Fear by European countries, Airbus and many airlines, that loss of sales of Airbus planes to China was a reason for “stopping the clock” for a year, on aviation’s inclusion in the ETS. Now a deal has been agreed that China will buy 18 A330s from Airbus.  Now inclusion of aviation in the ETS has been emasculated, Airbus is keen to sell as many planes as it can to China and returning to what it calls ‘business as usual’. The order that has now been announced is part of an earlier order for 45 wide-body jets, which are worth about $4n at list prices, although China may get a hefty discount on them.  There is also an order by the Chinese for 42 A320 narrow-body jets, worth  about $3.8bn though this deal had not been affected by the ETS debacle. Airbus, which is a subsidiary of EADS, hopes China will be its largest customer during coming 2 decades, buying large numbers of planes.  France, Germany and Britain continue to do all they can to build strong commercial ties with China, to boost exports and income. 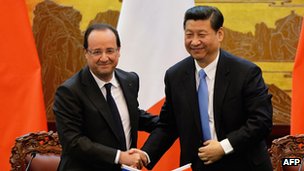 China has agreed to buy 60 planes from European firm Airbus, in a deal worth $8bn (£5.2bn) at list prices.

It is the first such deal since the European Union suspended the inclusion of foreign airlines in its controversial Emissions Trading Scheme.

China had voiced its opposition to the scheme, which charges airlines for the carbon they emit.

Last year, Airbus had alleged that China blocked firms from purchasing its planes amid the row over the scheme.

The deal was signed as part of a series of agreements during French President Francois Hollande’s two-day visit to China.

The European Union’s plans to introduce the Emissions Trading Scheme (ETS) have been met with a lot of opposition.

The scheme creates permits for carbon emissions. Once an airline exceed its allowance, it has to pay to buy extra permits.

The number of permits is also reduced over time, so that the total CO2 output from airlines in European airspace falls.

The supporters of the scheme say that it acts as an incentive for airlines to pollute less.

However, more than two dozen countries, including China, Russia and the US, have opposed the move, saying it violates international law.

Under pressure from these countries, the European authorities agreed in November to suspend the inclusion of foreign carriers in the scheme for one year.

Fabrice Bregier, chief executive of Airbus, was quoted by the Financial Times as saying that the “agreement shows that China recognises the efforts that Airbus and the EU have made to resolve the [emissions trading scheme] issue and is a step towards ‘business as usual'”.

By Andrew Parker in London and Hugh Carnegy in Paris

The EU’s decision to ‘stop the clock’ on including emissions from intercontinental flights in its Emissions Trading Scheme appears to have been influenced by Chinese threats to cancel orders for new planes from Airbus. A letter from the president of the French aircraft maker to China’s leading aviation official – seen by Reuters – says Airbus played an influential role in persuading the EU to give the world’s governments another year to reach agreement on how to tackle carbon emissions from air transport. T&E says European governments have effectively given China ‘a veto over European policy’.

T&E aviation manager Bill Hemmings said: ‘It is an extremely serious matter that Airbus has lobbied the EU to ‘Stop the Clock’ on behalf of China in such a brazen fashion. Airbus already enjoys massive financial support from the EU precisely because it is European, yet now appears to have put its own commercial interests before its legal obligations to uphold cornerstone EU environmental law aimed at protecting European citizens. There are also questions to be asked of the British, French and German governments, all of whom have significant claims in Airbus’ parent company EADS, who look to have caved in to China’s threats through Airbus’ lobbying. Where are we if our own governments hand the Chinese a veto over European foreign policy?’

November 12, 2012      The EU has announced that it will delay the date by which airlines have to pay for their emissions on flights to and from Europe. This is very disappointing news. However, they will only delay until there is progress by ICAO on producing a global deal on aviation emissions. If there is not adequate progress by ICAO when it meets in November 2013, the EU ETS will continue to include international aviation, as it does now. Flights within Europe remain in the ETS as before – whether by EU airlines or non-EU airlines – the change is only for flights to and from the EU. Connie Hedegaard, announcing the change, said EU member states will still have to formally endorse the Commission’s exemption for non-EU carriers. The change has occurred because of intense pressure from countries such as the USA, India and China – and lobbying from Airbus on fears the ETS is causing it to lose plane sales. China and India have far more to lose than us if they start a trade war, because they export far more to us than we export there. Nonetheless, the EU and UK have meekly conceded to blackmail from China instead of doing the right thing. We understand that David Cameron was lobbying the EU to defer ETS. It demonstrates, yet again, the UK and EU leaders prefer to sacrifice action on climate change in favour of narrow business interests. The EC has repeatedly said it only included aviation in the ETS after more than a decade of inaction at the ICAO. Unfortunately the concessions made by the EC are much larger than required, and there is no expectation that ICAO will come up with anything worthwhile in the next year.but on the positive side, the EC can no longer be accused of not doing anything in response to voluble continuing criticism over its approach to aviation and climate change.     Click here to view full story…

.which includes this:    A spokesman at the UK’s Department for Business said it was incorrect that his minister was calling for a suspension of aviation from the EU ETS.  “The UK is committed to reducing aviation emissions and to the role of the EU ETS in doing so,” he told GreenAir. “Like other European nations, the UK is keen to address issues that have been raised by a number of nations around the operation of the aviation element of the EU ETS. There was agreement by the European ministers at the Berlin Air Show that these issues need to be addressed through a global agreement to tackle aviation emissions. We recognise that a failure to resolve these issues could have a serious impact on the UK and European aerospace manufacturing and aviation sectors. We are pressing for faster progress in the International Civil Aviation Organization (ICAO) and other fora to secure a global solution which delivers on the EU’s objectives of continuing to reduce emissions from aviation.”

Airbus tries to get inclusion of aviation in ETS suspended. EU confirms no change.

September 13, 2012    There have been press stories suggesting that European officials backing Airbus are recommending the suspension of ETS in order to avert a trade war with major economic powers such as China and the USA. China and India do not allow their airlines to participate in the ETS because the charge is for the whole flight distance, not just the section over Europe. Beijing has blocked purchases of European aircraft (Airbus) by its carriers, so Airbus is unhappy about losing its fastest-growing market and is putting strong pressure on the EU as they may lose plane sales. Those backing Airbus want a “solution” before April 2013, but the matter is not due to be dealt with by ICAO till September 2013. Connie Hedegaard has confirmed that there are “no changes in EU and member states approach on the ETS and aviation” and this is just pressure from Airbus. The EU has repeatedly said it won’t give up its pollution curbs on airlines.    Click here to view full story…