Global air passenger demand up 5.9% in March and up 3.7% in February

IATA figures for global demand for air passenger travel show an increase of 5.9% (combining international and domestic) for March, compared to March 2012.  Latin America, the Middle East and China grew the most, (domestic flights within China increased about 12%). There was less growth in Europe and North America – with 3.6% and 2.8% respectively, but even this was substantial growth – though the timing of Easter, early this year, may have had an effect. For Europe, IATA comments: …” the trend for international travel on European airlines has been largely flat since October 2012, reflecting persisting weakness in the Eurozone economy and recent downward revisions to growth expectations for 2013. Nearly flat capacity growth of 0.4% helped propel load factor 2.6 percentage points to 81.2%”. So most European planes still have more than 18% of seats empty. For February, IATA said global air passenger demand rose 3.7% compared to February 2012. 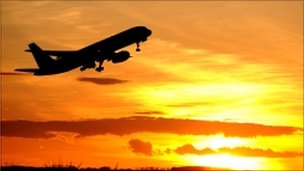 Iata represents 240 airlines accounting for more than 80% of global traffic.

Mr Tyler said in a statement: “Strong demand for air travel is consistent with improving business conditions. Performance, however, has been uneven.

He said US budget cuts caused by the fiscal cliff and other economic wrangles could have imposed flight delays and cancellations on travellers, causing “real damage to the economy”.

“Fortunately Congress and the [Barack] Obama administration put aside partisan political disputes for the good of the economy,” he added.

“But aviation is far too important to be treated as a bargaining chip in political disputes in the first instance. Let’s hope that lesson is well learned.”

Part of the rise may be attributable to traffic related to the Easter holiday, which occurred in March this year versus April 2012. But the seasonally adjusted trend continues to show strong growth, with demand expanding at an 8% annualized rate in the six months since October 2012. Capacity rose 3.5% compared to the year-ago period, pushing up load factor 1.8 percentage points to 80.3%.

“Strong demand for air travel is consistent with improving business conditions. Performance, however, has been uneven. Mature markets are seeing relatively little growth while emerging markets continue to show a robust expansion. Although oil prices have softened in recent weeks, they remain high against historical averages. In view of this, airlines are responding with a very cautious approach to capacity management,” said Tony Tyler, IATA Director General and CEO.

March international passenger demand rose 6.0% compared to the year-ago period, with capacity up 3.5%, pushing up load factor 1.8 percentage points to 79.9%. Compared to February, traffic rose 0.4%. The strongest growth occurred in the emerging markets of Latin America and the Middle East.

Domestic markets also experienced strong growth, with traffic up 5.7% in March versus a year ago. However, this masked wide variations among countries, with growth largely driven by China. Capacity rose 3.5% and load factor was 80.9%, up 1.7 percentage points.

Other recent IATA press releases on growth of air passengers, and growth/fall in air cargo, are: