Guardian looks into All-Party Parliamentary Groups, their lobbying, outside support and funding

Recent incidents showing Members of the House of Lords accepting money for lobbying have increased interest in the system of so called “All Party Parliamentary Groups”. The Guardian says that corporations and outside interest groups have funnelled more than £2.2m in sponsorship, research support and freebies to MPs and peers through all-party parliamentary groups, a rise of 22% since last year. The Speaker has suspended 80 Commons security passes pending a standards committee inquiry into the all-party parliamentary groups which give these passes to lobbyists, allowing them unsupervised and regular access to much of parliament and its accompanying offices. There is an All Party Parliamentary Group for Aviation, which receives benefits from industry lobbyists.  These groups allow those outside parliament to engage in informal discussion with MPs interested in a particular topic. There are concerns that these groups provide a channel for lobbyists to gain influence.

Research reveals £2.2m in ‘extras’ for MPs and Lords

Guardian research into all-party groups has found that these are providing more than £2.2m in perks for MPs 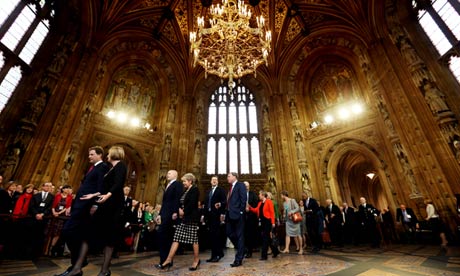 The central lobby at the House of Commons. Guardian research has found that all-party groups are receiving increasingly large sums of money. Photograph: Graeme Robertson for the Guardian

Corporations and outside interest groups have funnelled more than £2.2m in sponsorship, research support and freebies to MPs and peers through all-party parliamentary groups, a rise of 22% since last year, Guardian research reveals.

Patrick Mercer was forced to resign last week after a fake lobbying firm asked him to set up an all-party parliamentary group for Fiji. The sting operation by BBC Panorama / the Daily Telegraph has once again thrust these cross-party groups under the spotlight.

Late Monday, the Speaker suspended 80 Commons passes pending a standards committee inquiry into the all-party parliamentary groups (APPGs) groups which he began last year and which now has greater urgency.

Today Guardian research shows that the level of sponsorship, gifts and funding from these groups has risen for the second year running.

The value has increased by 22%, up from £1.8m which previous research revealed last year. The number of APPGs has also increased from 450 last year to 589 of these informal cross-party groups, each of which are listed as part of the register of MPs financial interests.

The ‘gifts, benefits and hospitality‘ received through these groups includes:

• A grant of £65,000 from BT to support the parliament choir. A full list of choir members is unavailable from their public site which requires a password.

• The Internet and Communications Technology group has the largest sums at its disposal – £0.2m including donations from Google, Vodafone and BT. Chinese firm Huwei, currently being investigated by parliament’s intelligence and security committee for its relationship with BT, also donated £200,000 to the group.

Peers and MPs were able to issue security passes to those working on APPGs, allowing them unsupervised and regular access to much of parliament and its accompanying offices – although this practice washalted on Tuesday after continued allegations about lobbying.

Members can also expect to be invited on trips abroad, a benefit listed in eight of the groups which the Guardian looked at. These included a visit to Hong Kong for the China APPG which was paid for by the Hong Kong government as well as a visit to Nigeria, £12,500 of which was provided by Shell International.

These groups allow those outside parliament to engage in informal discussion with MPs interested in a particular topic. There are, however, concerns that these groups also provide a channel for lobbyists to gain influence.

Guardian research identified that more than 60 (10%) of APPGs received some form of support from lobbying firms. The Skin APPG, whose purpose it is “to raise awareness of skin conditions” was one of many groups to have a consultancy firm providing its secretariat – a form of support which is not costed and therefore excluded from the total benefits received. Bellenden, a firm “specialising in political, planning and corporate communications”, whose clients include the Dispensing Doctors’ Association, oversees the £29,500 which the Skin APPG receives from various donors.

The research, compiled using ScraperWiki to gather data from the official register, is the third year that the Guardian has investigated these groups. The register is automatically updated every six weeks, and covers the previous 12 months to that date (most recent update at the time of writing is 29 April 2013). Since registration of a donation can be after this has actually taken place, it should be noted that the values provided here are estimates.

These new findings come as the Prime Minister faces additional pressure to deal with lobbying – an issue which he warned in 2010 would be “the next big scandal”.

Downing Street announced on Monday that a bill which would create a register of lobbyists would be brought before Parliament before the summer recess next month.

Read the full data on all-party groups at guardian.co.uk/data

There is an All Party Parliamentary Group for Aviation.

“To encourage interest in aviation and to arrange meetings and briefings on aviation issues with airlines, airports, the Civil Aviation Authority, trade unions and other relevant organisations and individuals.”

It lists Benefits Received from sources outside Parliament

* [AW note:  Mr Laurie Price works for aviation consultants, Mott  Macdonald. Their website says about him:
“Laurie Price MSc FCIT FRAEs is the director of aviation strategy for Mott MacDonald and former managing director of The Aviation and Travel Consultancy Ltd. He is an air transport economist specialising in economic, strategic planning, policy formulation and development studies for the industry. He has worked several traffic forecasting, due diligence, strategic planning and related studies for regulatory groups, governments, airlines, airports and others with an interest in airport investment and development. Laurie has previously worked in senior planning, marketing and commercial management positions with British Airways and British Caledonian Airways, including responsibility for route planning and budgeting route traffic and revenue. ” http://www.aviation.mottmac.com/aboutus/ourteam/
Laurie Price frequently chairs aviation conferences throughout the year as well as industry-sponsored fringe meetings at the autumn party conferences.  At one recent aviation conference in London entitled “Does London need more runways to remain globally competitive?” or some such similar title, he took fully 15 minutes for the ‘Chairman’s opening remarks’ arguing that there was no shred of doubt that London needed more runways to remain globally competitive. Which is not the normal behaviour normally expected from someone chairing a conference.  He is a dyed-in-the-wool aviation groupie – and especially a Heathrow groupie – which might just have something to do with the fact that BAA has been one of Mott Macdonald’s best customers over the years.

Lobbyists and all-party groups: get the data

The number of all-party groups is on the up – and so is the number receiving outside support or funding. Get all the detail here

For the third year running, the Guardian has investigated how much was donated to gatherings of MPs and Lords known as all-party parliamentary groups.

With the help of ScraperWiki the Datablog has again compiled a document bringing together hundreds of separate disclosure reports from all-party parliamentary groups.

Other key highlights from today’s story include:

• A grant of £65,000 from BT to support the parliament choir. A full list of choir members is unavailable from their public site which requires a password.
• A donation of £40,000 from Barclays and £40,000 from Prudential to the Trade and Investment group.
• The Internet and Communications Technology group has the largest sums at its disposal – £0.2m including donations from Google, Vodafone and BT. Chinese firm Huwei,currently being investigated by parliament’s intelligence and security committee for its relationship with BT, also donated £200,000 to the group.
• £8,227 and £5,227 from Heineken and Carlsberg respectively, donated to the Beer APPG.
• The ‘continence care’ all-party group receives support from the Absorbent Hygiene Products Manufacturers Association which acts as the group’s secretariat.

However, as we explained last year, this does not entirely overcome issues around political transparency. Numerous entries describe how donors “meet the cost of various small dinners” or “act as the groups secretariat” – suggesting that the services which these groups benefit from may be underestimated.

To be recognised by Parliament, all-party groups must be open to all Members of the House of Commons and the House of Lords. They must also include at least 10 Members from the political party in government and at least 10 who are not from the government party. Not being recognised by Parliament, and having an unofficial status may be beneficial to those who are looking to exclude the support they receive from the public register.

We’ve published the full details from the register of interests below. Have you seen something interesting? If so, let us know by posting a comment, or by contacting us via Twitter at @GuardianData or @MonaChalabi.

The Times – on the questionable lobbying of MPs on Parliamentary All Party Groups, such as the one on aviation

The Times, writing about the lobbying by industry of parliament, says of the Commons all-party group on aviation that is one of a large number of such groups that are not official bodies. There is concern about the extent to which these all-party groups get a lot of funding from companies, and produce reports that do not properly declare the degree of influence that has been exercised by outside interests.  The Times reports on how the all-party Parliamentary Aviation Group produced an report in August, on the subject of Air Passenger Duty (APD) and its effect on the aviation industry. It did not clearly declare that it was produced “with help from” airlines, travel companies and airports through the “A Fair  Tax on Flying” campaign group, which wants APD cut for reasons of self interest, to increase the amount of air travel. The report, being biased towards the airlines, ignores the other side of APD – that it is in compensation for airlines paying no fuel tax and no VAT.https://www.airportwatch.org.uk/?p=962

29.8.2012A report has been produced by the All Party Parliamentary Group on Aviation, looking at the effect of APD and the economic impact of aviation in the UK. It said efforts should be made “to ensure the UK retains and grows hub capacity” at Heathrow or a new purpose-built hub airport.  It is very much a report from the point of view of the aviation industry.  It is important to stress that this is not a formal select committee of Parliament.  It is just a group of MPs who are enthusiastic about aviation.  It has no official standing.  By contrast, the official Parliamentary Select Committee on Transport will start an investigation into aviation in September, and that is the report people will take seriously.  One of the APPG report’s many pro-aviation-expansion recommendations is that the “Government develop a comprehensive growth strategy for aviation that addresses all “barrier” issues in a coherent and consistent manner.” With little regard to environmental constraints on growth.

31.10.2011A report by the All Party Parliamentary group on social tourism wants there to be more money spent on encouraging families to take holidays together. Though much of the backing comes from airlines and travel firms like Thomson who want families to travel abroad, there is much support for badly off families to use spare holiday accommodation out of season within the UK for inexpensive holidays, thus also boosting UK tourism.https://www.airportwatch.org.uk/?p=334