Birmingham Airport is expected to announce shortly that it is considering building a 2nd runway, and submit its plan to the Airports Commission. The airport wants to be considered as a major part of Britain’s aviation plans for the future, and could be a hub for European airports.  Back in 2007 the airport’s plans for a second runway, in its Master Plans, were dropped in favour of the runway extension – due to open in 2014. If HS2 is built, Birmingham airport intends to benefit from it. Proposals include another terminal, incorporating HS2, as well as the  runway. It is thought that  the airport will say, in its submission, that the runway may not be needed for a long time, even decades as it currently caters for some 9 million passengers and could take over 25 million on its one runway. The airport’s plans are reported to be supported by the West Midlands Economic Forum which will release a report expected to say that there is plenty more potential growth for Birmingham Airport as the world economy grows. MP Mark Garnier said the airport needed to capitalise on being at the heart of the motorway and potential high-speed rail networks.


Birmingham Airport is expected to announce on Monday that it is considering building a second runway.

It is in response to the Airports Commission which is looking at how Britain can meet demands for air travel in the future.

It is a question which has triggered the suggestion of Boris Island, or the expansion of Heathrow.

Now Birmingham Airport will join in the debate saying it could build a second runway.

As long ago as 2007, Birmingham Airport said it wanted to expand the current runway and have a second.

It has got the extension, but the second runway plan went on the back-burner.

And then High Speed 2 came along. With the proposed line running to the east of the airport – the most likely place for a station would be in a brown field site along the M42 corridor.

If the HS2 station is built there it would make sense for Birmingham Airport to put its new terminal and runway near there too.

Birmingham Airport has always said it wants to considered as a major part of Britain’s aviation plans for the future.

It is also said in the past that it wants a second runway but that idea was shelved.

On Monday it is expected to make that concrete with an announcement that a second runway is a viable option, admittedly not for several years, perhaps even decades.

Its plans are being supported by the West Midlands Economic Forum which will release a report expected to say that there is plenty more potential growth for Birmingham Airport as the world economy grows, but if the airport itself is not allowed to grow it could get left behind. 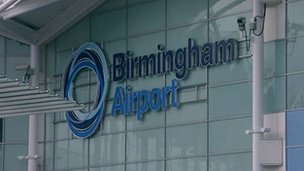 Birmingham Airport has the potential to become a hub serving north-west Europe, a West Midlands MP has said.

The airport will unveil details of a 50-year plan for growth when it submits recommendations to the commission examining UK airport policy next week.

Proposals include another terminal, incorporating HS2, and a second runway.

MP Mark Garnier said the airport could make a “global” statement, but a Solihull councillor said proposals have been drawn up by “economic dinosaurs”.

Managers at the airport, where work is being carried out to extend its runway, are due to submit plans to the commission headed by Sir Howard Davies on Monday.

The airport’s public affairs director, John Morris, admitted HS2 was an important element of their proposals but said a potential second runway on a nearby landfill site was not yet needed.

Mr Morris said: “At the moment we deal with about 9 million passengers a year.

“You could put another 27 million passengers off [the current] runway which is more than a third runway at Heathrow would give you so it’s a good time yet before we’d have to look at [a second runway].

Mr Morris added the UK needs a network of national airports and said using its current runway to maximum capacity could lead to the creation of 243,000 jobs across the region.

Mr Garnier said the airport needed to capitalise on being at the heart of the motorway and potential high-speed rail networks. 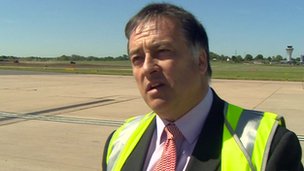 Birmingham Airport’s John Morris said 243,000 jobs could be created
“By having a much bigger airport, we’re now connecting all those businesses in places like Kidderminster, where I represent, with the global markets of the Far East and Latin America.

“There is potentially the room to expand it into a major airport. Not just a hub for the region but a hub for north-west Europe.”

But Solihull councillor Chris Williams, from the Green Party, said London would reap the benefits of any expansion.

Mr Williams said: “Birmingham Airport’s proposals are very much macho plans, but I think they’ve been drawn up by economic dinosaurs.

“[It will] get people flying into Birmingham, going off on HS2, supporting the London economy, doing nothing for us in the West Midlands.

“We’re just going to see the concreting over of the countryside between Birmingham, Solihull and Coventry and the lesion of the Meriden Gap through airport expansion and HS2.”

Birmingham Airport officially scrapped plans for a second runway in 2007.

Birmingham Airport officially scrapped plans for a second runway in 2007. But the idea has not been ruled out forever.

And supporters of the airport are increasingly talking about the benefits it would bring.

I don’t want to be alarmist about the prospect of a second runway at the airport, which hasn’t yet completed the long-awaited extension of its first runway.

If it ever happened it would be hugely controversial, and I think it’s safe to assume hugely unpopular, with the people living nearby.

There are no plans to build a second runway now. No announcement is imminent, certainly not so far as I am aware.

But it’s something of an elephant in the room. We know it’s still an option, but nobody wants to talk about it.

Birmingham Airport has won a very effective lobbying campaign to convince government ministers to make more use of “regional” airports.

Or perhaps I should say “airports outside the South-east”, as one if its goals is to be named a “national airport” and ditch the regional label.

This campaign has focused on the fact that Birmingham could double the number of passengers it serves, from nine million today to 18 million, without any new infrastructure.

And the planned extension of its existing runway will allow it to cater for 36 million passengers, and provide services all over the world (a larger runway allows larger planes, capable of crossing the globe).

But the airport’s campaign goes further than that. The gist of its message is that the Government should not build a new runway at Heathrow, nor go ahead with Boris Johnson’s plans for a brand new airport.

In other words, it is presenting itself as a potential answer to the question of how Britain can get the additional “hub” airport capacity it needs. That’s an airport where passengers change planes mid-journey.

If Birmingham is to fulfil that role, it would almost certainly need a second runway. And Midland MPs are quietly lobbying at Westminster for it to be allowed one.

Campaigners have called for Birmingham Airport to forever banish all plans for
a 2nd runway. Chris Crean,(West Midlands FoE), and Gerald Kells (CPRE), asked
for assurances from the airport during the Examination in Public into the West
Midlands Regional Spatial Strategy. They were calling for an amendment to the
draft document which appears to give local authorities the option to “safeguard”;
land near the airport that could be used for a 2nd runway.(Post)         Click here to view full story…

Plans to extend the runway at Birmingham finally got the go-ahead from Solihull
Council. Birmingham Airport had to resubmit its proposed Section 106 agreement,
which explained how it planned to counteract noise pollution and to protect the
environment. The planning committee approved the 400-metre extension in December
– subject to the amended guarantees now agreed. Expansion will enable bigger jets
to fly non-stop to long-haul destinations. (B’ham Post)   Click here to view full story…

News there will be no second runway at Birmingham International Airport has been
welcomed by the MP representing hundreds of families whose homes were blighted
by the plans.

Caroline Spelman (Con Meriden) said she welcomed the announcement, which would
end years of uncertainty for constituents. The airport confirmed that plans for
a second runway will be suspended until at least 2030, when it published the final
draft of its master plan.

[The airport will be]  extending the existing runway by 405 metres, allowing it
to accommodate larger aircraft and offer more long-haul flights.

But the predicted growth in passenger numbers has been reduced from earlier forecasts
of 31.7 million by 2030.

The Master Plan states: “A second runway should not be needed before 2030. Consequently, a new second runway has not been included in this Master Plan, but, as the forecasts are reviewed, over future periods, runway capacity and the need for a second runway could be reconsidered.”

The airport is also to aim to ensure a quarter of all passengers travel to it by public transport by 2012.

Birmingham International Airport is the UK’s second largest airport outside London and the sixth largest [in the UK] overall. It directly provides 7,500 jobs and is estimated to contribute some £272 million to the regional economy.

Great Britain: Birmingham Airport opened its new draft master plan for public comment. The plan includes extending the 2600-m runway to 3000 m, building a second runway and a third passenger terminal to handle 33 million passengers and 278,000 traffic movements a year expected by 2030. The U.K. Government identified Birmingham
as the preferred location for a new runway in the Midlands in a 2003 report. The Government says the extra capacity will be needed by 2016. — The draft master plan comment period will close on 31 March 2008. Birmingham is set to handle nearly
10 million passengers in 2007 and now serves 126 scheduled and 44 charter airlines.

More news stories about Birmingham Airport over the  years at