A group of 9 British and Norwegian passengers have begun legal action against Airbus and Aero Engines, after the BA plane made an emergency landing at Heathrow in May. The flight to Oslo had to make an emergency landing, soon after take off, as the engine covers few open and fell off during take-off.  The cover on the right engine split a fuel pipe on the engine which subsequently caught fire. The plane flew back with an engine burning, right across London, but  landed safely and though passengers had to use the emergency shutes, no-one was hurt. The covers had not been closed and locked properly following maintenance checks the night before.  The 9 passengers have now filed a complaint in the US saying that they have suffered severe psychological trauma as a result of the emergency landing, which has affected their personal and professional lives. There have been more than 30 other cases when engine covers have not been closed properly. It is likely that there will be more passengers joining the claim, which could total $25m. 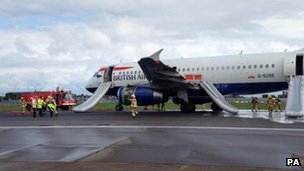 All 75 passengers and crew were safely evacuated from the aeroplane

A group of nine British and Norwegian passengers have begun legal action after a British Airways plane made an emergency landing at Heathrow in May.

Flight 762 was bound for Oslo in Norway with 75 passengers on board when the engine covers fell off during take-off.

One of the covers split a fuel pipe on the right hand engine which subsequently caught fire.

The plane turned around and landed safely, after which everyone left down the escape slides. No-one was hurt.

According to an interim report by the Air Accidents Investigation Branch (AAIB), the covers had not been closed and locked properly following maintenance checks the night before. The AAIB urged airlines and pilots to double-check their planes before take-off.

Nine people have now filed a complaint in the US saying that they have suffered severe psychological trauma as a result of the emergency landing, which has affected their personal and professional lives.

Law firm Stewarts Law LLP, which is representing the passengers, claims that in the past, there have been more than 30 other cases when engine covers have not been closed properly.

One of those on board, Alexandra Townsley, told lawyers: “It was absolutely terrifying. My sister and I had a clear view of the engine fire. I remember thinking to myself that I was going to die.

“I am angry to now discover that this had occurred so many times before and the airlines and manufacturers do not appear to have done anything about it.”

The legal action is against Airbus, which made the aircraft, and International Aero Engines, which made and sold the engines.

It is not, however, against British Airways, despite the fact that it was their plane.

I am told that more passengers are likely to join this claim, which could total $25m (for a bit of context, I understand the Asiana accident in San Francisco recently could end up in a claim for $250m).

But there is a long way to go yet. It could be many months before we get the final report from safety investigators detailing exactly what went wrong with Flight BA762.

Airbus said it did not comment on litigation matters.

June 1, 2013      Richard Tracey, London Assembly Member for Merton and Wandsworth, has written to Heathrow authorities to ask why the BA aircraft with its engine ablaze was routed to fly back into Heathrow last week rather than being diverted elsewhere. Richard’s questions followed worried enquiries from Wandsworth councillors Rosemary Torrington and James Maddan who represent the riverside Thamesfield ward on the flightpath. He received a prompt response Heathrow’s Government Relations Manager: “The normal procedure in these circumstances if for the Captain to decide what is the safest course of action, and this is what happened in this case. This is an approved procedure.” Richard Tracey commented that the damaged aircraft flew over Slough, Watford, parts of Essex, Battersea, Putney, Chelsea, Fulham, Hammersmith and Hounslow. “This is complete madness. Three or four million people on the ground were put at risk and thousands of travellers from Heathrow had their flights cancelled. Incoming flights were diverted to Stansted, Luton, Cardiff, even Manston”. “We are now seriously considering taking this further , including talks with Heathrow and British Airways.”      Click here to view full story…

Heathrow emergency landing of BA plane with engine on fire: Engine cowls had been left unlatched

May 31, 2013     Air accident investigators say the doors on both engines of the BA flight that made an emergency landing at Heathrow last week had been left unlatched. This was due to human error. Air accident experts said the coverings – the fan cowl doors – broke off and punctured the right engine’s fuel pipe, damaging the aircraft’s systems. The engine was extensively damaged. The jet flew back to Heathrow, on one engine, with smoke trailing from the other, right across heavily populated London. It landed safely. The findings were made in an interim report by the Air Accidents Investigation Branch (AAIB), which is examining the cause of the emergency It will make its final report in a couple of months. The fan cowl doors on both engines were left unlatched during maintenance and this was not identified prior to aircraft departure. BA confirmed that 2 different engineers would normally check whether a plane’s engine covers had been shut before take-off. David Learmount, former pilot: “This is a bit of an accident waiting to happen because it is so difficult to see”. Airbus said there had, in the past, been 32 reported incidents of fan cowl doors not being shut.   Click here to view full story…

May 24, 2013     While a BA plane limped back right across London, flying over miles of the city and thousands or hundreds of thousands of Londoners, with one burning engine and the outside of the other damaged – the media seem not even to consider the safety aspects of the story. It seems the cause of the problem could be a technical fault with the plane, rather than a bird strike. The Telegraph writes about the large number of passengers getting away for the bank holiday weekend, and how their flights are delayed. Simon Calder writing in the Independent takes the opportunity of heading his article “Emergency landing at Heathrow sparks further controversy over London airport capacity” though he does have the decency to add one comment from a member of the public in his piece to say that “London is one of the very few cities in the world that has its main flight paths over the city. A very serious accident is not a question of if, but when.”   Click here to view full story…

May 24, 2013   A British Airways flight (BA 762) from Heathrow to Oslo was forced to turn back immediately after take off, due to what is likely to have been bird strike. The Airbus A319 was powered by two IAE V2500 engines. The left engine appears to have hit an object at take-off, which stripped off the engine cowling. The right engine then may have hit something, and there are observer accounts of a bang. The plane did a large loop around London, in order to land again, using only the left engine. Many observers saw, and recorded, the plane – trailing smoke from the right engine, as it flew right across London. The plane made a safe landing, though passengers were evacuated down emergency chutes, and there were only 3 minor injuries. Heathrow airport was disrupted for hours due to the emergency landing. While those in favour of expanding the airport are likely to use this dangerous incident to call for more airport capacity (so Heathrow can cope with incidents without delays) it would be more relevant and more responsible to question how safe it is to have disabled planes flying miles over densely populated London. Luckily this time, there was no crash. With Heathrow airport hoping to get another runway (or two) the safety issue of flying more and more planes over hundreds of thousands of people has to be confronted.    Click here to view full story…