Economist: Proposed EU rules on state aid aim to stem the flow of money from taxpayers’ pockets to Ryanair

Article in the Economist gives a useful set of insights into airport subsidies at small airports across Europe, which are now due to be reduced after consultation. The Economist says Europe has over 450 airports, mostly small and loss-making. About 85% are publicly owned. Local politicians’ enthusiastic sponsorship of airports, to boost regional economies, has in turn contributed to the rapid growth of low-cost airlines, since the airports have used their subsidies to offer cheap landing fees and other sweeteners to persuade the cheap carriers to fly there.  Ryanair is the sole or dominant carrier at many of the airports under investigation, and has been getting effective subsidies of as much as €11 per passenger. There may be as much as €3 billion of taxpayers’ money given in EU-approved aid to small airports each year, and more that is not sanctioned.  EU laws ban state aid if it seriously distorts markets and though there have been many investigations into this, none has yet reached a conclusion. Some smaller airports will find it hard to pay Ryanair and other budget airlines enough to keep them flying there. With tighter rules, some of the 80-odd European airports with under 1m passengers will be at risk of closing.
.
Tweet

Proposed EU rules aim to stem the flow of money from taxpayers’ pockets to Ryanair’s coffers. That could doom some small airports, and increase some fares 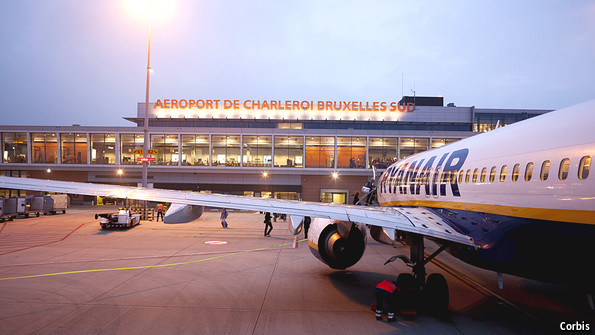 ANGOULÊME airport in south-west France, like many small provincial airports across Europe, more closely resembles a motorway café or a visitors’ centre at a minor battlefield than an economic hub. And since scheduled flights ceased in 2010 it cannot even count on the trickle of visitors a second-tier historical site might expect. Yet Angoulême is a battleground in a conflict that pits European regional development against fair competition, and low-cost carriers against full-service airlines.

Europe is peppered with over 450 airports, mostly small and loss-making. About 85% are publicly owned — this week the Scottish government said it would buy Prestwick airport near Glasgow, following the Welsh government’s nationalisation of Cardiff airport in March.

Local politicians’ enthusiastic sponsorship of airports, as a means to boost their regional economies, has in turn contributed to the rapid growth of low-cost airlines, since the airports have used their subsidies to offer cheap landing fees and other sweeteners to persuade the cheap carriers to fly there.

Transport & Environment, a green lobbying group, reckons that about €3 billion ($4 billion) of taxpayers’ cash in EU-approved aid finds its way to airports each year, and plenty more that is not sanctioned.

But EU laws ban state aid if it seriously distorts markets. Indeed, 60 airports, from tiny Angoulême to Brussels Charleroi, which handles over 6.5m passengers a year, are under investigation for providing aid that breaches the rules. None of the inquiries has yet reached a conclusion.

Small airports deserve subsidies, argues ACI Europe, a trade body that represents them, because their fixed costs—from security and runway maintenance to mopping floors—are far higher per passenger than at bigger ones.

The low-cost airlines have plenty of airports to choose from, as do their passengers: nearly two-thirds of Europeans are within two hours’ drive of at least two airports. So in 2011, even as carriers opened up many new routes, they closed 15% of existing ones.

Ryanair is the sole or dominant carrier at many of the airports under investigation. The discounted landing and baggage-handling fees it gets, and the payments it receives for promoting the airports on its website, are an important part of its business model.

Leipzig-Altenburg airport in Germany—another of those under inspection by the European Commission—in effect pays Ryanair a fee for each passenger it sends there. The commission has let it keep the amount a commercial secret, but a report on Angoulême said it had been paying Ryanair about €11 a passenger.

Guidelines on state aid introduced in 2005 let airports offer some inducements to airlines to start up new routes. But by common agreement the rules are cumbersome, inflexible and unenforceable, especially now that the power in the relationship between airports and low-cost airlines has swung dramatically in favour of the latter. Even Michael O’Leary, Ryanair’s boss, with customary bluntness, calls the rules “lunatic”.

The full-service airlines, their businesses devastated by low-cost competition, have filed complaints against Ryanair and its benefactors. But in the scramble to win flights, local airports are continuing to seek ways to sidestep the rules.

To speed up a resolution of the cases, many of them years old, and to clarify what would be acceptable in future deals between airports and airlines, in July the commission proposed a new set of rules, for which the consultation period has just ended.

The new rules are likely to come in next year.

The aim is to reconcile the principle of fair competition with the airports’ role in boosting small towns’ economies and keeping them connected to the outside world.

State subsidies towards operating costs at airports handling over 200,000 passengers a year will be phased out over ten years, and charges to airlines must rise to compensate. However, airports will be able to offer below-cost charges to airlines for up to two years if they can show a business plan that eventually allows them to turn a profit.

Mr O’Leary, in a rare show of assent with the Eurocrats, says the new rules are “terrific”. That may sound odd: their objective is to eliminate the state aid that flows to his airline. But Mr O’Leary is a realist, so he probably sees the new rules as the best he could hope for, given the pressure on the commission to ensure fairer competition. Besides, there may be tussles in Brussels as the transport directorate, which is fond of subsidies, arm-wrestles the more free-market directorate for competition into softening the new rules to let more of the handouts to airlines continue.

The loudest complaints against subsidies have come from big airlines. Air France is responsible for 20 cases against airports in its home market. But it may be hard to find much sympathy for airlines that were themselves born and bred from state coffers. Some taxpayers may not like lining Ryanair’s pockets. But as Olivier Jankovec of ACI Europe says, the local economy also benefits, and these advantages are not protected by the new rules.

One broad basis for judging subsidies—whether they would be paid in a free market—is too narrowly applied, he argues. An unsubsidised small airport would not pay several euros to attract each passenger but local hotels, shops and other businesses might. This, says Mr Jankovec, justifies taking a more relaxed attitude to state aid.

So it makes sense for the commission to try to curb the subsidies. But if its new rules achieve this objective, the result will be that some smaller airports will find it hard to pay Ryanair and other low-cost carriers enough to keep them flying there.

Many of the 80-odd European airports with fewer than 1m passengers will be at risk of closing, like Angoulême; in other cases passengers will face higher ticket prices. And some of Europe’s less-famous spots will see fewer tourists.

18.9.2013Under the European Commission, state aid is granted to various sectors of the economy. However, a key issue is the impact it has on distorting the market, and giving an unfair advantage to those companies or organisations receiving it. Airports and airlines are one sector that receives large amounts of state aid through the EC. The Commission’s DG Competition is tasked with overseeing state aid. There have been earlier sets of guidelines on state aid to airports and airlines, but there is a current consultation – due to end on 25th September (which may be extended). The exact amount of state aid given to the aviation sector is somewhat shady, but is at least €3 billion, for those subsidies that are fully notified.There have been widely publicised cases, such as that of Ryanair at Charleroi airport. Transport & Environment have produced an easy-to-read briefing on the state aid situation, and people are urged to respond to the consultation. The state aid gives the aviation industry unmerited subsidy, and helps to encourage very high carbon travel.https://www.airportwatch.org.uk/?p=17424

26.9.2013London Mayor Boris Johnson said EU proposals barring the use of state aid for the construction of airports serving more than 5 million people a year would undermine plans to grow the UK’s aviation capacity.  Government subsidies for large airport projects, currently assessed on a case-by-case basis, would be outlawed starting in early 2014, whether for new infrastructure or upgrades of existing facilities, according to the draft EU guidance. In his letter to the Competition Commissioner, Joaquin Almunia, Boris wrote that there are “unintended and potentially catastrophic consequences” in “tying the hands” of member states, and he said the measures would limit London’s ability to expand vital links to emerging markets in Asia and South America [which, of course, is nonsense]. Boris said the new EU rules would limit London to expanding terminal capacity at existing airports with less ambitious, and more easily financed,  plans than his over-ambitious Thames estuary schemes. TfL said in its submission that a new hub as envisaged by Boris requires an estimated £20 – 30 billion pounds of state investment. The EU consultation on state aid to airports and airlines has just ended, and the EU will now start to analyze feedback received.  https://www.airportwatch.org.uk/?p=17617

19.9.2013There is currently a consultation under way, on EU guidance on state aid to airports and airlines. This consultation ends on 25th September, unless it is extended. A paper by Rose Bridger, in July, sets out details of the extent of state aid to failing airlines across Europe. There are truly remarkable sums involved.  The EU regards bail outs for failing airlines as restructuring aid, rather than merely aid for infrastructure or new route development. Some of the cases that Rose has located information on are for national flag carrier airlines. For example, the Hungarian national airline, Malev, received well over €300 million; Scandinavian airline SAS received a €400 million credit facility from three governments; Latvian airline Air Baltic got at least €100 million in share capital; Air Malta got well over €180 million over several years; Polish LOT airlines has had at least €100 million, and likewise for Estonia Air and Czech airlines. Support for airlines brings a disproportionate benefit to wealthier citizens, who fly more. Continued bailouts to airlines exacerbates the financial instability caused by excessive debt.

3.7.2013The European Commission published new draft guidelines that will allow regional airports and EU airlines using them to keep receiving subsidies worth as much as €3bn a year. The consultation lasts till 25th September. In several cases the EC subsidies prop up unprofitable regional airports and low-cost carriers, so they can continue to operate in an unsustainable way which distorts competition between budget and national carriers. Commercial airlines can receive subsidies to establish and run new routes from financially non-viable airports. Transport & Environment (T&E) have expressed their disappointment about this, and that the draft guidelines to not go far enough to prevent the continued construction of f trophy” airports by regional administrations, which end up under-used or even permanently closed and invariably add unsupportable financial burdens on regional coffers.  T&E say scarce taxpayer money should be put to better use.https://www.airportwatch.org.uk/?p=1574