The American Flying Clean Alliance took flight and buzzed the 38th Assembly of the International Civil Aviation Organization in a plane trailing the banner, “Can’t Spell Procrastination Without ICAO.” The flyover took place as delegates from 191 countries entered the assembly to again consider controls for aviation CO2.  Flying Clean said ICAO has been talking about dealing with carbon pollution from planes for 16 years, but doing nothing. ICAO  needs to know that the world is watching and expecting action. The Flying Clean Alliance, in the USA, represents thousands of elite frequent flyers and tens of thousands of everyday flyers who believe the aviation sector needs to stop blocking meaningful action on climate. The ICAO vote is expected on 2nd October, when they need to agree to a global market-based system to curb aviation climate emissions in 2016, which would go into effect in 2020. Global aircraft emissions are anticipated to almost double by 2020, if the industry expands as much as it hopes it will. This increase comes after 16 years of conversation since ICAO was first charged with addressing aviation and climate. That’s procrastination for you. 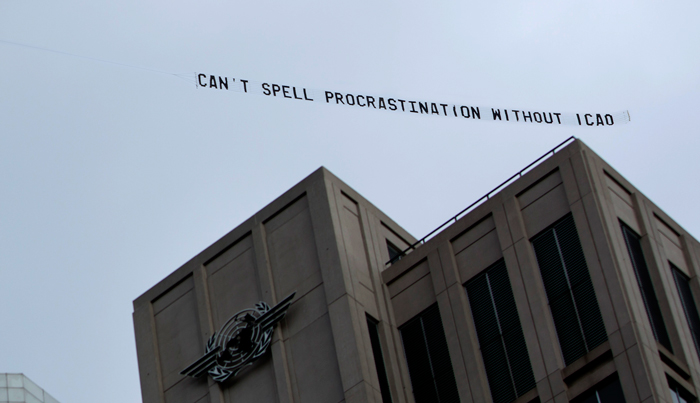 “Photo ©Guy Lavigueur”The Flying Clean Alliance took flight and buzzed the 38th Assembly of the International Civil Aviation Organization in a plane trailing the banner, “Can’t Spell Procrastination Without ICAO.” The flyover took place as delegates from 191 countries entered the assembly to again consider controls for climate pollution from airplanes.

“To quote noted aviation philosopher Maverick, ‘Sorry Goose – but it’s time to buzz the tower,’” said Flying Clean Alliance Director Shelby White. “ICAO has been talking about dealing with carbon pollution from airplanes for 16 years, but doing nothing. They need to know that the world is watching and expecting action.

“If they can deliver, it will be a major accomplishment for the climate,” White said.

The Flying Clean Alliance represents thousands of elite frequent flyers and tens of thousands of everyday flyers who believe the aviation sector needs to stop blocking meaningful action on climate.

Tomorrow, ICAO is expected to vote on an agreement to agree to a global market-based system to curb aviation climate emissions in 2016, which would go into effect in 2020, when airplane emissions are projected to be double what they are today.  This comes after 16 years of conversation since ICAO was first charged with addressing aviation and climate.

“For a long time, ICAO has been kicking the can down the runway,” said White. “Every reporter covering the proceedings should review ICAO’s statement of policies on the environment, because you see goals pushed off again and again. With all the missed deadlines crossed out and rewritten and deferred expectations, it would be funny if it wasn’t such a waste. The Macarena was the number one song in the world when they started working on this.”

“ICAO can’t just keep playing it’s old game of promising climate action – next time, and then failing to deliver. Climate change is costing the aviation industry billions of dollars in cancelled flights from extreme weather, and hurting the whole planet. The latest IPCC report on the risks of climate change shows that the aviation industry must do its part to address its pollution, and that means action, not empty promises.”

You can go here for more on the Flying Clean Alliance, and here to see a version of the ICAO working paper showing how their own documents highlight repeated delays over the last 16 years [PDF].

October 1, 2013    .A report from the Manchester Metropolitan University shows that the emissions from global aviation will continue to have a climate impact for years and decades after they are emitted. CO2 stays in the atmosphere for a long time, and continues its warming impact. For this reason, the proposal of the aviation industry to go for “carbon neutral growth” after 2020 will have the effect of increasing the climate impact of aviation. “Carbon neutral growth” in the way the industry sees it, by use of reductions in CO2 emissions from technical, operational and biofuels measures, will not keep emissions and their climate impact low enough. For there to be real “carbon neutral growth”, so argue Transport & Environment in Brussels, and the Aviation Environment Federation in the UK, requires an effective market based measure MBM) as well. The MMU report concludes that to mitigate aviation’s climate warming impact in 2050 through carbon neutral growth in 2020 will require a basket of measures, including MBMs, (such as the EU ETS) to bridge the gap between what can be achieved by the industry and ICAO’s proposed measures, and what is actually needed.    .Click here to view full story…

September 25, 2013      .It is deal time in Montreal. Over the next two weeks 191 countries will decide what to do about climate-warming emissions. If aviation were a country, it would be the 7th largest emitter in the world, based on CO2 alone. And aviation emissions are set to triple by 2050, so this is no small task. Aoife O’Leary, who is Sustainable Shipping & Aviation Officer, for Transport & Environment in Brussels, writing in the Huffington Post, says of the current position on the EU ETS, that the recent offer by the EU to only regulate aviation emissions in EU airspace would mean 60% less intercontinental emissions than were covered by the original law. Even if every country regulated aviation emissions in its own airspace, that would still mean 78% of global emissions would still not be included, with flights over international waters and third countries uncovered. Aoife says a far more sensible and politically viable solution would have been to revise the ETS on the basis of a 50/50 system, which means each country regulates half the carbon of each international flight.That means countries such as the US that do not want to be regulated do not need to include emissions in their airspace but the EU continues to exercise its sovereignty over flights landing at its airports.   Click here to view full story…

September 24, 2013      .The ICAO draft resolution to be considered by the 38th Assembly later this week appears equivocal on whether to adopt a global market-based measure (MBM), leaving it to the 39th Assembly in 2016 to make a decision. However, environmental NGOs say that evidence shows early action must be taken to ensure the climate impact from rapidly increasing aviation emissions is minimised. In a submission to the Assembly by their representative body, the International Coalition for Sustainable Aviation (ICSA), they call for ICAO member states to agree now to develop a global MBM for adoption in 2015 and implementation in 2016. This would be 4 years earlier than the aviation industry is calling for under its “carbon-neutral growth” target (CNG2020). This would require the holding of an Extraordinary General Assembly in 2015, which although not unprecedented would be highly unusual. The NGOs are convinced, and backed by recent research, that a global MBM is the only feasible way to get meaningful CO2 reductions.     Click here to view full story…

September 20, 2013     .A long and comprehensive piece in Aviation Week, discusses the likely outcomes from the ICAO Assemby, on the issue of aviation carbon emissions. The most likely scheme to be agreed in the next two weeks is for aircraft emissions during the part of the flight in EU airspace (including Iceland, Liechtenstein and Norway) to be taxed. There are some technical challenges in implementing it. It would not include overflights. Whether ICAO’s 191 contracting states will support the deal at the Assembly is not known, but according to one commentator: “it seems unlikely that delegates will wish to reopen substantive debate on such a hard-won consensus text.” However there are concerns about the impact of this tax on European airlines. The Federal Association of German Aviation and Space Industry, of which Lufthansa is a founding member, objects to the compromise, claiming it represents “a massive distortion of competition for European airlines.” The European Low Fares Airline Association also says it is discriminatory. An effective market based measure agreed globally still seems a very long way from agreement.     . Click here to view full story…

An NGO message for the ICAO Assembly: Introduce a global market-based measure now

September 18, 2013     .The Assembly of ICAO (the International Civil Aviation Organisation) takes place in Montreal between 24th September and 4th October. A decision on how to deal with global aviation emissions needs to be taken – if aviation globally was a country, it would rank 7th highest, after Germany. It is widely acknowledged that a market based measure (MBM) would be the most effective mechanism through which to do this. James Lees, from the Aviation Environment Federation, and Bill Hemmings, from Transport & Environment, writing in GreenAir online, say the solution to aviation’s runaway emissions is a “global MBM decided on now and to be introduced by 2016. It is no longer an option for continued disagreement in ICAO to prevent action on aviation’s contribution to climate change. At a time when President Obama has said so much about leading the way [on climate], the White House must finally ensure that the US becomes the global leader for action at the ICAO Assembly. It is time for everybody to take responsibility, stop shielding such a high emitting industry and act….now.”     .Click here to view full story…

September 6, 2013      The EU has agreed to a deal to scale back its inclusion of aviation in the ETS as UN negotiators at ICAO agreed at talks in Montreal to only include emissions from flights over European airspace. This is a substantial scaling down of the initial plan to include all flights to and from Europe. The ICAO deal, which still needs to be signed off by a full meeting ending October 4th and by EU lawmakers, was immediately criticised by green groups. ICAO will delay implementing any more effective mechanism for another 7 years. The deal falls short of the worldwide pact the EU had hoped for in November 2012 when it exempted foreign flights for one year (“stopping the clock”) to give ICAO more time to develop a global deal. At present airlines need only surrender carbon permits for flights within the EU, so requiring permits for the miles in European airspace is a slight improvement. However, it means that for a long haul flight to or from the EU, most of the carbon is not included in the ETS. Peter Liese, a senior member of the EU Parliament, said “It is far from an ideal solution… (but) I’m really concerned that if we just oppose what is on the table then we may see a total collapse of our effort.”    Click here to view full story…

August 30, 2013     A global deal to reduce emissions from the aviation industry is looking increasingly unlikely to be agreed at the ICAO international negotiations taking place next week in Montreal. The text is still in its draft stage, and will be debated by the ICAO Council on the 4 September before being presented to the General Assembly on the 24th. It proposes that states should work towards the development of a market based mechanism (MBM) to reduce emissions. But in a move branded by NGOs as “disappointing” and promising little except more talk and delay, it states that no decision will be taken until the 39th General Assembly in 2016 – one year after countries are set to cement a binding UN climate agreement in Paris. The document requests the ICAO Council to “make a recommendation on a global MBM scheme that addresses key design elements … and the mechanisms for the implementation of the scheme from 2020.” There has been little action to reduce the aviation sector’s growing greenhouse gas emissions since ICAO was assigned the task under the Kyoto Protocol in 1997. This additional delay is likely to be seen as another victory for the airline industry.    Click here to view full story…