George Monbiot, writing on the damaging modern phenomenon of accelerating consumerism says that advertising and consumerism dull our capacity for empathy. The Greendex survey in 2012, indicates countries with the highest consumption levels often have some of the lowest levels of guilt about environmental harm done. That includes the UK.  Monbiot says the government’s programme for economic recovery depends on unceasing consumption: that if people start repairing things or doing without, the scheme collapses. “Christmas permits the global bullshit industry to recruit the values with which so many of us would like the festival to be invested – love, warmth, a community of spirit – to the sole end of selling things that no one needs or even wants.”  “Are we so bored, so affectless, that we need to receive this junk to ignite one last spark of hedonic satisfaction? Have people become so immune to fellow feeling that they are prepared to spend £46 on a jar for dog treats or £6.50 a bang on personalised crackers ….” Air travel is one particularly high carbon type of consumption; buying a trip by plane is just another product, albeit a particularly environmentally damaging one.
.
Tweet

Advertising and consumerism dull our capacity for empathy.

Published in the Guardian 26th November 2013.

Guilt is good. It’s the feature that distinguishes the rest of the population from psychopaths. It’s the sensation you are able to feel when you possess a capacity for empathy.

But guilt inhibits consumption. So a global industry has developed to smother it with a 13-tog duvet of celebrities and cartoon characters and elevator music. It seeks to persuade us not to see and not to feel. It seems to work.

The 2012 Greendex survey found that people in poorer countries feel, on average, much guiltier about their impacts on the natural world than people in rich countries(1). The places in which people feel least guilt are, in this order, Germany, the US, Australia and Britain, while the people of India, China, Mexico and Brazil have the greatest concerns. Our guilt, the survey reported, exists in inverse proportion to the amount of damage our consumption does. This is the opposite of what a thousand editorials in the corporate press tell us: that people cannot afford to care until they become rich. The evidence suggests we cease to care only when we become rich. 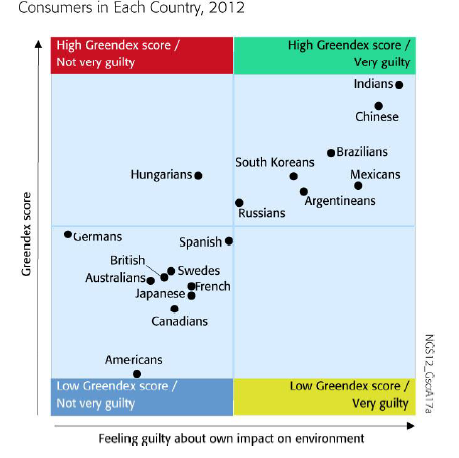 Graph taken from the 2012 Greendex report

“Consumers in countries such as Mexico, Brazil, China and India,” the survey tells us, “tend to be most concerned about issues like climate change, air and water pollution, species loss, and shortages of fresh water … In contrast, the economy and the cost of energy and fuel elicit the most concern among American, French and British consumers.”(2) The more you have, the more important money becomes. My guess is that in poorer countries empathy has not been so dulled by decades of mindless consumption.

Watch the latest advertisement for Toys ‘R Us in the US(3). A man dressed up as a ranger herds children onto a green bus belonging to “the Meet the Trees Foundation”. “Today we’re taking the kids on the best field trip they could wish for,” he confides to us. “And they don’t even know it.”

Nature is tedious, plastic is thrilling. The inner-city children I took to the woods a few weeks ago would tell a different story(4), but hammer home the message often enough and it becomes true.

Christmas permits the global bullshit industry to recruit the values with which so many of us would like the festival to be invested – love, warmth, a community of spirit – to the sole end of selling things that no one needs or even wants. Sadly, like all newspapers, the Guardian participates in this orgy. Saturday’s magazine contained what looks like a shopping list for the last days of the Roman empire(5). There’s a smart cuckoo clock, for those whose dumb ones aren’t up to the mark; a remotely-operated kettle; a soap dispenser at £55; a mahogany skateboard (disgracefully, the provenance of the wood is mentioned by neither the Guardian nor the retailer(6)); a “papardelle rolling pin”, whatever the hell that is; £25 chocolate baubles; a £16 box of, er, garden twine.

Are we so bored, so affectless, that we need to receive this junk to ignite one last spark of hedonic satisfaction? Have people become so immune to fellow feeling that they are prepared to spend £46 on a jar for dog treats or £6.50 a bang on personalised crackers, rather than give the money to a better cause?(7) Or is this the Western world’s potlatch, spending ridiculous sums on conspicuously useless gifts to enhance our social status? If so, we must have forgotten that those who are impressed by money are not worth impressing.

To service this peculiar form of mental illness, we must wear down the knap of the Earth, ream the surface of the planet with great holes, fleetingly handle the products of that destruction then dump the materials into another hole. A report by the Gaia Foundation reveals an explosive growth in the pace of mining: cobalt production up 165% in ten years, iron ore by 180%, a 50% increase in non-ferrous metals exploration between 2010 and 2011(8).

The products of this destruction are in everything: electronics, plastics, ceramics, paints, dyes, the packaging in which our fatuities arrive. As the richest deposits are mined out, ever more land must be attacked to maintain production. Even the most precious and destructive materials are junked when a new dopamine hit is required: the UK government reports that a tonne of gold embedded in electronics is landfilled in this country every year(9).

In August a most instructive row ignited within the Conservative Party. The environment minister Lord de Mauley urged people to repair their gadgets rather than junking them(10). This, he argued, was necessary to reduce the amount of landfill, in line with the European waste directive. The Telegraph reported that “the proposals risk alarming businesses that are struggling to increase demand for their products.”(11) The Tory MP Douglas Carswell demanded to know “since when do we need government to tell us what to do with broken toasters? … having ruined our prospects of economic growth, the Eurocrats now seem to be giving us advice on how to make do and mend. The sooner we leave the European Union the better.”(12)

He understood that the government’s programme for economic recovery depends on unceasing consumption: that if people start repairing things, the scheme collapses; that mahogany skateboards and wifi kettles are necessary responses to a saturated market; that the iron god of growth to which we must bow demands that we spend the living world into oblivion.

5. This feature isn’t online, but it covered 36 pages in the Saturday magazine.

8. Philippe Sibaud, 2012. Opening Pandora’s Box: The New Wave of Land Grabbing by the Extractive Industries and the Devastating Impact on Earth. The Gaia Foundation. http://www.gaiafoundation.org/opening-pandoras-box

“Greendex 2012: Consumer Choice and the Environment — A Worldwide Tracking Survey”
measures consumer behavior in areas relating to housing, transportation, food and consumer
goods. Greendex 2012 ranks average consumers in 17 countries according to the environmental impact of their consumption patterns and is the only survey of its kind.

First conducted in 2008, the Greendex survey was expanded in 2009, with the addition of
Argentina, South Korea and Sweden to Australia, Brazil, Canada, China, France, Germany, Great Britain, Hungary, India, Japan, Mexico, Russia, Spain and the United States. Seventeen-thousand consumers were polled online (1,000 in each country). The same 17 countries were included in the 2012 survey.

How high carbon is flying, compared to other forms of consumption?

But below are some comparisons from information available.

Taking data from the (excellent) book by Mike Berners-Lee “How Bad are Bananas?”:

from  Mike Berners-Lee “How Bad are Bananas?”