The European Parliament is expected to give its final say to the highly disputed issue of aviation’s inclusion in the ETS on 3rd April. The Chinese president is ending a trip to Europe, during which a 10 year deal was agreed between Airbus and China that planes could be assembled in China till 2025. This is seen as an argument for MEPs in favour of a stronger European stance on carbon emissions trading in the aviation sector. MPs against the European Parliament giving in to pressure from other countries to weaken its ETS said that the Airbus/China deal showed that the threats of a trade war if the EU did not give in were not as serious as had been made out. The deal, according to one MEP “will make my position even easier to defend ….we should not bend to economic blackmail” which is what the Chinese have been doing. Another said the EU should “… stick to our principles and stop this incessant wavering whenever the slightest signs of trouble appear, then we’d be much better positioned to achieve real progress on the international stage.”
.
Tweet

The unblocking of Airbus orders by China’s Xi Jinping in Paris last week is another argument for MEPs “in favour” of a stronger European stance on carbon emissions trading in the aviation sector.

As the Chinese president’s visit to the EU headquarters and capitals draws to an end, the European Parliament is expected to give its final say to the highly disputed issue of emissions trading scheme (ETS) in aviation on Thursday (3 April).

MEPs are set for another “tough battle” over the issue in plenary session this week.

In an unexpected move on 19 March, the EU Parliament’s environment committee (ENVI) rejected a deal it had negotiated for weeks with the Council exempting foreign airlines from the European emissions trading system. But MEPs said the trilogue talks had been an “abomination” and that the Parliament’s key requests had not been taken into account, such as the allocation of revenues generated by the scheme to global warming policies and the “airspace approach” proposed by the Commission which covers the chunk of the flight operated in European airspace even for long-haul journeys.

The carbon emissions trading system for aviation has been strongly opposed by third countries, with China freezing Airbus aircrafts orders in retaliation, a move that prompted the company’s CEO to pen a letter to the government in Beijing saying that he “fully supports” the Chinese position on EU ETS.

But president Xi Jinping unblocked the orders during a visit to his French counterpart, François Hollande, for 27 Airbus A330 aircraft worth more than $6 billion, Reuters reported.

“This shows that the threats were not as serious as some thought,” the vice-chair of the European Parliament’s environment committee MEP Gerben-Jan Gerbrandy, who is among the opponents of the deal reached with the Council told EurActiv.

Gerbrandy lobbied the members of his political group, the Liberals and Democrats, to reject the deal on 19 March and will continue to do so ahead of the plenary vote despite the opposition from German Liberals.

“This will make my position even easier to defend,” he said, “we should not bend to economic blackmail, which is what the Chinese are doing.”

The same concern over the lack of respect for Europe’s sovereignty was echoed by his Socialist and Democrat counterpart, Claus Larsen-Jensen: “The European Union shouldn’t allow itself to be threatened or black-mailed. If we stick to our principles and stop this incessant wavering whenever the slightest signs of trouble appear, then we’d be much better positioned to achieve real progress on the international stage and that, I think, is the best argument for standing our ground,” the MEP said in an e-mailed response, adding that the environment committee vote sent “a strong signal that this game of obstruction cannot continue”.

For green campaigners, the threats of a trade war with China over the ETS were an exaggeration too.

“The clamour surrounding a ‘looming trade war’ on the aviation ETS is nothing but hyperbole: yesterday China unblocked outstanding orders for Airbus planes (…) There are no more political or commercial excuses preventing an effective ETS to curb aviation emissions in EU airspace. We strongly urge the full Parliament to stand up for the environment and EU sovereignty and support the airspace proposal,” Aoife O’Leary from Transport and Environment (T&E) said in a press statement.

The vote in plenary promises to be just as tough, as the one in the environmental committe, with the airline industry and four member states – UK, France, Germany and Spain – set to lobby MEPs.

“It’s no secret that our actions in ENVI were extremely unpopular with the airline industry, with the airplane manufacturers and with a very large number of MEPs on other committees. But I’m confident that we ENVI MEPs will stand our ground and we’ll do our darndest to try and defend the “airspace approach” – which in itself, I might add, is a compromise. But we’re certainly headed for a quite a struggle,” Larsen-Jensen said.

The industry is concerned that a rebuke in plenary might lead to a return to the full-scope ETS, as initially proposed, meaning that all international flights would be covered and not just for the part over EU territory.

“The outcome is completely unclear,” Gerbrandy said, adding that he “wouldn’t mind” going back to full-scope ETS, even though there are other solutions, experts say, such as the Commission’s airspace proposal.

Right-wing groups, the European Peoples’ Party and the Conservatives and Reformists (ECR) are expected to vote in favour of the trilogue deal, while the Greens and the far-left will most probably go against it.

Therefore, the Liberals and Socialists’ vote will be decisive.

The groups will be meeting on Wednesday morning to take a position on the issue, sources in the S&D told EurActiv that the group would “probably adopt the ENVI committee position”, that is a rebuke of the deal. The Liberals and Democrats are more divided over the issue, as they were during the vote in committee, with German MEPs supporting the Council deal.

The NGO Transport and Environment said that “rejecting the trilogue deal does NOT mean the law automatically reverts to the original scope of the ETS or cause a trade war. That’s scaremongering. The Commission’s airspace proposal is the obvious compromise.  Failure to regulate in airspace shows weakness, invites more pushback and takes any pressure off ICAO.” 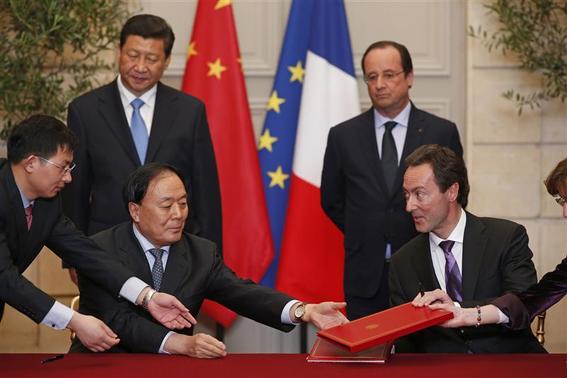 (Reuters) – China signed a new 10-year accord on Wednesday allowing Airbus to assemble A320 planes on its soil until 2025 and unblocked orders for larger jets worth more than $6 billion, restoring ties after a row with Europe over aircraft emissions.

The A330 orders that got the go-ahead on Wednesday had been suspended during a trade row triggered by China’s opposition to a European Union scheme forcing airlines to join an emissions mechanism that China feared could harm its carriers.

Airbus said China had agreed to buy a total of 70 aircraft including 43 A320-family airplanes and had gone ahead with previously frozen orders for 27 Airbus A330 aircraft – deals worth a combined $10.2 billion at catalogue prices.

But it failed to make headway in efforts to expand sales of its most popular wide-body aircraft by offering a new version of its A330, specially tailored for China’s domestic market. Airbus is prepared to open a second industrial plant for this project.

Airbus opened its first non-European aircraft assembly plant in the port city of Tianjin in 2009 and has been negotiating for months to extend the local production venture beyond 2016.

The factory and land have capacity to increase to 8 aircraft a month and could play a major role as Airbus, and its larger U.S. rival Boeing (BA.N), increase production to keep up with demand.

For the time being, production will remain at 4 a month, Airbus head Fabrice Bregier told Reuters.

China is the world’s fastest-growing aviation market despite a slowdown in its economy, with a surge in outbound travelers fuelling the expansion.

But deals announced during the French phase of Xi’s first presidential visit to Europe fell short of expectations that China would back the new regional model of Airbus A330 and sign a total of 150 jet orders worth as much as $20 billion.

“The extension of the Tianjin agreement secures production of 1,000 A320 aircraft over 10 years and these will be the subject of future orders,” Bregier told Reuters.

He reiterated there was a potential market for 200 of the new regional types of A330 offered for China’s domestic market. Industry sources say Airbus has been locked in a battle withBoeing for that slice of the busy domestic market.

Bregier said Airbus hoped to make progress within a year on discussions over a possible cabin completion centre for the A330 which is expected to be placed in Tianjin, alongside the existing A320 assembly plant.