LibDems have voted against an amendment, by Lorely Burt (Solihull) and Stephen Gilbert (St Austell and Newquay), to reverse Lib Dem policy of no new net runways. Party policy remains opposed to a new SE runway. The amendment proposed continuing opposition to Heathrow, but backing Gatwick expansion (Gatwick helped with conference expenses – and lobbied relentlessly). It was supported by Nick Clegg, Danny Alexander, Vince Cable, Ed Davey and Susan Kramer. However, no cabinet minister spoke in favour of it during the debate. Ed Davey and others made rather poorly informed comments about aviation becoming “cleaner and quieter” in future, meaning a new runway could be built without breaching environmental limits. “According to one party source, Clegg was also worried about going through an election campaign saying the Lib Dems would block a new runway, only for it to be agreed by parliament soon after the election.” LibDems will not back a new runway if in coalition after 2015. Julian Huppert played a central role in defeating the amendment.  Caroline Pidgeon spoke strongly against it, and tweeted that “softening on airports is bad for environment, for London and for the LibDems‘ credibility.” What this does to voters’ faith in LibDems not selling out to big business, at the expense of the environment, in future is not clear.
.
Tweet


There were several speeches denouncing the excessive lobbying at the conference by Gatwick. Like supplying free WiFi, below. 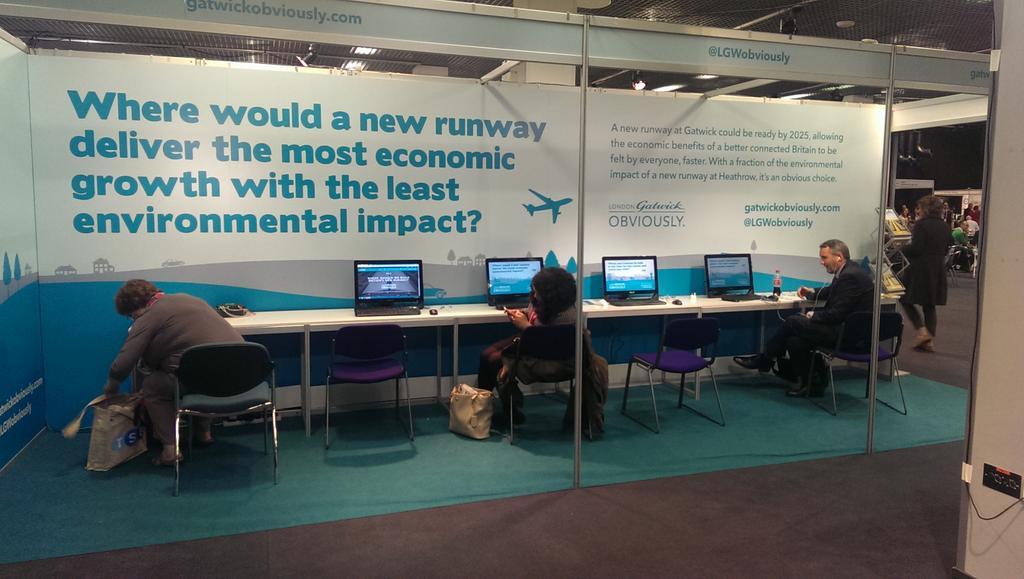 Or sponsoring the conference App: 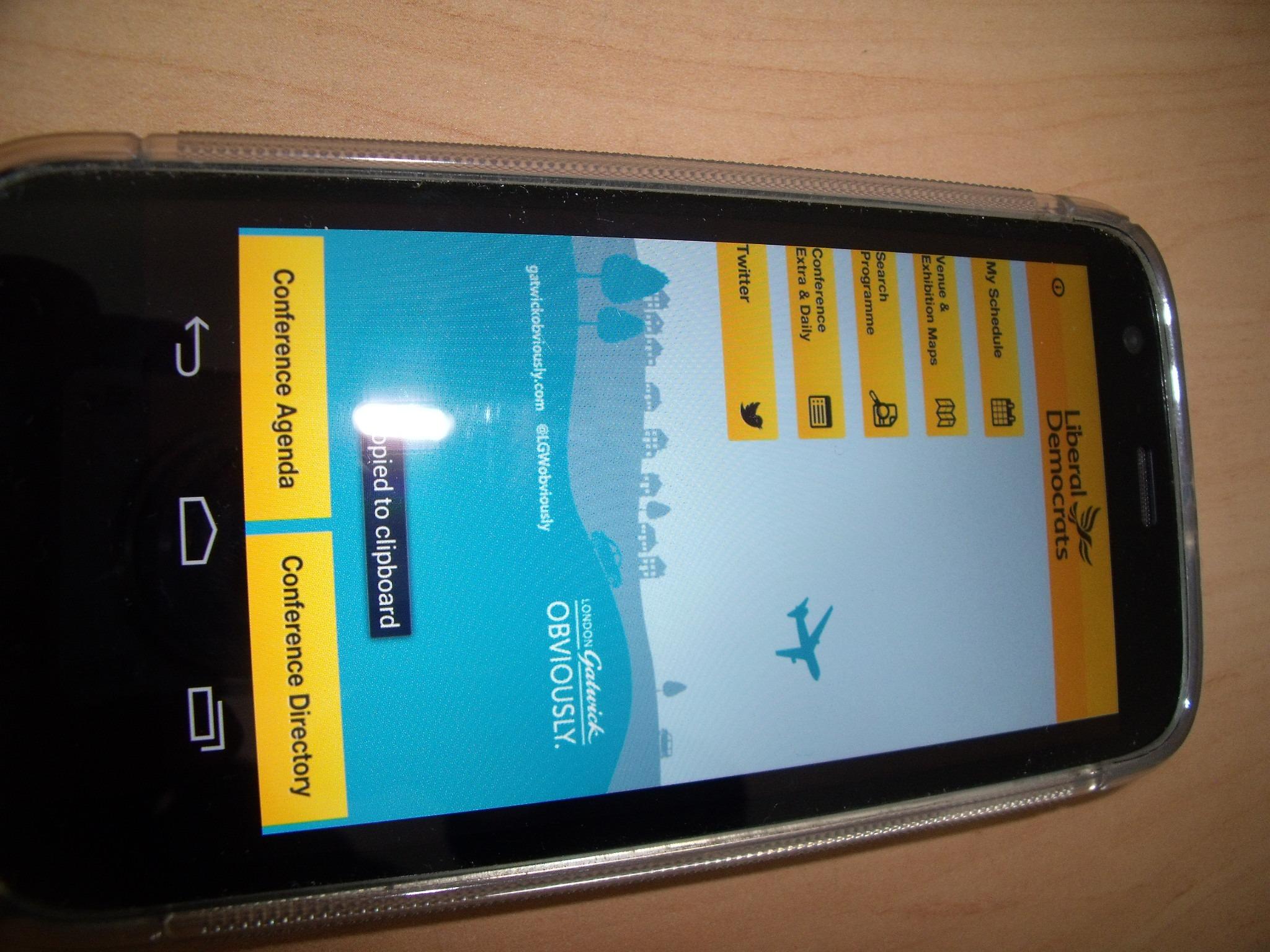 Rolling coverage of all the day’s developments at the Lib Dem conference in Glasgow, including the vote on whether the Lib Dems should drop their opposition to a new runway in the south east

Gatwick vote – Snap analysis: “How damaging …?” is the question the broadcasters always like to ask, and it’s fair to apply it to the Gatwick vote. I’ve described it as a defeat for Nick Clegg, because the leadership was supporting the Gatwick amendment, but some inverted commas may be in order (“defeat”) because Clegg had not exactly put his authority on the line over this. He proded the party towards voting for the amendment (which, as Duncan Brack explained, would have overturned existing policy), but he did no more than that. It was noticeable that no cabinet minister spoke up in favour of it in the debate, not even Ed Davey, the energy secretary, who defended the amendment on the airwaves this morning. (See 9.35am.)

Will this make a difference to where the new runway goes? Almost certainly no. The Davies commission is going to report after the election and it will recommend a new runway at either Heathrow or Gatwick. A Miliband-led government or a Cameron-led government would almost certainly back the Davies recommendation. Following today’s vote, the Lib Dems will have to vote against if they are in opposition and, if they are in coalition, they will probably have to negotiate an opt-out agreement allowing them to abstain or to vote against. But, as long as both main parties committed to airport expansion, the Davies plan will probably get implemented.

If one party changes its leader, that could change. For example, if Boris Johnson were to become Tory leader, he would resurrect the “Boris island” idea. He is very strongly opposed to expansion at Heathrow.

(Having attended the press conference for the launch of the Davies commission’s interim report, I got the impression it would plump for Gatwick, where the political opposition is lower, but the airline industry wants Heathrow and many experts think that’s what Davies will recommend.)

So why did Clegg want to drop the party’s opposition to expansion at Gatwick? Partly because he genuinely believes that technological advances could reduce the noise impact of a new runway significantly. (This is the argument Ed Davey was using this morning.) But not being opposed to Gatwick would also make future coalition talks easier.

And, according to one party source, Clegg was also worried about going through an election campaign saying the Lib Dems would block a new runway, only for it to be agreed by parliament soon after the election. There were fears that this could look like another tuition fees broken promise.

But, actually, the tuition fees comparison is not appropriate. The problem for the Lib Dems over tuition fees was not that tuition fees went up, but that the Lib Dems voted for an increase having promised not to. They won’t make the same mistake again over Heathrow or Gatwick. Now any prime minister wanting to approve a new runway after 2015 will definitely have to do so without Lib Dem votes.

The Gatwick amendment has been defeated.

That means Lib Dems are still opposed to any airport expansion.

It’s a defeat for Nick Clegg, who wanted the amendment passed.

This is what Clegg said on this last week.

I do happen to think the environmental impact can … be consistent with some form of airport expansion, given the rapid improvement in environmental performance of modern aircraft.

Duncan Brack, the vice chair of the Lib Dem federal policy committee (and a former special adviser to Chris Huhne), is summing up the debate now.

He says the federal policy committee is opposed to the Gatwick amendment. It contradicts existing party policy, he says. And there is still room for expansion in regional airports.

Suggesting that you can expand airports without increasing emissions is “simply not credible”, he says.

What new voters would the Lib Dems attract from this initiative, he asks. It would make the Lib Dems look like the Tories or Labour, he says.

(The Lib Dems are confusing as a party. On this issue, the leadership is at odds with the federal policy committee.)

Stephen Gilbert, the MP for St Austell and Newquay, is summing up now on behalf of the Gatwick amendment.

Planes are getting cleaner and quieter, he says. The Lib Dems will never support airport expansion if it threatens their commitment to tackling climate change, he says.

And Heathrow expansion will never be supported by the Lib Dems, he says.

But the party cannot lock the regions out of growth, he says.

Addressing Caroline Pidgeon (see 11.04am), he says “Boris island is as dead as George Osborne’s leadership aspirations.” He goes on: “It ain’t going to happen.”

(I’m not sure that’s a good analogy. Boris island may be dead, but I would not entirely write off Osborne as a future Tory leader.)

Back in the hall, the debate on the pre-manifesto motion is still going on, and, on the Gatwick amendment, it looks as if the leadership may find it hard to win.

Julian Huppert, the Cambridge MP, wants the leadership to lose.

To all at #ldconf – please come to auditorium to oppose amendment 4 on aviation at 12:20. It’s bad for regional growth & bad for environment

In the debate on the pre-manifesto, some delegates are strongly attacking the Gatwick amendment. The opponents of the amendment are more vocal than the supporters.

One of the best speeches came from Caroline Pidgeon, a Lib Dem member of the London assembly. She said that she had investigated this on behalf of the London assembly and that there was spare capacity at Gatwick, Stansted and Luton. Heathrow said that it needed an extra runway for more flights to Asia, but two thirds of their flights are short haul, she said. She said that London was the best-connected city in Europe. And the Gatwick amendment would put the “Boris island” estuary airport on the agenda.

She also said that having an extra runway at Gatwick would damage the regions.

“I understand some other regional airports may want to expand in the future for their local economy within tough envrionmental limits. But allowing Gatwick or Stansted to expand would put a stop to the very thing the movers of this amendment want – more regional growth. Money would go into the south east and expand Gatwick or Stansted.”

@CarolinePidgeon says softening on airports is bad for environment, for London and for @LibDems credibility #ldconf

Davey says Gatwick stance is not a U-turn

Ed Davey, the energy secretary, was doing broadcast interviews for the Lib Dems this morning. He was talking about £100m Green Deal story announced overnight (see 9.11am), but he also managed to scoop the conference season “no shit, Sherlock” award for the most glaring statement of the bleeding obvious.

I don’t think we’re going to see the repeat of the last election where you in the media had what you called ‘Cleggmania’ when everyone fell in love with Nick Clegg.

Actually, when he read his comment in context, it’s not quite as daft as it looks. Here’s a summary.

http://www.theguardian.com/politics/blog/live/2014/oct/07/lib-dem-conference-2014-delegates-vote-on-gatwick-runway-proposal-politics-live-blog
.
An AirportWatch member who attended the conference writes:
Julian Huppert MP (Cambridge) played a central role in defeating the amendment and thereby maintaining Lib Dem opposition to any new runways at either Gatwick or Stansted. Without his efforts, which galvanised the support of grassroots party members, the vote may well have been lost.
For those who are not aware, the intention of the amendment was to narrow down – and strengthen – Lib Dem opposition to a third runway at Heathrow but to open the door for extra runways at Gatwick and Stansted.
It was a very divisive amendment, strongly supported by the Lib Dem leadership, notably Nick Clegg, Danny Alexander, Vince Cable, Ed Davey and Susan Kramer.  It was tabled by Lorely Burt (Solihull) and Stephen Gilbert (Cornwall).  Gilbert spoke at a Gatwick-sponsored fringe meeting yesterday arguing for airport expansion.
.

The Liberal Democrats are heading for a possible U-turn over their opposition to airport expansion.

The party has been committed to a blanket ban on the construction of any new runways in south-east England.

But two Lib Dem MPs at the party’s conference in Glasgow have tabled an amendment that would allow Gatwick Airport to be exempted.

The party leadership backs that plan – putting them on a collision course with many party members who support the ban.

The issue will be debated on the conference floor on Tuesday.

The airport expansion amendment has been tabled by Solihull MP Lorely Burt and Stephen Gilbert, who represents St Austell and Newquay.

There is no guarantee that it will be adopted as party policy and it is likely to face fierce resistance, with high profile figures including former London mayoral candidate Lord Paddick expected to speak against it.

Business Secretary Vince Cable has said expansion at Gatwick was “a preferable alternative” and “less problematic” than expansion at Heathrow, which is near to his Twickenham constituency.

But Peter Chivall, of the Green Liberal Democrats group, urged the party leadership to “see sense”.

“We will be giving away thousands of votes in the South East and elsewhere if we approve amendments like this and showing, in effect, we’re just a patsy for big interests,” he told BBC News.

“We know that the only way you can restrict aviation and restrict the amount of greenhouse gases emitted by planes is to restrict the number of runways. And that’s the way we have to go.”

So far, former minister Jeremy Browne is the only senior figure in the party – apart from Mr Cable – to throw his weight behind an extra runway.

“For an internationalist party like the Liberal Democrats to consciously cut us off from the rest of the world would be a big mistake. So I’m with the runway option,” he told BBC Two’s Daily Politics.

Lib Dem Transport Minister Baroness Kramer said the government must be prepared to defy the recommendation of Sir Howard Davies’ Airports Commission, which is due to report after the general election.

“Any government that says ‘we will automatically do what Davies recommends’ is abdicating the responsibility they were elected to exercise,” she told a fringe meeting.