The CAA has released information about a category A (the most serious risk of collision) near miss incident, of an Airbus A320 (which can carry up to 180 people) approaching Heathrow, over London, coming close to an unidentified drone. The incident was on 22nd July 2014 at 1416 GMT. The A320 pilot reported seeing a helicopter-style drone as the jet was 700 feet off the ground. The CAA has not identified the airline. The drone is reported to have been within 20 feet of the plane’s wing. The drone had not appeared on air traffic control radar and disappeared after the encounter. In another incident, in May 2014 the pilot of an ATR 72 turbo-prop plane reported seeing a helicopter drone only 80 feet away as he approached Southend at a height of 1,500 feet.  Now BALPA has warned that the large number of drones operated by amateur enthusiasts now poses “a real risk” to commercial aircraft.  Sales of drones have increased rapidly, with UK sales of 1,000 – 2,000 every month.  Costing as little as £35 for a basic one, they will be popular as Christmas presents – more advanced drones costing £3,000 can carry a high definition camera. Buyers have no training, but they are meant to stay below 400ft and avoid areas close to airports. There is no way to enforce these requirements.


This is the CAA safety summary for drones and here for drone ettiquette, and CAA website

Heathrow plane in near miss with drone

An unidentified drone came close to hitting a plane as it landed at Heathrow, the Civil Aviation Authority (CAA) has confirmed.

An Airbus A320 pilot reported seeing a helicopter-style drone as the jet was 700 feet off the ground on its approach to the runway at 1416 GMT on 22 July.

The CAA has not identified the airline or how close the drone came to the plane, which can carry 180 people.

It gave the incident an “A” rating, meaning a “serious risk of collision”.

This is the highest incident rating the CAA can give.

Investigators were unable to identify the drone, which did not appear on air traffic control radar and disappeared after the encounter.

In May the pilot of an ATR 72 turbo-prop plane reported seeing a helicopter drone only 80 feet away as he approached Southend airport at a height of 1,500 feet.

The incidents have prompted a warning from the British Airline Pilots’ Association (Balpa) that the rapid increase in the number of drones operated by amateur enthusiasts now poses “a real risk” to commercial aircraft.

The association’s general secretary, Jim McAuslan said drones could cause a repeat of the “Hudson River experience”, when a plane was forced to land in water in New York in 2009 after birds were sucked into its engines.

“The risk of a 10 kilogram object hitting a plane is a real one that pilots are very concerned about” he said.

“A small drone could be a risky distraction for a pilot coming into land and cause serious damage if they hit one.”

Sales of drones have increased rapidly, with UK sales running at a rate of between 1,000 and 2,000 every month.

They are expected to be very popular as Christmas presents.

They cost as little as £35 for a smaller model – more advanced drones capable of carrying a high definition camera and travelling at 45 miles per hour cost almost £3,000.

Only a very small minority of people operating drones have attended training courses in how to fly them.

A spokesman for the CAA said it had to depend on people using their common sense when they operated drones.

He said the current level of risk should be “kept in perspective” but warned that breaking laws governing the use of drones could potentially threaten commercial aircraft. 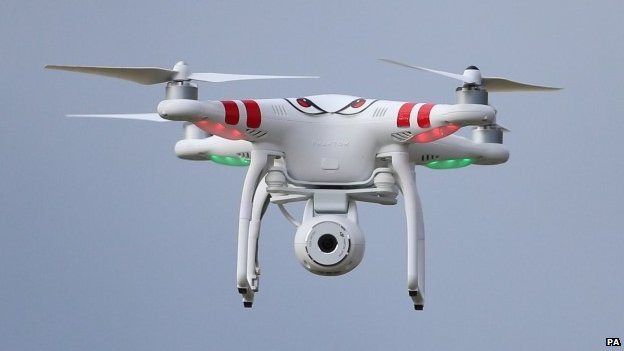 “People using unmanned aircraft need to think, use common sense and take responsibility for them”, he said.

“There are rules which have the force of law and have to be followed.”

Drones may not be flown higher than 400 feet or further than 500 metres from the operator, and they must not go within 50 metres of people, vehicles or buildings.

There are exclusion zones around airports and the approaches to them for drones weighing more than seven kilograms.

Mr McAuslan said there was an urgent need for rules to be tightened before much larger unmanned cargo planes – potentially the size of a Boeing 737 – took to the skies.

Report finds that remote-controlled model helicopter almost caused a mid-air collision, after flying into path of an Airbus A320 jet landing at Heathrow

A drone came within 20ft of striking a passenger aircraft shortly before it was due to land as Heathrow Airport, a report into the ‘near-miss’ has found.

The model helicopter passed dangerously close to the Airbus A320, 700ft above the ground on July 22 this year, according the report by the UK Airprox Board, the regulator.

It was the second recorded near-miss, or ‘airprox’, between a commercial passenger flight and a drone in Britain, and the first at Heathrow.

Officials concluded that the pilot of the remote-controlled aircraft, who has not been identified, “had chosen to fly it in an entirely inappropriate location.”

Crew on board the passenger flight had seen the drone, which flew 20ft over the A320’s wing, the report said. It was not picked up on radar, probably because of its small size.

It added: “That the dangers associated with flying such a model in close proximity to a Commercial Air Transport aircraft in the final stages of landing were not self-evident was a cause for considerable concern.”

Investigators contacted local model-flying club groups but were unable to identify the model helicopter involved, or its operator.

Members of the public are being reminded by the Civil Aviation Authority that it is illegal to fly drones, which are expected to be a popular Christmas present this year, in restricted airspace, including in flight paths.

The report said: “The Board were heartened to hear of work being undertaken by the CAA to bring the issue of remotely piloted aircraft operations to wider public attention.”
http://www.telegraph.co.uk/news/aviation/11289406/Drone-was-within-20ft-of-crashing-into-passenger-plane-landing-at-Heathrow.html

Drone in near miss scare at 700ft with Heathrow airliner: Fears that this year’s Christmas must-have gadgets could cause disaster in the skies

By LARISA BROWN, DEFENCE REPORTER FOR THE DAILY MAIL

A drone flying near Heathrow almost crashed into a passenger jet – raising fears that this year’s must-have Christmas gift could cause a disaster in the skies over Britain.

The remote-controlled device, flown by an unidentified amateur, was spotted by the airliner’s pilot but alarmingly was not detected by air traffic control radars.

The UK Airprox Board, the air safety panel that investigates near misses, gave the incident the highest risk rating of A, meaning there was a ‘serious risk of collision’.

Scroll down for video A drone flying near Heathrow almost crashed into a passenger jet raising fears that this year’s must-have Christmas gift could cause a disaster – the remote-controlled device was flown by an unidentified amateur.

It was the first near miss between a passenger jet and an unmanned aircraft at Britain’s biggest airport.

It comes after warnings over the dangers posed to passenger planes by recreational drones flown by amateurs.

They are expected to be a best-seller this Christmas, with models as cheap as £35 being snapped up.

Sales have risen rapidly – around 2,000 a month are being bought – and electronics retailer Maplin said they are currently one of its biggest sellers.

The most sophisticated designs cost up to £3,000.

They can include cameras and are usually used for recreational purposes – although increasingly they are being considered for commercial uses, such as carrying deliveries and monitoring farmers’ crops.

The Airprox Board will publish a report later this week into the Heathrow incident, which involved an Airbus A320 that can carry up to 180 passengers.

The jet was flying at an altitude of 700ft on the afternoon of July 22 this year when the pilot spotted the drone. He reported the near miss and an inquiry was launched by the board.

Worryingly, investigators were unable to identify the drone and it disappeared after the sighting.

It is the latest in a series of incidents involving unmanned planes.

In May, the pilot of a 74-seat plane reported that a quadcopter drone flew within 80ft as he was approaching Southend airport and in December 2012, the crew of a Boeing 777 coming in to land at Gatwick said they saw ‘two white or silver discs’. Drones (file picture) are priced from just £35 and sales have jumped thanks to extra pre-Christmas demand.

In April this year, the owner of a remote-controlled plane was ordered to pay £4,340 in fines and costs after his machine crashed in a no-fly zone near a shipyard in Cumbria for defence company BAE Systems, where nuclear submarines were being built.

The British Airline Pilots Association (Balpa) has demanded better protection for the public against the risk of drones.

There are currently few rules on operating drones. But Balpa wants them to meet the same safety standards as piloted aircraft, including only being flown by operators with pilot-equivalent training.

Balpa general secretary Jim McAuslan said: ‘The UK should become a “safe drone zone” so we can make the most of the major business and leisure opportunities offered by remotely piloted aircraft, while protecting passengers, pilots and residents.’

The device was spotted by the pilot but was not detected by air traffic control radars at Heathrow.

He added: ‘The technology is developing quickly and we could see remote aircraft the same size as a Boeing 737 being operated commercially in our skies within ten years.’

In October, intelligence experts warned of the misuse of drones and called for ‘urgent’ measures to safeguard British airspace to cope with commercial use, which is expected to be more widespread by 2035.

Their research for a University of Birmingham report said that the ‘hazards presented by inadvertent or accidental misuse of [drones], or the consequences of their malfunctioning, are becoming better understood’.

And a conference on unmanned craft in London last month heard that police were worried about injuries on Boxing Day when amateur ‘pilots’ try out their new drones.