Researchers in Argentina and Wales have written a new paper, showing the increasing extent to which man-made structures, and human activities, are having an impact on creatures that fly. The scientists say growing numbers of skyscrapers, wind turbines, power lines, planes and drones threaten billions of flying birds and animals, huge numbers of which are killed in collisions. The researchers say “airspace reserves” should be created to protect wildlife, by providing airspace zones where human activity is partially or totally restricted to reduce the aerial conflict.  These could be temporary zones, for example to help protect birds on their seasonal migrations, or permanent areas, put in place over key habitats. They need to be taken account of in planning for major construction projects. The authors say: “Most of the conservation in reserves and national parks is mainly focussed on the ground or more recently on water. None of them have focussed on the airspace.” Bird strikes with planes cause a risk to humans, so drastic measures are taken to remove birds from the vicinity of airports. The impact of drones is yet to be assessed, but could become a problem.
.
Tweet 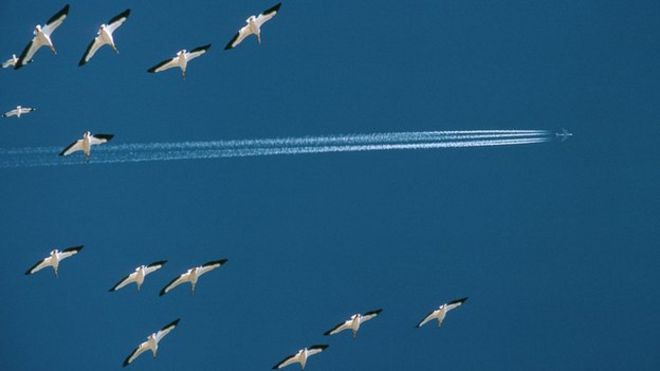 “Airspace reserves” should be created to protect wildlife, scientists say.

They warn that growing numbers of skyscrapers, wind turbines, power lines, planes and drones are threatening billions of flying animals.

Researchers in Argentina and Wales have called for airspace zones where human activity is partially or totally restricted to reduce the aerial conflict.

The report is published in the journal Science.

Sergio Lambertucci, from the University of Comahue and the Argentina Research Council (Conicet), said: “Most of the conservation in reserves and national parks is mainly focussed on the ground or more recently on water. None of them have focussed on the airspace.”

The skies are becoming increasingly crowded.

Scientists estimate that millions of animals die each year from collisions with tall buildings, power lines and wind turbines.

But the aerial conflict can cause problems for humans too.

The research team, also from Swansea University in Wales, says that bird strikes with planes have killed more than 200 people globally and have damaged thousands of planes.

The impact of drones is yet to be assessed, but the researchers fear they could be a growing problem.

The scientists say that areas of pristine airspace should be created.

These could be temporary zones, for example to help protect birds on their seasonal migrations, or more permanent areas, put in place over key habitats.

The scientists add that the impact on wildlife needs to be taken into account in the planning stages of major construction projects.

Dr Lambertucci said: “If you know all the species that use that area before you build an airport or a building or a wind farm, you will probably be able to reduce a lot of the conflicts.”

Human-wildlife conflicts in a crowded airspace

Over the past century, humans have increasingly used the airspace for purposes such as transportation, energy generation, and surveillance. Conflict with wildlife may arise from buildings, turbines, power lines, and antennae that project into space and from flying objects such as aircrafts, helicopters, and unmanned aerial vehicles (UAVs, or drones) (see the figure) (1–3). The resulting collision and disturbance risks profoundly affect species ecology and conservation (1, 4, 5). Yet, aerial interactions between humans and wildlife are often neglected when considering the ecological consequences of human activities.

The issue of bird strikes for planes is an emotive one. Some collisions do little damage to planes, but hitting a large bird can disable an engine, or worse. While birds and planes co-exist, some strikes are inevitable. Rose Bridger has been looking into this subject for years. She says shortly after the Hudson incident in 2009, New York’s 3 main airports began culling Canada geese. This escaped public attention until June 2010, when wildlife officials rounded up nearly 400 birds and gassed with CO2 in a nearby buiding. In fact, the geese that downed the plane were not locals, but migrants from northern Canada. By autumn 2013 geese were being rounded up from municipal properties within a 160 square kilometre area. After a non-fatal (for the plane) collision with a flock of geese at Schiphol in 2010, 5,000 were gassed in 2012. The area where geese are deemed a hazard to aircraft was extended to cover a 20 kilometre radius around the airport, and a further 10,000 geese were gassed between January and July 2013. In January, the New York Port Authority announced plans to eliminate the entire population of 2,200 wild mute swans. And there are many, many other examples. Airports should not be built in or near important bird habitats and migratory flightpaths.

A 10-year-old boy – Jack McCormick – has appealed to Belfast’s Lord Mayor to have geese, considered to be posing a threat to low-flying aircraft, moved to another park. The Lord Mayor has promised to raise the issues in a meeting with George Best Belfast City Airport. “I am an animal lover and would hate to think of anything bad happening to the grey geese at the park,” Jack wrote: “My papa takes me to a great park in Gilnahirk …. It is big, but it has no geese or any animals. Why not move some of your geese from Victoria Park to the park at Gilnahirk? I would make sure that they were well-looked after. If you can’t move them to Gilnahirk, could you not move them to other parks around Belfast?” The authorities prick the eggs so they don’t develop. Jack said (children aren’t stupid!): “Last year I noticed that there wasn’t that many goslings but this year I’m hoping there will be an increase,” he said. “I don’t want any of them to die just because of being near an airport. To be fair, the geese were there first, and then the airport was built there.”

The Daily Mail, it being the “silly season” with no news, had done an article on an alleged increase in the number air birdstrikes by aircraft between 2009 and 2012. However, the data published by the CAA up to March 2013 do not bear out the Mail’s claims of a doubling in three years. The CAA produces data on reported birdstrikes, and on confirmed strikes – the latter being a much lower number than the former. For instance, in 2012 there were 2215 reported birdstrikes, and 1404 confirmed strikes. Some of the increase in reporting may be due to changed reporting requirements of incidents to the CAA. The species hit most often in recent years have been various species of gulls (together the largest group), then swallows, skylarks, swifts and woodpigeons, then pigeons and kestrels. The number of birdstrikes rose significantly after 2008, when the CAA introduced a new system through which all strikes can easily be reported online. It has been mandatory for all strikes to be reported since 2004.

A form of grass – with the trade name Avanex – has been developed by a firm in New Zealand, Grasslanz Technology and commercialised by PGG Wrightson Turf. It has been designed to be endophytic, which means it incorporates a form of fungus that produces a high amount of alkaloids. This makes the grass distasteful to insects, and so the areas sown with this grass have no or few insects, and consequently few birds. The grass can be toxic to animals and comes with health warnings about livestock eating it. However, airports are enthusiastic to use the grass in order to deter birds and hence the risk of bird strike. The grass has so far been trialled in New Zealand airports since 2010 and found to cut bird numbers by large amounts, making airports very sterile areas, which is what the airport operators want. However, the blurb says “The grass could also be used at sports stadiums, golf courses and even domestic lawns,” so the company wants to use its biodiversity-destroying product even more widely.