“The Elephants in the Room” at the Paris talks: international aviation & shipping

Transport & Environment (T&E), a Brussels NGO, is calling on countries participating in COP21 to insist that the UN organisations responsible for international aviation and shipping set realistic reduction targets consistent with 2°C objective and adopt measures to implement them. The two sectors are the “Elephants in the Room” at Paris.  Though these two sectors are crucial to our global economy, they must grow in a way that does not come at the expense of the planet.  Aviation is responsible for almost 5% of all global warming and its emissions are predicted to grow by up to 300% in 2050. Such a growth rate would make the target of keeping the global temperature increase to under 2°C almost impossible to achieve. Further ambition is required, including cooperation between the UNFCCC and the ICAO. T&E have put together a briefing debunking the myths about the carbon emissions of aviation (and of shipping). Well worth reading. The industry claims that “aviation accounts for 2% of global emissions”; it claims “aviation is delivering increased efficiency gains”; that “thousands of flights already with alternative fuel, more expected”. It claims the industry “has a target of Carbon Neutral Growth from 2020”; and that it should not be a source of climate finance. Each in turn refuted by T&E. 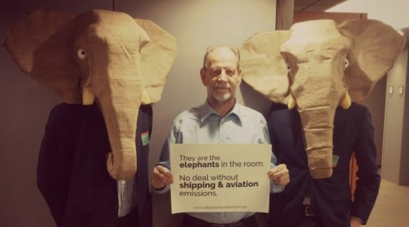 Would it make sense to try and keep your house cool with the heating on?

International aviation is responsible for 5% of man-made global warming and shipping for almost 3% of all Greenhouse gas emissions. And their emissions are expected to increase by up to 270% if no action is taken. Therefore, limiting a temperature increase to 2°C won’t be possible if the COP Agreement does not include emission reduction obligations from international aviation and shipping.

These sectors are crucial to our global economy, but they must grow in a way that does not come at the expense of the planet and the world’s most vulnerable states.
International Aviation Emissions – its Flight-path to 2 Degrees

Aviation is responsible for almost 5% of all global warming and its emissions are predicted to grow by up to 300% in 2050. Such a growth rate would make the target of keeping the global temperature increase to under 1.5/2°C almost impossible to achieve. Further ambition is required, and cooperation between the UNFCCC and the International Civil Organisation is essential to achieving this.

ICAO is nervous that the Paris Conference is being held at an airport lest aviation’s climate record be scrutinised.

The reality is that industry always plays down the climate impact from aviation. In reality it is responsible for 4.9% of man-induced global warming. (13)

The reality is that a 2015 report by the ICCT has found that aviation is 12 years off the efficiency target set by ICAO. The sector is still not bound by an efficiency standard, and the one currently being developed by ICAO risks having minimal or no impact on CO2 emissions from new aircraft. There is little transparency in this area. ICAO refuses to disclose the current state of fleet-wide efficiency gains. (14)

Industry claims that “industry has a target of CNG from 2020”.

The reality is that this target is a weak contribution to the shared global objective of limiting a temperature increase to 2 degrees. It is a start but industry will also argue it is the endpoint. With projected growth rates up of to 300% by 2050, aviation could account for up to 15% of all global emissions under a 2 degree scenario (15). The ICAO Assembly is due to agree the measure to achieve CNG from 2020 but the process is now marked by fundamental disagreements over legal and equity issues involving developing countries. Should an agreement be reached, it will rely entirely on offsetting – other sectors will be paid to make the emission reductions that aviation won’t.

The reality is that Industry has opposed any efforts to make this target operational, rejecting any obligation in the Paris Agreement to increase their ambition. Meanwhile ICAO has failed to follow its 2013 Assembly Resolution which called for work to begin on a post-2020 target.

Industry claims that “aviation should not be a source of climate finance”.

The reality is that airlines pay no tax on fuel used for international aviation, a subsidy which amounts to €60 billion per annum. International aviation is largely the preserve of the world’s wealthiest, while climate change will disproportionality affect the world’s poorest. Climate finance is a key element in achieving an ambitious climate agreement – aviation’s tax-free status must end and flyers start contributing (16).

Absolute reductions in aviation GHG emissions are possible and necessary to keep warming below 1.5/2 degrees. Paris must send a strong signal to ICAO and the aviation industry that ambitious targets and measures, not PR campaigns, are required.

References for the points above here.

The International Maritime Organisation (IMO) and the International Chamber of Shipping (ICS) have made a number of claims about their performance in tackling climate change that are contradicted by the facts.

They say that “world leaders might be tempted to consider specific measures aimed at reducing shipping’s overall contribution of CO2 emissions, such as an overall cap. Such measures would artificially limit the ability of shipping to meet the demand created by the world economy, or would unbalance the level playing field that the shipping industry needs for efficient operation, and therefore must be avoided.” (IMO Secretary-General Sekimizu, September 2015)
The reality is that the Parties included in Annex I shall pursue limitation or reduction of emissions of greenhouse gases not controlled by the Montreal Protocol from aviation and marine bunker fuels, working through the International Civil Aviation Organization and the International Maritime Organization, respectively. (Kyoto Protocl 2.2 1997)

His call is not just a danger to the planet, but as the research points out, also to the shipping industry’s future prosperity, and therefore the future stability of world trade.” (Marshall Islands Foreign Ministry, Oct 2015)
They say that the shipping industry is delivering carbon neutral growth. (1)

The reality is that since the implementation date for the IMO’s first regulations on energy efficiency is 2013, there can be no attribution of these measures to the observed trend. It is true, this change has occurred, and is because shipping GHG underwent a small absolute reduction, whilst the total emissions from other sectors increased. The absolute emission reduction is due to a reduction in shipping demand growth due to the Global Financial Crisis and fleet overcapacity resulting in energy-saving slow steaming.

They say that slow steaming and the CO2 savings it produces are hard wired into the fleet (4) and here to stay. (5)

The reality is that there is no economic development or regulation that has occurred since publication of the Third IMO GHG Study that has ‘hard wired’ slow steaming into shipping. Referring to the fact that a large explanation for shipping’s CO2 reduction is slow steaming, a phenomenon recognised to be a function of market conditions, the Third IMO GHG Study says “…All three [oil tankers, container ships and bulk carriers] contain latent emissions increases (suppressed by slow steaming and historically low cartivity and productivity) that could return… if the market dynamics that informed those trends revert to their previous levels…”.

They say that a cap on global ship emissions is a cap on world trade.(8)

The reality is that between 2007 and 2012 trade increased and emissions fell by 10% (9), and numerous studies have shown that further emission reductions are feasible (10).  The real threat to world shipping comes from delay. The world’s diminishing carbon budget means that a delay in reducing shipping emissions will require steeper emission reductions from this sector in later years, presenting a far bigger challenge to the industry which may in fact damage world trade.

They say that shipping is part of the solution to climate change.(11)

The reality is that if all other countries and sectors achieve decarbonisation pathways consistent with a 2 degree stabilisation, under current policy shipping will be responsible for up to ~17% of global CO2 emissions by 205012. Even further policy at IMO that constrains shipping to carbon-neutral growth would lead shipping to be ~6% of global CO2 emissions by 2050. Either scenario would make shipping an increasing part of the problem, and a risk for the achievement of climate stabilisation targets.

Absolute reductions in international shipping’s GHG emissions are possible and necessary to keep warming below 1.5/2 degrees, but to make this happen the Paris Agreement must send a strong signal to the IMO that targets and measures to achieve that end are required.

References for the points above here.

Comment by Matthias Groote, Member of the European Parliament, S&D (Socialists & Democrats) Spokesperson on climate and part of the EP delegation to COP21

“Without ambitious mitigation action in these areas, it will therefore be even more difficult to achieve the internationally agreed goal of keeping the average global temperature rise below 2°C.”

T&E is holding an event, on Thursday, December 3rd 2015 (10:30 to 12:00) . At the EU pavilion, room Brussels.   The event will bring together leading experts from industry, academia and civil society to discuss what is being and can be done, and what role UNFCCC and the COP Agreement must play towards the objective of reducing emissions from the sector.

Organised by Transport & Environment and the Centre for Biological Diversity

In response to the announcement that the carbon emissions international aviation and shipping are to be left off the draft Paris agreement, 17 European NGOs and environmental networks have written to the Arias Cañete (Commissioner for Climate Action and Energy in the European Commission) and EU-28 Climate Ministers. They say the omission of these two large sectors, with their combined huge carbon emissions, would – if sustained – greatly undermine efforts to limit a global temperature increase to 1.5/2 degrees. Aviation is responsible for 5% of global warming with shipping emitting 3% of global CO2, and their carbon emissions are set to grow by up to 250% by 2050. The group of 17 say they represent millions of concerned European citizens. They ask that the Commission ensures these two sectors are covered by the Paris Agreement, so that they make a fair contribution to the world’s shared objective of a sustainable, low-carbon future. The letter states: “What the world needs from Paris is an agreement which charts our path to a low-carbon future. What we must not get is an agreement which says ambition for some, exemptions for others. Paris cannot mean these sectors are fuel-tax and now emissions-target free.”