The CAA has just closed a 3 month consultation on their guidance to support their new airspace change decision-making process. The consultation is, frankly, impossible for most laypeople to understand or respond to. The AEF  has submitted their expert, 8 page, comments. They say, among other things:  “The consultation questions focus on the transparency and clarity of the guidance material, rather than on the substance of the proposals.” …but there are gaps left in the regulation of noise management: Some of these are: “… there is no apparent means of redress if people feel that the communication has been inadequate, or if they doubt the accuracy of the information provided.” … “the guidance …. is too complex for use by local communities, who need clear and simple guidance on how to engage with a local airport about noise, how to find out whether an airport has recently implemented airspace changes, and how to participate in the airspace change process if it is ongoing.” … “For as long as the CAA considers its primary duty to be about facilitating aviation growth, it will be unable to make impartial judgments about airspace change that balance the public interest with that of airports and airlines”. … And “The current process is seriously flawed in that it leaves no systematic opportunity for operational restrictions (such as limits on number of aircraft movements) to be imposed if the noise impact of a given airspace change becomes intolerable”.

By the Aviation Environment Federation (AEF)

In November 2015, following strong community opposition to a number of airspace change trials, the CAA published a report commissioned from the Helios consultancy recommending a complete overhaul of the process for airspace change. A new approach was needed, Helios said, to tackle fundamental problems in relation to the lack of transparency and poor community engagement.

Following a consultation in 2016 on its plans for implementing some of the Helios recommendations, the CAA has now drawn up a 294-page guidance document (plus environmental annex) setting out the proposed new process. Consultation on this document closes at midnight on Sunday 2nd July, and AEF has today submitted its response. Many of the proposals would implement the new policies which the Government recently consulted on.

The consultation questions focus on the transparency and clarity of the guidance material, rather than on the substance of the proposals. Nevertheless we make a number of general comments on the guidance overall and on the gaps left in the regulation of noise management:

We also comment on the detail of the proposed guidance, including calling for community consultation for airspace trials, more clarity over the weighting given to the results of cost benefit analysis as against community feedback, and penalties to be introduced if the ‘post implementation review’ finds that the environmental impacts of a change are significantly worse than those anticipated at the outset.

Our response can be read here.

Details of the CAA consultation

The purpose of this consultation is for the CAA to learn your views on new guidance that we have drafted to support our new airspace change decision-making process.

In March 2016 the CAA consulted on the principles of a new process that we were proposing. In October 2016 we published our report on that consultation and set out the new process we are now introducing (CAP 1465, available online).

The guidance that we have drafted defines what will happen in the new  process, including each stage a sponsor of an airspace change must complete; the stakeholders they must engage at each stage and our expectations of that engagement; and how the CAA assesses the proposed change.

We are inviting your views as to whether the guidance is appropriate – including your views on whether our description of the stages of the process are comprehensible, transparent and proportionate.

The AEF responses, by their Deputy Director, Cait Hewitt is 8 pages.  It is long and expert.  Below is one extract:

“Even if the CAA’s guidance was entirely transparent and accessible, and CAA staff fully and effectively engaged, there are a number of issues in terms of airspace and noise that will not be addressed without substantive change to the current regulatory arrangements. Of particular relevance is the fact that the CAA maintains that it has no role in regulating whether the number of aircraft using a given route should be limited for noise reasons, and that its role is only in determining where those routes should be. This situation presents a number of problems:

• The distinction between regulating for noise impacts arising from an airspace change versus regulating for noise impacts arising from increases in aviation activity starts to break down in cases where an airspace change facilitates growth. We strongly support the CAA’s proposals in its guidance for sponsors to present noise information relating to both the ‘base case’ and the ‘with option’ scenarios, and for this to address both current noise levels and projections for the future. But the base case scenario may well be associated with lower future noise projections simply because of capacity constraints than the ‘with option’ scenario.

• The guidance implies that in such situations, the CAA will tend – given its legal obligations – to prioritise the option that allows for an increase in aircraft numbers. This is consistent with the CAA’s duties beyond airspace, and reflects our impression that the CAA fundamentally sees its role as facilitating the growth of aviation. For as long as this is the case, it is impossible, in our view, for the CAA to be seen as an independent arbiter between communities and the industry when it comes to noise management, however rigorous the process is in terms of community engagement and transparency.

• Since local authorities can only impose operational restrictions in the context of planning applications, there is currently very limited opportunity for any authority or regulator to impose restrictions for noise-related reasons. We consider this a significant gap in the system. While we support the introduction of the concept of a Tier 3 airspace change and the provision of better information for communities about the noise-related impacts of such a change, the fact that neither the CAA nor any other body is able to judge these impacts to be unacceptable and to take action undermines the integrity of the current DfT-CAA approach to noise management. We are concerned, for example, that a flight path change could be approved on the basis of a particular forecast in terms of traffic movements being considered acceptable in terms of noise impact without any clear mechanism for the CAA to enforce such usage (in contrast to the way planning conditions on aircraft infrastructure operate), or to repeal approval of a flight path if, for example, usage is more intensive than originally anticipated.

Finally, it is impossible to foresee all aspects of how the process will work in practice. The guidance material, and the process more widely, should therefore be kept under review, with opportunities for all stakeholders to feed back on their experience of it.

and the full reply is at 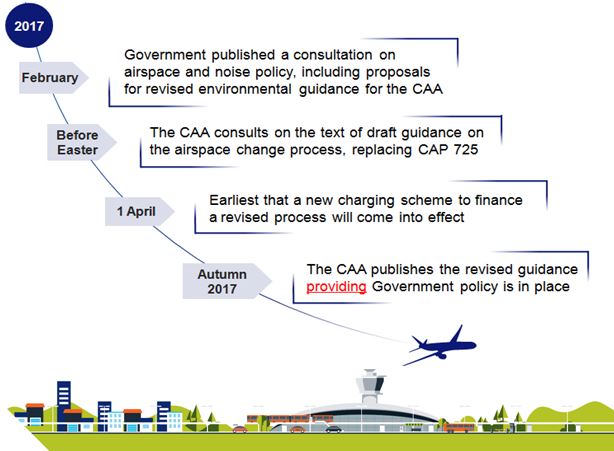