Many Northern Europeans have “flying shame” because of the climate: they stay on the ground while traveling. Rail travel is becoming increasingly popular. Some people in Sweden are cutting down on flying, and believe the carbon emissions are a matter of shame. The word for it is “flugsham” or “flygskam” and this is becoming a common concept, akin to ‘flying less” in English. A celebrity athlete is well know for only travelling to sporting events if he can get there by train. The Swedes are among the frequent flyers. They fly 7 times more than average global citizens.  While Sweden’s total CO2 emissions have fallen by 24% since 1990, air traffic grew by 61% in that time. A prominent writer in a popular newspaper  denounced the “idiotic lifestyle” of frequent flying as the “most expensive suicide in world history”. Researchers and artists responded: “Flying is no longer an alternative for them”.  People realise that we cannot go on with expanding aviation. A Facebook page on travelling by long-distance rail, rather than flying, had 30,000 followers in a few months. As well as the hashtag #flyingless there is the Swedish counterpart in #jagstannarpåmarken: “I’ll stay on the ground”.

Travel by rail – or not at all

Many Northern Europeans have “flying shame” because of the climate: they stay on the ground while traveling. Rail travel is becoming increasingly popular.

By plane or by train? Swedes prefer to stay on the ground.  Photo: imago / Karo

Seven World Cup victories, three World Championship medals and one Olympic gold were collected by Swedish biathlete Björn Ferry in his active sports career. For the upcoming winter sports season, the public television SVT has hired him as a commentator. Ferry had one condition for this: no air travel.

SVT had to accept that he will not only travel the 800 kilometres from his northern Swedish home to the studio in Stockholm, but also travel to the venues in Italy, Slovenia or Norway by train. There will be at least 13,000 kilometres by rail.  “If they had said no, I would not have done that,” says Ferry.

He is not afraid of flying. Ferry is all about the climate. For two years no one in the family flew.  His wife Heidi Andersson, eleven times armwrestling world champion, and he wants to live “fossil-free” by 2025 at the latest: “Flying is no longer possible. In any case, as long as there are no electric aircraft. “Instead of two hours take a trip from Lapland into the Alps then just two days:” But most can be done with night trains, and a few hours in Hamburg are no problem, because there are good Beer.”

The Swedes are among the frequent flyers. They fly seven times more than average earthlings. If the country’s total CO2 emissions have fallen by 24 percent since 1990, air traffic grew by 61 percent. But in the media in recent months piled up contributions such as the head of culture of the newspaper “Expressen”, who denounced the “idiotic lifestyle” of frequent fly as the “most expensive suicide in world history”. Researchers and artists responded: “Flying is no longer an alternative for them”. Orders that made air travel mandatory, you simply reject in the future.

Bahn notes the flying ash of the Swedes

The alarm messages that it can not go on with the aviation , apparently show slow effect. A Facebook group, in which tips are exchanged on long-distance railways, joined 30,000 people within a few months. Business people and doctors enthusiastically report their completely new experiences: Yes, but you can actually travel by train to London and Frankfurt or to meetings in Geneva. In May, Education Minister Alice Bah Kuhnke made official visits to Paris, Cannes and Berlin by train. From the Left Party to the Conservatives, politicians spoke up: as far as possible, they would refrain from flying.

“Flying shame”, so ashamed of your air travel, has a good chance to become Word of the Year

The hashtag #flyingless got its Swedish counterpart in # jagstannarpåmarken: “I’ll stay on the ground”. It has created a veritable movement, for which a new concept has become naturalized: “flygskam”, ashamed of his air travel. He has good chances to become Word of the Year 2018.

At SJ, the Swedish railway, you realize that. The occupancy of the inner-Swedish night trains has increased massively. Between Malmö and Stockholm in a year by 100 percent, between southern Sweden and Lapland by 25 to 60 percent. If SJ 2015 reduced night-train availability due to falling demand, there will be new connections and destinations starting in December. The funds for investments in the wagon park were increased. Interrail is also experiencing a renaissance: In Sweden, ticket sales have risen by 50 percent since 2017.

But does the “flygskam” [translates as flight shame]  individual really contribute to the climate? “I do not know that and that is not decisive for me,” says Björn Ferry: “Many find this idiotic. But maybe some people think: Damn what the ferry can do, I can do that too. “

For the first time in years, current figures show a turnaround in passenger numbers: from January to September, three percent fewer domestic flights and a slight decline in charter flights. If this continues, it will have consequences, says Jean-Marie Skoglund, aviation analyst at the State Transport Authority: “The airlines will reduce traffic. Some routes will be discontinued. “ 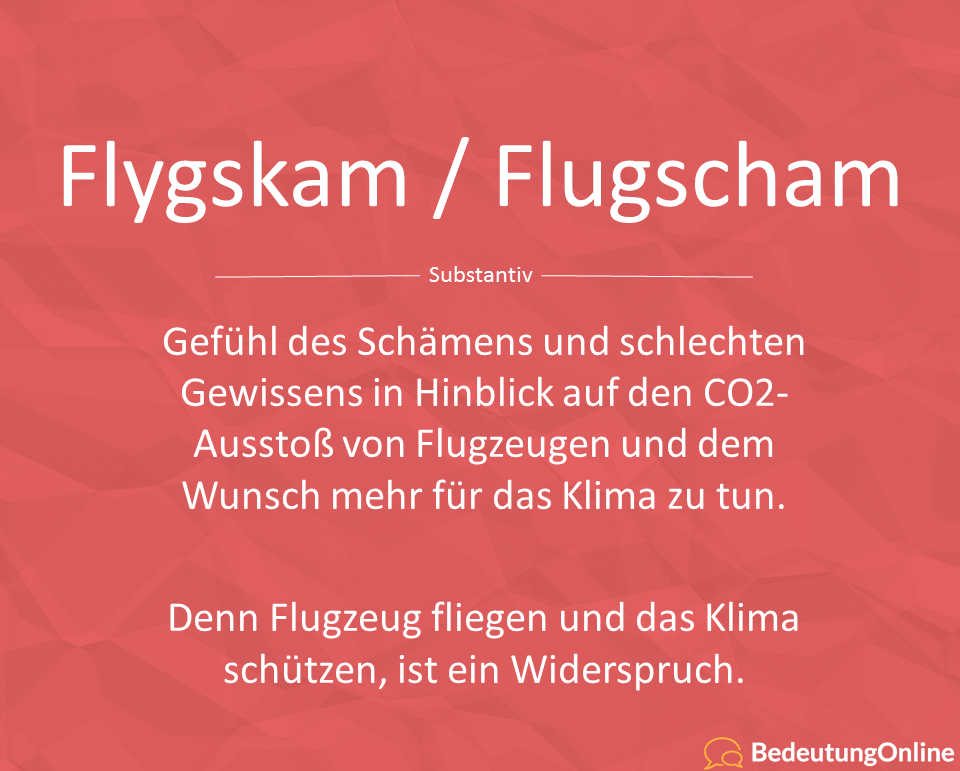 With Flygskam it is meant that some people are embarrassed and they have a guilty conscience when they fly by plane. This sense of shame and guilty conscience is what they have to do with regard to the CO2 emissions of aircraft and the desire to do more for the climate. Flying a lot and protecting the climate is a contradiction.

Flygskam became known in Sweden, according to which the Swedish athlete Björn Ferry has committed himself as moderator for the Swedish public broadcaster SVT under one condition: He does not travel to sports events by plane, but only by train. The transmitter allowed him to do so. As a consequence, he is now traveling through Europe, with some venues in Sweden, Norway, Italy and Slovenia.

According to statistics, Swedes fly on average seven times more often than other Europeans.

In a Facebook group with more than 30,000 members, the Flygskam followers exchange.

Flygskam is already showing its first successes: domestic air travel in Sweden is experiencing a slight decline of 3 percent for the period from January to September 2018. Demand for overnight trains between Malmö and Stockholm has increased.

“Flygskam” is a Swedish word meaning in German “Flugscham”. It is composed of the words “Flyg”, which means “flight” and “skam”, which means “shame” or “shame”.

The feeling of shame arises when someone develops an awareness that he has failed morally, exposed himself or injured his privacy. “Shame” is accompanied by feelings of embarrassment and feels uncomfortable.

In the social media under the hashtag #Flygskam contributions about the climatic harmfulness of the flying and contributions over alternative transport possibilities like train driving are spread.

Another common hashtag is # jagstannarpåmarken. “Jagstannarpåmarken” means “I’ll stay on the ground”. Reports on train travel on social media are distributed under this hashtag.

The Swedish Minister of Education Alice Bah Kuhnke is now traveling more train. So she went to Paris or Berlin by train.

German and English variants of the Swedish hashtag #Flygskam are: