The UN’s new, very weak, scheme to attempt to do something about global aviation CO2 emissions is starting soon. It is the “Carbon Offsetting and Reduction Scheme for International Aviation” (CORSIA). Countries have been trying to locate cheap, plentiful carbon credits that airlines can use. The process is secretive. One type of carbon credit being considered comes from the CDM, (Clean Development Mechanism) a carbon market established under the 1997 Kyoto Protocol to allow rich countries to meet their climate targets at a cheaper cost. This climate tool has generated a lot of controversy around its failure to reduce emissions, as well as negative impacts it has had on local communities and the environment. The problem is that there is a huge supply of “junk” CDM credits, far larger than the amount aviation would need. These junk credits are often from projects to cut CO2 emissions which would happen anyway. If these junk credits are the ones the aviation sector uses, the effect would be an increase in global CO2.  There is also the problem that while all credits are far too cheap to be effective, the junk ones are even cheaper – so not costing airlines enough to in any way be an incentive to limit their CO2 emissions.
.
Tweet

A new paper published in Nature Climate Change confirms that relying on outdated Clean Development Mechanism (CDM) carbon credits to compensate aviation emissions will do nothing for climate action.

In 2016, the International Civil Aviation Organization (ICAO) adopted the Carbon Offsetting and Reduction Scheme for International Aviation (CORSIA) as a first step to compensate a part of the aviation sector’s climate impact. Since then, countries have been negotiating the rules of this new carbon market, and are yet to identify which carbon credits can be used by airlines. One type of credit being considered comes from the CDM, a carbon market established under the 1997 Kyoto Protocol to allow rich countries to meet their climate targets at a cheaper cost. This climate tool has generated a lot of controversy around its failure to reduce emissions, as well as negative impacts it has had on local communities and the environment. Below are the three main takeaways from the new study.

Existing projects under the CDM could supply 4.6 billion carbon credits until 2020, while demand from CORSIA is estimated at 1.6-3.7 billion credits over the 2021-2035 period. This means that all of the demand from CORSIA could be met with emission reductions which occurred from projects started more than 8 years before CORSIA’s kick off. Moreover, 82% of the total supply of credits comes from projects which would continue to reduce emissions even in the absence of the CDM, or any other carbon market(1). This equates to 3.8 billion credits, more than enough to meet the entire demand of CORSIA. If these credits are used under CORSIA, they will lead to an increase in global carbon pollution. 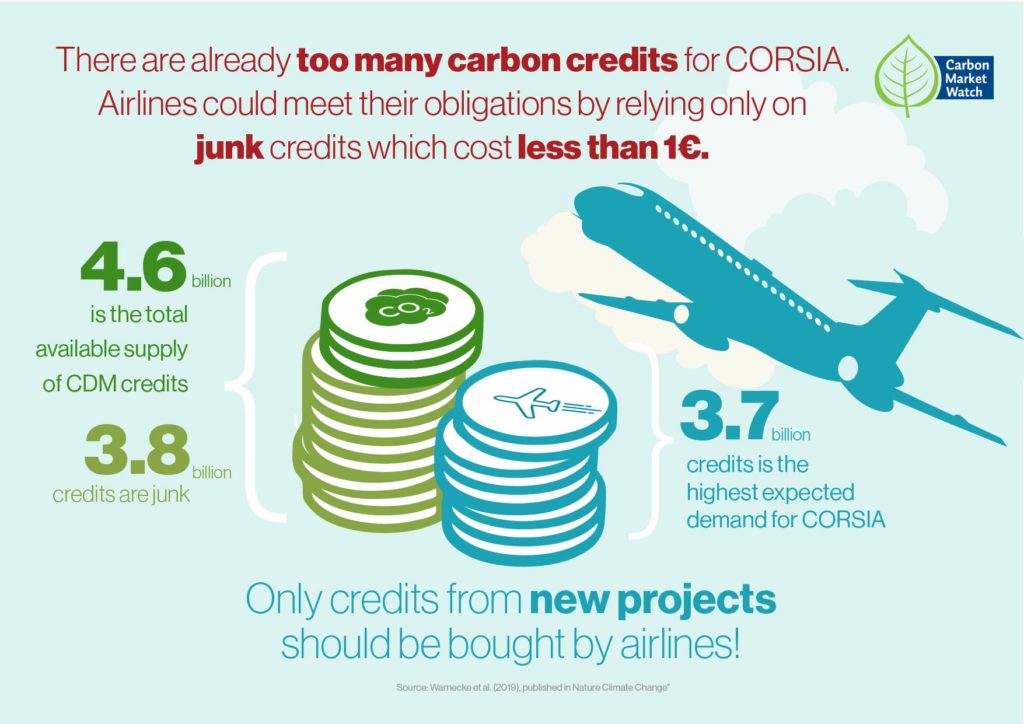 A further issue arising from this high availability of junk credits is that good projects are unlikely to receive any money from the CDM, unless further restrictions are adopted. This is because projects which are already economically viable without CDM revenues can afford to sell their credits at very low prices, since anything they sell will essentially come as a bonus to them. On the other hand, those projects which truly rely on CDM revenues need a certain amount of money to continue their operations, and will therefore not survive if credit prices drop below a certain level. This means that those projects issuing junk credits will set prices lower than those from good projects, and hence airlines looking to buy the cheapest credits will be attracted to buy the junk ones first. In the current situation, over 4 billion credits could be sold below 1€ per credit,which again is more than enough to cover the entire demand of CORSIA. This will do nothing to incentivize airlines to invest in low carbon alternatives, and continues a trend of exempting the aviation industry from having to pay for their pollution.

3) There is a simple solution to the problem: ban old credits

Most CDM projects are old. This means that the decision to invest in those projects was taken many years ago, sometimes a full decade. And over this period, a massive oversupply of credits has accumulated on the market. Restricting the use of credits only to those coming from new projects would significantly limit the risk of relying on junk credits, and support new climate action. For example, the study finds that setting a limit to rely only on projects which started after 2013 would cut the supply of credits to 120 million, because a very large majority of CDM projects were started before this date. This would not be enough to meet CORSIA’s demand, which would set an incentive to implement new projects, and hence would benefit the climate.

Carbon Market Watch’s take: Ultimately, in order to meet the objectives of the Paris Agreement, aviation cannot continue to rely on carbon credits from other sectors to compensate emissions. Air travel must be shifted to lower emitting modes of transport, such as rail, to the largest extent possible, and sustainable alternative fuels must be more heavily invested in, together with aircraft efficiency improvements. Pricing greenhouse gas emissions from the aviation sector in line with their climate impact would go a long way to help raise the funds for such investments. Robust credit quality criteria for CORSIA, including a vintage restriction of 2020based on project start date and measures to avoid double counting of emission reductions, are an important tool to start compensating the aviation’s growing emissions. But climate policy makers must not forget the bigger decarbonization imperative, and focus on ways to achieve in sector reductions as fast as possible.

1)This refers to whether a project is “vulnerable”. It is a different concept from additionality, which refers to whether a project would have happened anyway at the time it started. In the context of an already existing supply of projects and credits, what matters most for the environment is whether those projects need extra revenues from the CDM to continue reducing emissions, rather than whether they needed those revenues at the start.