The failure of global climate talks in Madrid last week to decide the fate of billions of old carbon credits raises the stakes for ICAO which must choose in March which offsets can be used for its carbon market for aviation carbon emissions.  ICAO plans to launch a scheme to offset its net growth in emissions, called CORSIA, from 2021 and will decide in March which offsets to use. This would have been easier if the Madrid talks had agreed what carbon markets should be accepted under the Paris climate agreement. Probably in January  ICAO’s Technical Advisory Board will make final recommendations to its governing Council on which offset programs to use. An option is the UN’s CDM, set up under the 1997 Kyoto Protocol which has issued more than 2 billion credits. These are very cheap – as little as €0.22. But the EU and smaller economies like Costa Rica are expected to push for limits on credits from those projects, which  would undermine the integrity of CORSIA. They would not work to curb CO2 emissions.  The EU says there has to be a higher level of ambition.   There is concern that ICAO will give in to the countries with the cheap credits, like Brazil, in order to keep them involved.
.
Tweet

The failure of global climate talks in Madrid last week to decide the fate of billions of old carbon credits raises the stakes for the U.N aviation body in Montreal, which must choose in March which offsets can be used for its carbon market.

The aviation industry accounts for over 2% of global greenhouse gas emissions, and if left unchecked emissions are expected to rise as passenger and flight numbers increase.

The sector plans to from 2021 launch a scheme to offset its net growth in emissions, called CORSIA. The International Civil Aviation Organization (ICAO) is set to decide in March which offsets to use.

This task made has been made harder by the failure in Madrid to agree what carbon markets should be accepted under the Paris climate agreement, experts said.

“We don’t have any political signal from the UNFCCC (UN Framework Convention on Climate Change) on the credits,” said Gilles Dufrasne, Policy Officer at NGO Carbon Market Watch.

“If there had been a decision it is likely the outcome would have been followed by ICAO,” he said.

As soon as next month, ICAO’s Technical Advisory Board will make final recommendations to its 36-member governing Council on which offset programs to use.

Among the options are the world’s largest offset scheme, the UN’s Clean Development Mechanism (CDM), set up under the 1997 Kyoto Protocol which has issued more than 2 billion credits.

Countries such as Brazil, India and China that have a large number of CDM credits, called CERs, are expected to push for allowing most or all of these – some more than a decade old – in CORSIA the way they did in the Madrid talks. 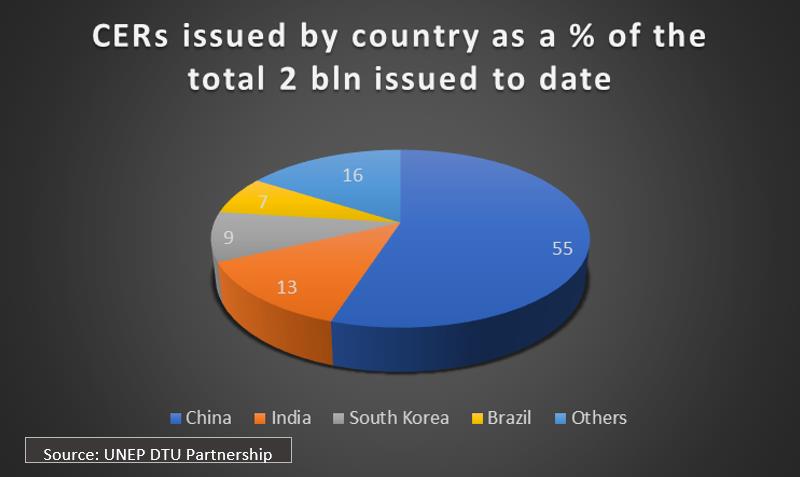 Certified Emission Reductions (CERs) are a type of emissions unit (or carbon credits) issued by the Clean Development Mechanism (CDM) Executive Board for emission reductions achieved by CDM projects and verified by a DOE (Designated Operational Entity) under the rules of the Kyoto Protocol.

“Having CORSIA around is good in that it might contribute to demand and therefore (increase) the price of carbon,” a Brazil-based source familiar with the matter told Reuters.

But the EU and smaller economies like Costa Rica are expected to push for limits on credits from those projects, which can cost as little as 0.22 euro, and which environmental groups say will flood the market and undermine the integrity of CORSIA.

Costa Rica, an ICAO council member, fought in Madrid against the use of Kyoto-era carbon credits under the Paris agreement.

A spokesman for the EU Commission said it is committed to implementing CORSIA but said it also “preserved its policy space to pursue a higher climate ambition in the EU.”

Andrew Murphy, aviation manager at NGO Transport & Environment said ICAO’s council, which does not require unanimous consent like the UN climate talks, may be inclined to make concessions to countries like Brazil.

“The big fear is they just take a political decision to try to keep as many countries as possible involved,” he said.

European Commission President Ursula von der Leyen has presented her European Green Deal, a comprehensive climate and nature package of measures to make Europe climate neutral by 2050. The package includes: a 50-55% emissions reduction target for 2030; a climate law to reach net zero emissions by 2050; a fund worth €100 billion to finance the transition; a carbon border tax; and a series of initiatives for sectors such as transport, agriculture, chemicals, buildings and more. NGO Transport & Environment (T&E) said the Deal, aiming to move to completely zero-emission cars and vans, is going in the right direction.  For airlines, Von der Leyen proposes to reduce free allowances in the European carbon market (the ETS) – increasing the cost of their pollution – and ending the kerosene tax exemption. The Commission also proposes to include shipping in the ETS, for the first time. T&E says it is reassuring that ICAO and IMO, the UN agencies that have been sabotaging climate progress in these two sectors for at least two decades, are only mentioned in passing.  But it is only a statement of intent, not something in law.

Evan Davis has done an edition of the BBC programme “The Bottom Line” on aviation and its claims about cutting its carbon emissions. His interview is revealing, in making clear how empty the industry’s claims of reducing its CO2 in future really are. Sector representatives admit it has broken its own pledges to grow carbon neutrally and lacks firm plans to achieve it by 2050. They talk about changing the sort of planes that fly, though ignoring that any new plane model that could fundamentally cut CO2 emissions per passenger is decades away, and all planes remain in service for perhaps 30 years. There is foolish over-optimism that electric planes might eventually transport enough passengers to make a difference – but it is decades away. All the current changes they are mentioning cut CO2 by far smaller amounts than the anticipated annual growth of the industry. As Evan says, “But this is sort of hot air…we’re used to from the aviation industry: ‘we’re all taking this very seriously, we’re signing up to these targets, by the way we missed it the last time we did it, but we’re ever more ambitions in the target we’re going to sign up to… there’s no plan.’ ”

The United Nations is aware that parts of the organisation are not convinced about carbon offsets, a strategy the UN and its ICAO has supported for two decades.  The UN has publicly struggled to reconcile its support for offsets with evidence that they are often ineffective. They encourage the misapprehension that people can continue to lead high carbon lifestyles, and get away with a clear conscience, as long as some effort is made to “offset” the carbon. Rules on global carbon offsets remain contentious and often debated at UN climate talks.  The organisation ProPublica published a study into how offsets related to forest preservation have not provided the promised carbon savings. They just permit “business as usual” and postpone the date when any real action might be taken. If trees are planted in poor, hot countries which are suffering unpredictable impacts of climate breakdown, they are likely not to survive. How can the intact forest provide income and livelihoods for local people, if trees are not cut down? Even if the trees do survive for decades, the carbon they have stored is later released back to the atmosphere. Perhaps in time of our grandchildren. Forests are not permanent removal of CO2 from the atmosphere.