A report commissioned by the climate charity Possible assessed every target set by the airline industry since 2000 and found that nearly all had been missed, revised or quietly ignored. This undermines a UK government plan to leave airlines to reduce their emissions through self-regulation. There are a range of targets that cover various measure of carbon efficiency. The levels of ambition underpinning the targets were generally insufficient, even if met, to reduce the absolute climate impact of aviation in the context of ongoing growth in demand.  Business behaviour does not appear to be driven by environmental targets. The target setting often appears to function principally as a tactic for giving an impression to the public and policymakers, of progress and action being taken to address aviation’s environmental impacts
in order to prevent any policy barriers to ongoing growth in the industry. The research found unclear definitions, opaque monitoring and inconsistent reporting made many targets difficult to assess, with many also suddenly changed, replaced or dropped. Even if met, they were insufficiently ambitious to reduce aviation’s climate impact.
.
Tweet

Our new report with Green Gumption reviews the climate targets which the international aviation industry set itself since the year 2000. Astonishingly, we found that all but one of their targets has either been missed, abandoned or just forgotten about.

So far, the aviation industry has been allowed to self regulate their own emissions. Unfortunately, their targets have suffered from a combination of unclear definitions, shifting goalposts, inconsistent reporting, a complete lack of public accountability and, in some cases, being quietly dropped altogether.

We also found that a number of airlines have fallen back on the shaky promises of carbon offsetting to address their climate impacts despite acknowledging the fact that offsetting can not adequately reduce emissions. There are many problems with offsetting schemes, including faulty calculations of the amount of carbon they absorb.

The UK government’s cleverly named Jet Zero strategy, which is due in July this year, is expected to go against the guidance from their advisors in the Climate Change Committee. The advisors have made clear that deliberate policies to manage growth in demand for air travel are needed to achieve the UK’s net zero goals.

Instead, the Jet Zero strategy will rely on the aviation sector to reduce their own emissions while growing the number of flights they provide.

Our analysis of the past 20 years shows that this industry is incapable of meeting their own climate targets. How can we expect this industry to deliver on their latest promises when they never met any of their previous targets!?

We are calling for a new way to manage aviation emissions. We need a progressive tax on flying in order to fairly reduce demand for flights, rather than relying on the industry to cut its emissions on a trajectory of perpetual growth in passenger numbers. A frequent flyer levy is a popular and fair alternative to manage demand by placing a higher tax on individuals who fly more often, such as the 15% of people who take 70% of all flights.

A frequent flyer levy would be one of the most equitable and easily implementable methods to reduce aviation demand and emissions. 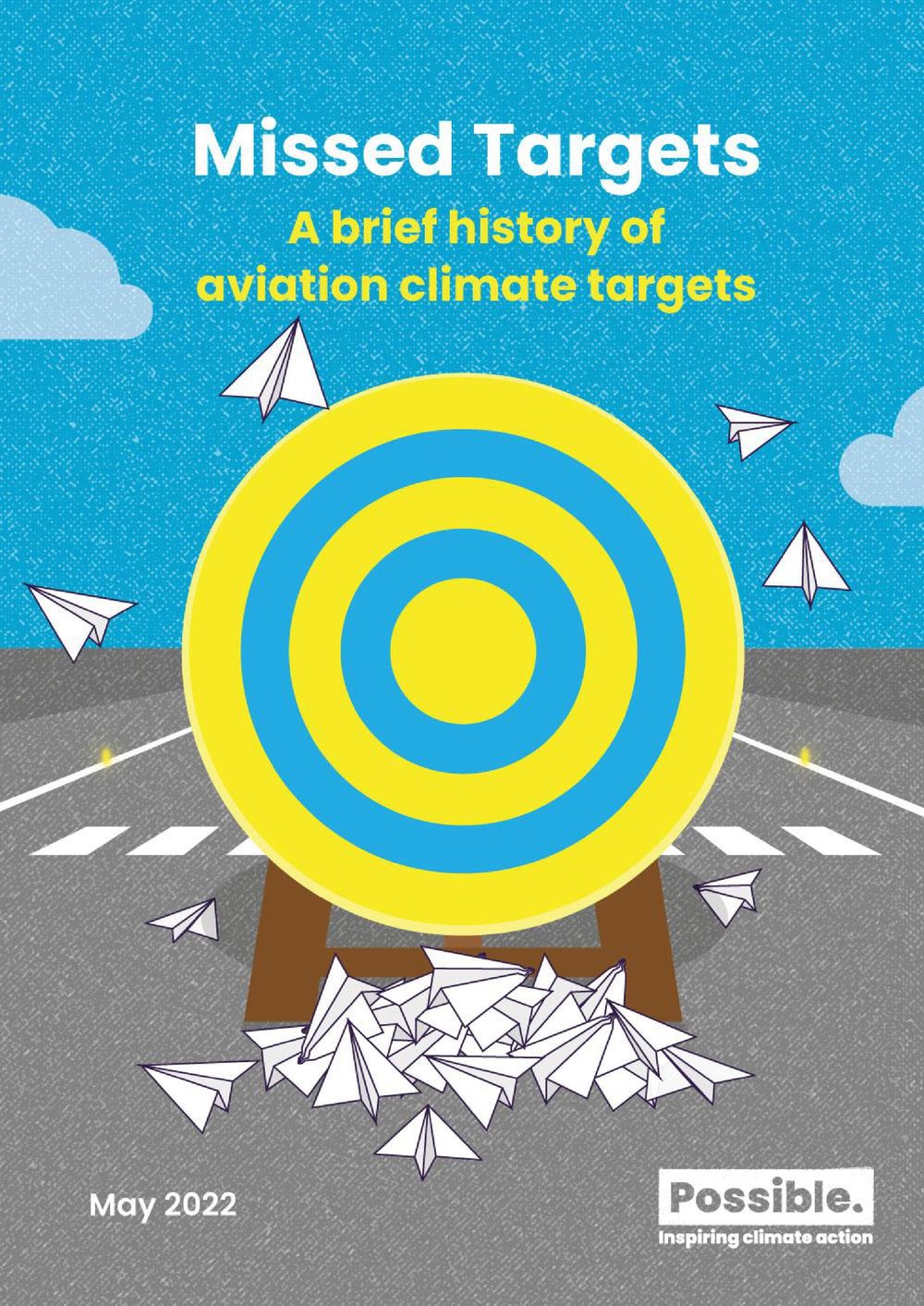 Charity’s report says nearly all targets set since 2000 have been missed, revised or quietly ignored

The international aviation industry has failed to meet all but one  [one small goal of a tiny drop in fuel use per passenger by EasyJet] of 50 of its own climate targets in the past two decades, environment campaigners say.

A report commissioned by the climate charity Possible assessed every target set by the industry since 2000 and found that nearly all had been missed, revised or quietly ignored. The charity says the findings undermine a UK government plan to leave airlines to reduce their emissions through self-regulation.

Leo Murray, Possible’s director of innovation, said: “This forensic investigation shows just how implausible and credulous the government’s jet-zero strategy is shaping up to be. How can we credibly expect this industry to overdeliver on emissions reduction when they’ve never met any of their previous climate targets?

“It’s clear that we need to demand reduction via a frequent flyer levy, which would discourage the frequent flying by a small group of people which makes up the bulk of emissions from planes.”

Air travel accounted for 2.1% of human-produced carbon dioxide emissions in 2019, equivalent to about 915m tonnes, according to the Air Transport Action Group. It is estimated that 15% of people take 70% of all flights, Possible says.

The air targets report was written by researchers from the sustainability agency Green Gumption, who examined climate targets starting and finishing between 2000 and 2021, and assessed progress against some longer-term goals.

They found that unclear definitions, opaque monitoring and inconsistent reporting made many targets difficult to assess, with many also suddenly changed, replaced or dropped within the study period. Moreover, even if the targets had been met, the researchers said, many were insufficiently ambitious to reduce aviation’s climate impact.

In 2007 Virgin Atlantic set a target of a 30% reduction in CO2 per revenue tonne kilometre (CO2/RTK) by 2020, which the company later described as “a big target and we’re sticking with it”, according to the report. In a 2014 sustainability report, with a reduction in CO2/RTK of only 8% from baseline, the airline admitted: “We’re nearly halfway through our target period and know we have to pick up the pace.”

But when Virgin’s 2020 annual report was published, it no longer mentioned the 2020 target. The following year, a press release from the company announced a new target of 15% gross reduction in CO2/RTK by 2026.

The researchers conclude that climate target setting is in effect a smokescreen for business as usual. Such targets “appear to function principally as a tactic for giving an impression of progress and action to address aviation’s environmental impacts to the public and policymakers, in order to prevent any policy barriers to ongoing growth in the industry”, the report says.

It includes a quote from Steve Ridgway, Virgin’s chief executive in 2007, who said: “It is important that the airline industry is being seen to do something.”

The government’s jet-zero strategy is due to be published in July and is expected to defy guidance from the climate change committee that deliberate policies will be needed to manage growth in demand for air travel in order to meet the UK’s net-zero goals.

A Department for Transport spokesperson said: “This report wilfully ignores this government’s historic investment in technology, fuel and market-based measures which will help us reach jet zero by 2050 without the need for further taxes. This includes £180m to accelerate sustainable aviation fuel and £685m to develop zero-carbon and low-emission aircraft technology.”

About us – We Are Possible

https://www.wearepossible.org
The 10:10 Foundation is a registered charity (number 1157363) working all over the UK.