Coalition sets out plans on runways and nuclear 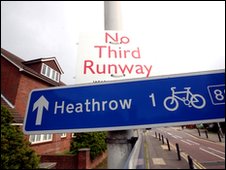 I am really concerned about the regionals. For example, one of the Boris bloggers
has already suggested that this now leaves Boris open to use London City Airport
to make up what they feel is a shortfall in flights.

The Lib dems said they opposed expansion at SE airports – but how will the regionals
be treated by the coalition? The regional expansions were seen by the Tories as
the way out of expanding Heathrow/Gatwick/Stansted and there was certainly no
commitment from the Tories on London City Airport,  let alone all regionals one
way or another. London City Airport appears to be the politicians favourite to
use and I think they’ll be a lot of press interest looking to the expansion of
LCY  and beyond.  The stampede to lobby them has already begun.

BIA is jumping for joy at the prospect of being  able to take over from Heathrow
– worrying times for those in the West Midlands – the new frontier: