In order to save money, by selling their Penzance heliport site to Sainsburys (which has planning consent), British International Helicopters had a planning application to create a new heliport at St Erth, some 8 miles north east of Penzance. This plan has now been dropped. The heliport would largely be used for flights to and from the Scilly Isles. There will inevitably be more noise for people locally, who strongly opposed the move. The helicopters will move to Newquay instead of St Erth.

A Cornish helicopter travel firm has dropped a plan for a new base at St Erth near Penzance. British International Helicopters (BIH), which flies to the Isles of Scilly, faced opposition from villagers worried about noise and pollution. It is moving out of its current Penzance base in June 2012 after selling it to Sainsbury’s.

BIH said villagers’ concerns “remain unresolved” and it would use Newquay Airport until another base was found. Opponents ‘very pleased’ BIH, which has operated the service since 1964, already has its aircraft maintenance and Navy support contracts based at the airport.

Managing director Tony Jones said St Erth was “the most suitable available site in Cornwall for a new heliport”. He added: “It is also very important to British International to be a good neighbour within the community”.

Airport managing director Al Titterington said: “We will work closely with BIH to ensure that the move to Newquay will be seamless and that their customers have as little inconvenience as possible”.

David Everett of West Cornwall Green Party said: “I am very pleased. British International Helicopters already has maintenance operations at Newquay Airport  “I have used the helicopters and I don’t see what was wrong with the Penzance which was good for road and rail connections.”

The Isles of Scilly are also served by a ferry from Penzance and planes from Land’s End, Newquay, Exeter, Southampton and Bristol.

In order to save money, by selling their Penzance heliport site to Sainsburys (which has planning consent), British International Helicopters have a planning application currently to create a new heliport at St Erth, some 8 miles north east of Penzance. The heliport would largely be used for helicopter flights to and from the Scilly Isles. There will inevitably be more noise suffered by people locally, and there will also be environmental damage. Tweet 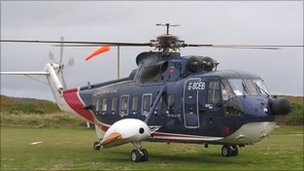 BIH has insisted it will take steps to reduce disruption

A plan by British International Helicopters (BIH) to move its heliport to a west
Cornwall village has been condemned at a public meeting.

Some 300 hundred villagers attended the meeting in St Erth near Penzance on Thursday
night, urging the company to drop its proposed move.

The residents claim a heliport in the village would cause noise and pollution.

The helicopter company insists it will take steps to reduce disruption.

Local people have long feared the heliport would destroy the peace of St Erth.

One of the villagers, John Damon, said at the meeting: “Helicopters are noisy
and create pollution and how anyone could apply for a proposal to put a heliport
in the middle of a residential area is bonkers to me, beyond comprehension.”

The helicopter company has said it will hold a test flight so local people can
see and hear for themselves the impact on St Erth. But no date has been set.

BIH has said it will meet people individually who live nearest the planned heliport
site in an attempt to set their minds at rest.

In October Cornwall Council approved plans to build a supermarket on the site
of the current BIH terminal in Penzance, west Cornwall.

BIH had previously said that in order to survive, it needed to sell the current
heliport and use the proceeds from the deal to buy new aircraft and bid for new
business.

Cornwall councillors will meet next month to consider the planning proposal for
the heliport at St Erth.

for much more about this story, see