Plymouth Airport closed today. No aircraft will be able to use the site from this evening. The site has been used for flying since the mid-1920s. The closure will see the site’s last eight staff lose their jobs. The last commercial flight by Air Southwest, the airport’s sole carrier, departed in July. The local MP has written to Theresa Villiers about possible state aid for regional air services, but such subsidy looks unlikely. A group of business people calling themselves “Viable” have crazily ambitious plans for the airport to be rebuilt and expanded for 1m passengers per year. 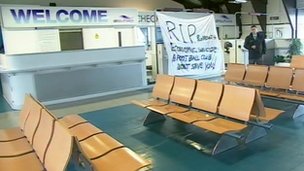 Protesters have made a last-minute appeal to keep a Devon airport open on the day it is due to close.

Between 50 and 60 people carrying banners were at Plymouth Airport on Friday morning.

The airport is to close on Friday night after its operator, the Sutton Harbour Group, said that routes from the airfield were no longer profitable.

No aircraft will be able to use the site from 22:30 GMT. The site has been used for flying since the mid-1920s.

The airport was officially opened in 1931 by the Prince of Wales, later King Edward VIII.

Members of Plymouth City Council, the landowner, voted in August to accept the airport’s closure.

Critics of the closure said the move would harm the local economy, affecting business links.

The closure will see the site’s last eight staff lose their jobs. 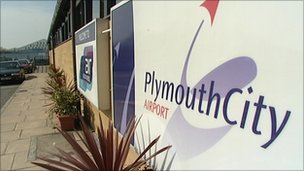 Local councillors have already accepted that the airport is due close

A Plymouth MP has written to the government in a “last-ditch attempt” to save the city’s airport.

Sutton Harbour Group, the airport’s operator, is due to close the airport in December, saying routes are no longer profitable.

Ms Seabeck said she was writing to the minister because Ms Villiers “very recently promised to look at state aid for regional air services”.

The Plymouth MP said: “If I can again demonstrate to the government, as I did before when meeting the Business Secretary, what the loss of our air link would mean for the city, perhaps there will be a desire to jump into swift action.

“I am not holding out any hopes but everything must be tried.

“It will be a great loss to Plymouth, especially to the business community.”

Councillors voted in August to accept the airport’s closure.

CAA data  show Terminal Passengers at Plymouth over the past 10 years:

It is about 45 miles from Exeter to Plymouth, taking about an hour to drive.  Map

Vision for a new £30million airport in Plymouth is unveiled

PLYMOUTH’S airport could become a £25-£30million “world class international gateway” under plans being worked on by a group of businesspeople campaigning to save it.

The Viable group has today unveiled a vision for the Derriford site which would see the runway extended, a new terminal built and land turned over for lucrative commercial use.

Viable will discuss the plans with Plymouth City Council next month, but has given The Herald a preview of how it sees the airport potentially developing.

The Sutton Harbour Group (SHG), which operates the airport on a 150-year-lease from Plymouth City Council, is shutting the facility today saying it is not economically sustainable.

But Viable, which opposed the closure, disagrees with the suggestion Plymouth can’t support a top-class aerodrome.

Basing its design on London City Airport, Viable envisages a facility that could eventually handle up to a million passengers a year.

The phased project would take up to 10 years to fully realise, initially seeing the reopening of the airport with restricted operation and limited services.

But the group said that after about three years the operation could be expanded dramatically.

Its vision is for the runway to be extended from 1,160 metres to its maximum 1,390 metres, so larger aircraft can be welcomed. A runway “loop” would mean aircraft can wait for take-off slots diminishing delays. But ahead of this, a simple initial resurfacing of the runway would only cost £500,000, Viable said, a quarter of the expected cost.

A new, larger terminal could be built, at right angles to the current terminal, which would be demolished.

That, along with using the current car park, would free space to create a commercial hub, which could be turned into a mixed-use scheme containing elements such as a conference centre, shops, offices, a hotel and possibly even a cinema, with short-stay car parking, and bring in about £7million.

A new building could be constructed at the upper end of the site, which would house private aircraft and the Royal Navy’s Flag Officer Sea Training (FOST) team.

This building, if constructed first, could be used as the terminal while the main building is under development.

It is envisioned that if the airport goes through such expansion it could accommodate increasingly larger aircraft, starting at 20-seaters, and 100,000 annual passengers, in the first three years, moving to 50-seaters and 115-seaters.

That would mean Plymouth could link to more than 30 international airports, including Paris and Amsterdam, which would give it a worldwide reach.

Viable chairman Raoul Witherall said the cost of expanding the airport proposals would be about £25million to £30million.

He said: “It will give us a world class international gateway and an airport for the next 100 years. This will connect us to the world and put Plymouth back on the map. Not only could this be done, but it should be done.

“We are seeing Plymouth City Council in the new year, explaining how this works.”

Mr Witherall said that compared to the colossal cost of building motorways, an airport investment would be “cheap for the long-term value it gives Plymouth”.

It would also support Plymouth’s economic objectives and become “a symbol of the city’s pride and ambitions”.

In August, the council’s Cabinet backed SHG’s plans to shut the airport on December 23, after SHG had produced two consultants’ reports which said no one wanted to run the airport or flights, and not enough businesses used the airstrip to make it economically viable.

Mr Witherall said that in addition to presenting its vision for the site, Viable would still continue to work to protect the airport, opposing any planning applications and probing into what happened to millions of pounds received by SHG following the 2007 sale of airport land for housing.

Meanwhile, Moor View’s Labour MP Alison Seabeck has written to Minister of State for Transport Theresa Villiers, who recently promised to look at state aid for regional air services, in a last ditch attempt to get Government funding to save the airport.

“I am extremely disappointed no solution could be found to save the airport,” said Ms Seabeck. “It will be a great loss to Plymouth, especially the business community.”

Campaigners have asked Plymouth City Council for a 28-day public consultation period on the closure of the city’s airport.

Viable wants to allow time for more legal and commercial evidence to be brought forward.

Sutton Harbour Group, the airport’s operator, intends to close the airport in December, saying routes are no longer profitable.

The city council said Viable’s request was with its lawyers.

Councillors voted in August to accept the airport’s closure.

Raoul Witherell, chairman of Viable, said: “We think there is more commercial and legal evidence to be looked at about the airport’s closure.

“We have asked for a 20-day consultation period to bring forward the whole picture.”

Viable said Plymouth’s economy relied on having an airport.

Mr Witherall, head of Plymouth-based Interactive Media Sales, said: “If the airport shuts on 23 December as planned we will certainly be able to come in and set the airport up again and we hope to run air services from summer 2012.

“The problem is if the airport infrastructure is dismantled in the interim period.

“That would be a way of spoiling that whole process so we want to make sure that doesn’t happen.”

The council said in a statement: “The council followed a very clear and robust process when assessing Sutton Harbour Holdings’ claim that the airport was unviable and this included a process of due diligence by independent auditors and the commissioning of an independent study into the options for the airport.

“It believes all procedures and processes were followed properly.

“The council has received notice of a potential judicial review and the matter is now with its lawyers.”