George Osborne’s airport hint has Thames estuary in a spin

For residents of Grain village the Chancellor’s statement that the government will consider plans for an estuary airport next year was confirmation of the threat to their homes. Osbourne is sold on the idea that infrastructure investment can boost the UK by providing economic links for business and unlocking cash from British pension funds. He also unveiled a memorandum of understanding with the National Association of Pension Funds and the Pension Protection Fund to invest up to £20bn in projects such a the four-runway airport.
Tweet

by Dan Milmo and Patrick Collinson 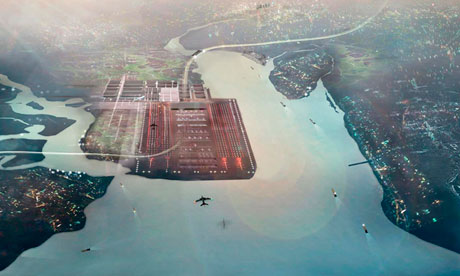 There is a geometric beauty to the view from Kent’s Isle of Grain, as alignments of mudflat, estuary and sky dominate a horizon that, in the wake of this week’s autumn statement, could soon be scarred by dozens of airliners in the cause of economic prosperity.

George Osborne dropped the clearest hint yet that the government is warming to the notion of an airport on the Thames estuary, possibly built on this peninsula, as he pledged to “explore all options for maintaining the UK’s aviation hub status”. For residents of Grain village, it was confirmation that kickstarting the British economy poses a threat to their homes. “It’s ridiculous,” says Jackie Jones, a housewife and Grain resident of 21 years, walking her two dogs on the shoreline. “The economy has gone downhill so much that something has to happen. But I am not sure that pouring billions of pounds into this is the way forward.”

The chancellor begs to differ. He is sold on the idea that infrastructure investment can boost the UK by providing economic links for business and unlocking cash from British pension funds. He also unveiled a memorandum of understanding with the National Association of Pension Funds and the Pension Protection Fund to invest up to £20bn in projects such as power stations and high-speed rail lines, as well as the four-runway airport that would be built right over a quiet village in north Kent. A national infrastructure plan published this week mentioned 500 projects. All they need now is the money.

The Thames airport, unthinkable even a year ago, is becoming ever more feasible. Boris Johnson has campaigned for a new London hub airport in the face of increasingly weak opposition from the Conservative party. Tuesday saw the government come close to conceding that London’s mayor has given them a get-out from opposing new runways at Heathrow, Gatwick and Stansted.

Johnson’s main lobbyist on a new airport is Daniel Moylan, deputy chairman of Transport for London, which runs the capital’s tubes and buses. He says: “I welcome the fact that the chancellor has said Britain must have a modern hub airport, and confirmed that there will be no expansion at Heathrow. This gives impetus to the search for a new location and the mayor is keen that it should be to the east of London. An urgent debate needs to take place.” Johnson has pushed his own idea of a floating airport – dubbed “Boris Island” – situated opposite Grain and off the Isle of Sheppey.

The renowned architect Lord Foster made an arresting contribution last month with proposals for a £50bn hub on Grain, in a project drawn up by his Foster & Partners, economics consultancy Volterra and planning specialist Halcrow. As well as an airport carrying 150 million passengers a year, it includes a new Thames flood barrier and a high-speed rail line that will connect to the High Speed One and High Speed Two routes. The plans are suitably futuristic but £50bn is a towering bill, dwarfing even the £32bn needed to build the HS2 route from London to Birmingham, Manchester and Leeds. For all the infrastructure headlines in the wake of Osborne’s statement, it was only a sketch of complex planning and funding needs.

There is, however, optimism about funding. Ben Hamer, an executive director at Halcrow, says initial discussions about the project have already taken place with sovereign wealth funds – the investment arms of rich states – and major banks. The issue for Halcrow is getting cross-party political backing. That, in turn, will help secure the seed funding to get the project up and running, followed by the multibillion-pound investment in constructing the site.

“If the government says it would love a Thames hub airport that would be a very strong market signal to investors that the risk of getting this through planning are going to be acceptable,” Hamer says, adding that there has been strong interest from Asia in the project. “They are looking for flagship projects.”

He also says that general interest from the financial sector appeared to be strong, and will be further bolstered by the chancellor’s announcement of a pension-fund-backed infrastructure programme. “We are having discussions with finance houses and we have invested a lot of our own time and energy on preparing the ground for funding.”

One scenario could involve the government taking the financial risk out of building the airport by paying a construction firm an agreed sum, plus costs, to put it together. Underwritten by the state, this would keep the cost of capital low. The asset would be handed over to the state on completion and sold to UK pension funds on a 30-year-lease – rather like High Speed One, the lease for which has been sold for £1.4bn to a Canadian grouping of the investment firm Borealis Infrastructure and the Ontario Teachers’ Pension Plan fund. The new airport owner would pay off its multibillion-pound investment by pocketing the revenues over the ensuing three decades.

The issue with this plan is the involvement of the government at the beginning. In the absence of public money – a fair assumption under current spending constraints – construction of a Thames hub would rely on loans raised from the banking sector. But with beleaguered banks determined to shrink their balance sheets – and warned this week by Bank of England governor Mervyn King to put aside even more capital – the proposal could remain stuck in the mud.

“We need to put to work the many billions of pounds that British people save in British pension funds, and get those savings invested in British projects. You could call it British savings for British jobs,” he said in the autumn statement, adding that the government was exploring guarantees and ways of letting city mayors borrow against future tax receipts in an echo of the vast municipally funded works that built Britain’s water, sewerage and road network in the Victorian era, as well as hospitals and schools.

Pension funds, which face the challenge of paying out fixed incomes to retirees when investment returns are at historic lows, like the concept of projects with reliable long-term income streams, such as toll roads and bridges. Airport landing fees and rentals from retail premises and parking could form an attractive income. Last week saw the creation of the Insurers’ Infrastructure Investment Forum, a joint initiative between the Association of British Insurers and the government, whose first task will be to create A-grade “infrastructure bonds” that will be attractive to pension funds.

But relying on pension funds for financing airport construction is still a remote prospect. Richard Abadie, infrastructure partner at PricewaterhouseCoopers, and a one-time Treasury official overseeing public-private partnerships, says: “You have to ask: why isn’t pension fund investment in infrastructure happening already? They don’t believe the returns are high enough, and they don’t want to take construction risk. It’s banks that traditionally take on project finance risk and only after that will pension funds and insurers invest in the long-term cash flow to match their liability profiles. But the banks are under huge pressure to reduce their balance sheets.” He cited RBS’s recent decision to sell £5bn of its project finance loans to Mitsubishi, and new ‘Basel III’ bank capital requirements that will further constrain lending.

An alternative is for Britain to create a state infrastructure bank to channel loans into major projects. It could be structured along the lines of the European Investment Bank or state banks that are behind huge construction projects in Brazil, India, Mexico and some US states.

Until then, Lord Foster’s island airport may remain on the drawing board. Decades ago, the original estuary airport project was opposite Grain, on the north bank of the Thames at Maplin Sands. It was conceived in the boom years of the early 1970s, and in 1973 an act paving the way for construction was passed in parliament. But the project was one of the earliest casualties of the 1973-4 oil crisis and subsequent recession. As a new credit crunch beckons, proponents of the scheme will be hoping that history does not repeat itself – although the residents of Grain will not agree.

Friends of the North Kent marshes, on  the bird and environment problems at http://northkentmarshes.com/?p=124