The government has ruled out building a new runway at Heathrow and there are restrictions on further expansion at Gatwick and Stansted.  Some business groups say that London will lose out to other European countries if more airport capacity is not built near the capital.  Justine Greening, appearing at the parliamentary select committee on transport, said she was looking at ways of making better use of existing capacity and it would be wrong to draw conclusions on future plans ahead of the publication of the government’s draft strategy on aviation expected in the Spring.
Tweet 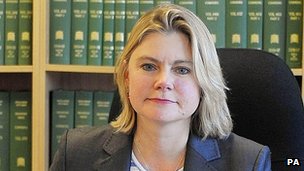 Transport Secretary Justine Greening has clashed with MPs about the idea of a new airport for London.

She was asked by the transport select committee whether she backed the plan for an airport in the Thames Estuary, dubbed “Boris Island” due to its backing by London Mayor Boris Johnson.

But she said MPs had not appeared to understand Mr Johnson’s stance and had “no details” behind their questions.

The chair of the committee told her that her remarks were “out of order”.

Ms Greening was giving evidence to the committee on the transport plans outlined in last month’s autumn statement.

But the hearing became heated when Louise Ellman, the Labour MP who chairs the committee, asked the transport secretary whether she was going to “explore the Boris Island idea”.

In response, Ms Greening asked the cross-party committee whether they had read any of the witness statements provided by Mr Johnson as part of a “call for evidence” on airport capacity in London.

“If anyone has, I would be interested if you could raise your hands,” she said.

But Mrs Ellman said this was not the way the committee conducted its hearings, telling her: “No, no, no, we are asking you the questions.”

Ms Greening went on to suggest that if the MPs “had actually read that evidence”, they would know that the London Mayor had not explicitly called for a new airport to be located in the Thames Estuary, east of the capital, but rather for a new “hub airport” in the south-east of England.

Mrs Ellman told the transport secretary that “it is not for you to suppose or assume or think anything” but to answer the committee’s questions about the issue raised.

And she added: “I think it is also incumbent on the committee to, in a sense, have some kind of details behind questions”.

But Mrs Ellman told her: “Secretary of State. That is not in order. This meeting, we ask you the questions. You may have whatever thoughts you wish but your role is to answer questions.”

“You are head of a very important department,” he said. “This is a major strategic issue and you simply flannelled and have not given any kind of direction or what your way of thinking is on this.”

The transport secretary rejected this and said ministers were “considering all the proposals that have been put to us”, adding “of course that includes proposals from people like the mayor”.

The government has ruled out building a new runway at Heathrow and there are restrictions on further expansion at Gatwick and Stansted.

Business groups have warned that London will lose out to other European countries if more airport capacity is not built near the capital.

“I do think it is incumbent on us to come up with a strategy which is well thought through… and will stand the test of time,” she said.

Earlier in the session, Ms Greening confirmed the government would back a further 21 transport upgrade schemes in England proposed by councils.

It will contribute £586m towards the £854m total cost of the road, rail and bus schemes over the next four years. The commitment, she told MPs, showed the government really understood the value of investing in transport infrastructure “as a driver of economic growth”.

The extra funding comes on top of that outlined for 20 schemes in last month’s autumn statement.

More news and information on a Thames Estuary airport at