RAF Northolt may be sold to raise defence funds

The MoD is considering selling off one of its oldest and most internationally renowned airfields, RAF Northolt in Hillingdon, as it seeks to raise money to help cope with swingeing budget cuts. All or parts of the site on the outskirts of north London could be sold for commercial development, and there have been high-level talks in Whitehall about whether the airfield could even become a satellite for Heathrow. This would enrage local residents but it has not been discounted by ministers, who are trying to reconcile the decision not to go ahead with a third runway at Heathrow with industry clamour for more capacity. DfT ministers are considering whether to include Northolt in the forthcoming aviation policy consultation.


Ministry of Defence considering selling off all or parts of one of its oldest airfields, which could become Heathrow satellite 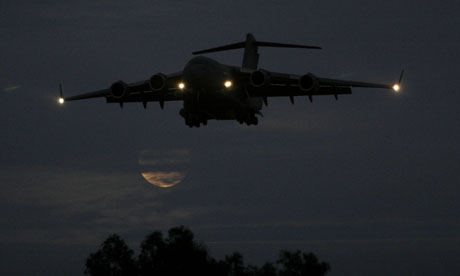 [Map showing location of Northolt Airport, just north of Heathrow, and showing how its runway is at a different angle to those at Heathrow]

The Ministry of Defence is considering selling off one of its oldest and most internationally renowned airfields, RAF Northolt, as it seeks to raise money to help cope with swingeing budget cuts, the Guardian has learned.

All or parts of the site on the outskirts of north London could be sold for commercial development, and there have been high-level talks in Whitehall about whether the airfield could even become a satellite for nearby Heathrow.

This would enrage local residents but it has not been discounted by ministers, who are trying to reconcile the decision not to go ahead with a third runway at Heathrow with industry clamour for more capacity.

The future of Northolt, which occupies hundreds of acres in Hillingdon, is under scrutiny as part of a review of the defence estate, which is looking at whether MoD land could be sold to raise revenue at a time of a budget squeeze and redundancies.

The base is still used by visiting VIPs and is the home of the 32 (Royal) Squadron, but it is 50 years since it was the UK’s busiest airfield, and dignitaries could be diverted to Heathrow four miles away.

This proximity has raised interest in Whitehall, and ministers are considering whether to include Northolt in a consultation about the future of UK air travel, which is due to be launched in March.

One industry source told the Guardian that the idea had been discussed in government. “It has its advocates because of its location close to the capital and to Heathrow, and there are some people who would welcome it,” the source said.

“But it shares some of the drawbacks of extending Heathrow, including the increase in noise for communities in west London.” Another source said: “In many ways it is less ridiculous than Boris Island.”

BAA, which owns six UK airports including Heathrow, said “all options should be put on the table” when the review starts. “We would not want to rule out anything until there has been a proper comparative study that looks at the pros and cons of each option,” a spokesman said.

A Department for Transport spokesperson said: “As the chancellor made clear in his autumn statement, we will explore all the options for maintaining the UK’s aviation hub status with the exception of a third runway at Heathrow. The government will consult on an overarching sustainable framework for UK aviation this spring.”

Northolt is one of the armed forces’ most celebrated bases, and its loss would be deeply felt within the military. It was established in 1915, three years before the RAF was formed, and during its 96-year history it has played many roles. It is the RAF’s oldest operational airfield.

In the second world war it was a home to British Hurricane and Spitfire squadrons that defended London during the Battle of Britain. When Heathrow was under construction, it was the briefly Europe’s busiest civilian airport. The Queen takes most of her flights from Northolt, and it is where Air Force One lands during visits by the US president.

It has been the site of many emotional homecomings, including the return of Diana, Princess of Wales, in August 1997. Her body was repatriated to the UK from France on board an aircraft of the Royal Squadron. In footage shown across the world, the Prince of Wales and the princess’s elder sisters, Lady Sarah McCorquodale and Lady Jane Fellowes, accompanied the coffin, which was draped in the royal standard.

In recent years the base has been placed under the spotlight by campaigners investigating the UK’s support of CIA rendition flights. Three years ago the former Guantánamo Bay prisoner Binyam Mohamed was flown back to Northolt after his release. RAF Typhoon fighters will be based at Northolt during this summer’s Olympics.

Air Commodore Andrew Lambert said the RAF had already lost bases of historic importance because of defence cuts, and questioned whether it was necessary to add Northolt to the list.

“It would be a great shame to lose RAF Northolt. I am sure that the site would make lots of money because it is just off the M25 and is a prime bit of real estate, and it is the nearest airport to London. But I’d want to know if the MoD has done its sums properly,” he said.

The MoD said no decisions had been taken. There are some in the military who will argue to retain an MoD “core” at Northolt, even if it becomes a commercial hub in the future.

A spokesman said: “We continue to scrutinise all defence expenditure to secure the best value for money. RAF Northolt is no exception. It already generates revenue through landing fees from private flights and sources of income generation are of course kept under review.”

An influential group of Conservative backbenchers has reopened the debate on whether extra runways should be built at London’s airports.

The Coalition scrapped proposals for a third runway at Heathrow when it came to power in 2010, and chancellor George Osborne has since reaffirmed that this option is ruled out in any consideration of airport capacity in the south east.

But the Free Enterprise Group of MPs argues that runways could be built were fair compensation paid to those affected, and that the potential size of this compensation would drive commercial decisions as to where expansions should occur.

In a paper The Case for Aviation, the group says Heathrow could either have a new runway, or the RAF base at nearby Northolt airport could be incorporated into Heathrow to provide more capacity.

“Hub airports depend on economies of scale. If London loses its position as Europe’s business hub, it will not be easy to regain. Britain will need at least one new runway within the next ten years.”

Admitting that one of the main objections to a new Heathrow runway is the destruction of the village of Sipson, Kwateng says: “One means of avoiding this would be to create a new runway by augmenting other already existing infrastructure, such as the runway at RAF Northolt.”

He says Northolt’s runway is 1,687m, only 513m shorter than that proposed for Heathrow’s third.

“Northolt is only around 10km north of Heathrow. Other airports such as Amsterdam Schiphol have already demonstrated that situating new runways several miles from the control tower is perfectly workable.”

Kwateng argues that governments have a poor record of making decision on infrastructure and instead proposes: “Decisions should be made by the price mechanism and free competition rather than special interests and political grandstanding.

“Each new development should have to directly negotiate adequate compensation for affected locals, rather than lobby through politics and the press.

“This would leave the industry free to respond to market demand, and able for itself to judge the relative costs and benefits of the different options. This does not, incidentally, necessarily imply more development everywhere. In the case of Heathrow, for example, adequate compensation with the residents could easily prove so expensive that relocating to another location such as Stansted or the estuary becomes more attractive.”

According to the paper, Heathrow is already slipping far behind international competitors in the number of flights it offers.

It says Paris and Frankfurt have 1,000 more flights a year to China’s three largest cities than does Heathrow, while 21 emerging market destinations are not served.

Wikipedia on Northolt airport at http://en.wikipedia.org/wiki/RAF_Northolt

The head of IAG has dismissed plans for a new super-airport covering Heathrow
and Gatwick as lacking credibility. The DfT has revealed that they are looking
at plans to create a linked hub, bringing Heathrow & Gatwick together. The
airport’s Whitehall code name is Heathwick.  Walsh says this would be difficult
to deliver and more expensive than a 3rd runway at Heathrow. As part of an aviation
review, the DfT is also considering joining Northolt with Heathrow.

which contains this paragraph:

As part of an aviation review, the Government is also looking at proposals to
join the RAF base at Northolt, west London, with Heathrow, also with a high-speed
rail link. Officials close to the Transport Secretary, Philip Hammond, said that
both options were being discussed but that there appeared to be more draw-backs
with the Northolt plans as the runway already there was aligned the wrong way
and the base was in the middle of a built up area which threw up more problems
than expanding Heathrow.