Greater Manchester’s 10 councils have agreed in principle to restructure their ownership of Manchester Airport to fund a swoop for Stansted.  Manchester Airports Group is seeking equity investment to give it the firepower to buy Stansted.  MAG is currently owned by the 10 local authorities, with Manchester city council holding a 55% stake and the others 5% each. Proposals have been put to the Association of Greater Manchester Authorities, seeking approval for a new ownership model to be adopted if an external investor can be secured.

Greater Manchester’s 10 councils have agreed in principle to restructure their ownership of Manchester Airport to fund a swoop for Stansted. Manchester Airports Group is seeking equity investment to give it the firepower to buy Stansted after current owner BAA was forced to put it on the market.

MAG is currently owned by the 10 local authorities, with Manchester city council holding a 55 per cent stake and the others five per cent each.

Proposals have been put to the Association of Greater Manchester Authorities, seeking approval for a new ownership model to be adopted if an external investor can be secured.

That would involve the councils diluting their stakes in the airport in order to bring a partner on board.

Details of the extent to which their holdings would change are not being revealed, though the M.E.N understands Manchester council would retain at least a joint majority stake.

The individual councils now need to individually give the plans the green light in the coming weeks.

It comes after MAG chief executive Charlie Cornish told the M.E.N talks are already under way with pension and infrastructure funds about possible investment. He hopes to narrow down the list of possible investors in the coming weeks and added he would consider a swoop for a European or American airport if a deal for Stansted didn’t come off.

A joint AGMA and MAG statement said the restructuring would only happen in the event of another “quality airport” coming on the market.

It added: “MAG is already key driver of jobs and growth in the north of England, but these proposals would allow the group to strengthen this position – and deliver maximum value for the local authority shareholders. “To make this possible, new governance arrangements are necessary, which each of the 10 Greater Manchester authorities would have to consider.

“The Association of Greater Manchester Authorities has agreed an in-principle framework for a new structure which will be considered by the individual local authorities over the coming weeks.

“In parallel with this process, MAG will begin to invite detailed proposals from private investors.” 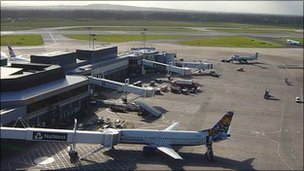 Manchester Airport’s owner has said it is looking into buying another UK airport, to expand the group.

Manchester Airports Group, which also includes East Midlands, Bournemouth and Humberside, said it wanted to bring in partners to help finance the deal.

The group has not said which airports it might bid for.

But Stansted and Edinburgh airports have had to be put up for sale by their owners BAA following a ruling by the competition regulator.

The local authorities which own Manchester Airports Group are considering the recommendations, which came after a strategic review.

Manchester City Council owns 55% of the group, while the nine other Greater Manchester authorities have 5% each.

“Manchester Airports Group (MAG) is aiming high to strengthen its position as one of the leading airport operators in the country,” said a joint statement by the authorities and the airport.

“MAG is already a key driver of jobs and growth in the North of England, but these proposals would allow the group to strengthen this position – and deliver maximum value for the local authority shareholders.”

It added that it would now invite private equity investors to submit proposals for the deal. The process of choosing an investment partner is expected to take a few months.

The Competition Commission first ruled three years ago that BAA’s dominance in London and Scotland meant it must sell Gatwick, Stansted and either Glasgow or Edinburgh airports.

It has since sold Gatwick, recently said it would put Edinburgh up for sale, and has lost a long-running appeal against the sale of Stansted.

GIP and 3i frontrunners to buy Edinburgh Airport

February 11, 2012    Global Infrastructure Partners (which owns Gatwick and London City Airport), 3i and a consortium backed by US private equity giant Carlyle Group are due to take an early lead in the race for Edinburgh Airport as the deadline for first-round bids expires this week. The airport is valued at £400m-£600m, and JP Morgan is also interested. Stagecoach boss Sir Brian Souter has ruled himself out of bidding in the first round, though may get involved later through his Souter Investments vehicle. Arcus Infrastructure Partners, owner of Forth Ports in Edinburgh, was named as another potential buyer but is also believed to have decided against. Bidders say the asset is attractive as it has been underdeveloped by BAA.   Click here to view full story…

January 15, 2012    JP MORGAN, the US financial institution, is believed to be the latest to express an interest in bidding for Edinburgh airport. The bank is believed to be sounding out interested parties ahead of the deadline for offers in March. Potential bidders will submit bids in excess of £400 million. A preferred bidder will be selected by the summer. The growing list of those interested in buying Edinburgh 3i and the US-based Carlyle Group (included Sir Brian Souter) and GIP. Arcus European Infrastructure Fund may also table an offer. Also a consortium of Scottish businessmen. A price of £400 – 600 million is likely.    Click here to view full story…

October 20, 2011    BAA is putting Edinburgh Airport up for sale with an estimated price tag of about £500m. They chose Edinburgh instead of Glasgow, as it would fetch a higher price, is performing better and would be easier to sell. Bidders include GIP (owns Gatwick), Manchester Airports Group, Borealis Infrastructure, and Macquarie. BAA is now starting sale preparations and expects to formally approach the market in the New Year in order to agreeing a sale by Summer 2012.   Click here to view full story…

October 8, 2011    BAA has been told by the Competition Commission that it must sell either Edinburgh or Glasgow before it sells Stansted. Earlier this year it had said BAA should sell Stansted first, but BAA appealed which has caused delay. So now the sale of one of the Scottish airports must be brought forward, and will begin soon, as it will take longer for Stansted to be sorted out. BAA says it is now clearer than ever “that Heathrow & Stansted serve different markets.”    Click here to view full story…