Previous owners Peel Airports has sold its 75% majority share-holding in the airport to Peel Investments (DTVA).  So the airport can continue in business and get over its current crisis.  Peel Airports is 65% owned by Vantage Airport Group (formerly Vancouver Airport Services) and 35% by The Peel Group.  Peel Investments is now the majority shareholder in the airport, with the rest of the shareholding (25%) continuing to be owned by the six local authorities, including Hartlepool Borough Council.  Peel Airports Limited, (as different part of the Peel Group) continues to be a major shareholder in Liverpool John Lennon Airport and Robin Hood Airport in Doncaster. Durham Tees Valley airport had less than 22% the number of passengers in 2011 as it had in 2006. 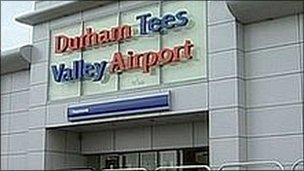 The move will allow the airport to continue operational activities without change to workers or airlines.

The remaining 25% shareholding will stay with the six local authorities.

Stockton South MP James Wharton said: “We all want to see Teesside continue as a passenger airport and be as successful as possible.”

Peel Investments has been involved in the airport through its 35% share of Peel Airports Limited, which it retains, as PAL continues to be a major shareholder in Liverpool John Lennon Airport and Robin Hood Airport in Doncaster.

The remaining 65% ownership of Peel Airports Limited is held by Vantage Airport Group which is now no longer involved in Durham Tees Valley Airport.

Stockton South MP James Wharton said: “Hopefully Peel Investments will now be able to make a success of this important piece of our regional transport infrastructure.

“We must all now pull behind the new owners and encourage them to ensure it becomes the commercial success it should always have been.”

Peel Airports Limited has been asked by the Peel Investments to act in an advisory role to assist with the day to day operations at the airport.

Peel Investments is owned by the Manchester based Peel Group.

Durham Tees Valley’s shrinking passenger numbers – down to less than 22% of what they were in 2006:

Peel Airports Limited is pleased to announce that it has concluded the sale of its majority shareholding in Durham Tees Valley Airport to Peel Investments (DTVA) Limited, a wholly owned subsidiary of The Peel Group, securing the continuation of operations and business at the airport.

Peel Airports Limited is 65% owned by Vantage Airport Group (formerly Vancouver Airport Services) and 35% by The Peel Group. Peel Investments (DTVA) Limited is now the majority shareholder in Durham Tees Valley Airport, with the remaining minority shareholding continuing to be owned by the six local authorities.

Peel Airports Limited has been asked by the Peel Group to act in an advisory role to assist with the day to day operations at the Airport. This change of ownership will mean it will be business as usual for airport employees, airlines and passengers using Durham Tees Valley Airport.

Craig Richmond, Chief Executive Officer, Peel Airports Limited commented, “Since announcing in December 2011 that we were seeking a buyer for our shareholding in the airport, we appreciate this has been a period of uncertainty for the staff, our airline customers, passengers and for the region as a whole. I am therefore pleased that we have been able to conclude this sale process, with our partners the Peel Group purchasing our shareholding and continuing to maintain the airport’s operational activities.”

Peter Nears, Strategic Planning Director for the Peel Group commented, “We have seen significant interest and support for the airport from across the region during this difficult period and are looking forward to capitalising on this support and working with stakeholders in the region going forward.”

Award-winning Liverpool John Lennon Airport is one of the UK’s longest established airports and also one of Europe’s fastest growing. Adjacent to the River Mersey it serves more than 70 European destinations and is a base for Europe’s two largest low cost airlines Ryanair and easyJet.

The airport is already one of Merseyside’s major employers. It is forecast to handle more than 12 million passengers by 2030 as well as 220,000 tonnes of cargo and this expansion will create thousands of new jobs.

Robin Hood Airport Doncaster Sheffield is the UK’s newest purpose built international airport. It opened for its first commercial flight on 28th April 2005, and now handles more than one million passengers a year.

The airport serves more than 40 destinations including the Caribbean and Egypt and is capable of handling approximately two million passengers and 50,000 tonnes of freight a year by 2014.

Durham Tees Valley Airport handles almost 700,000 passengers a year. A former RAF station, it was converted into a civilian airport in 1966 with Peel taking over as a strategic partner, and majority shareholder, in 2003. Huge investment by Peel resulted in an access road to the terminal, car park improvements and an enlargement of the terminal building. It serves UK and European destinations.

17th February 2012   (Northern Echo)   The new owner of Durham Tees Valley Airport (DTVA) has sought the help of politicians to secure a long-term future for the business. The Peel Group has lobbied Shadow Transport Secretary Maria Eagle and Louise Ellman MP, chairwoman of the Commons Transport Select Committee, about the importance of the airport to the local economy. Peter Nears, Peel’s strategic planning director, has also begun a round of meetings with the area’s MPs.  Six Tees Valley councils own a minority share in the airport.  Mrs Ellman said it was important that the role of regional airports in promoting employment was recognised.   Click here to view full story ….