A deal has been struck to sell Edinburgh Airport to the owner of Gatwick and London City airports for £807m.  GIP has beaten a consortium led by another infrastructure investor, JP Morgan Asset Management.  The sale price, slightly more than expected, is payable in full at closing of the deal, expected in May.  It is thought that GIP intends to improve the speed at which passengers move through the airport at check-in, security and baggage handling, and to link the airport with new routes. Its investment pattern is to sell the asset on after about 7 years.  GIP is said to have improved the passenger experience at Gatwick.  Edinburgh airport  handled 9.5m passengers last year, caters for about 40 airlines, serves more than 100 destinations and currently generates around £50m EBITDA annually. 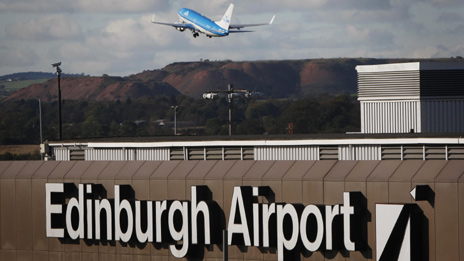 A deal has been struck to sell Edinburgh Airport to the owner of Gatwick and London City airports for £807m.

Global Infrastructure Partnership (GIP) has beaten off competition from a consortium led by another infrastructure investor, JP Morgan Asset Management.

The operator BAA was ordered to sell either Edinburgh or Glasgow airports.

The sale price is payable in full at closing of the deal, expected in May.

Edinburgh Airport was put on the market by its owner BAA last October, after the Competition Commission ruled that it had to sell either Edinburgh or Glasgow.

The winning price, expected to be paid at the end of May, is considerably more than had been expected.

Three years ago, Spanish-owned BAA sold Gatwick Airport to GIP, under the same regulatory requirement to break up assets that had previously been state-owned.

It is thought that GIP intends to improve the speed at which passengers move through the airport at check-in, security and baggage handling, and to link the Scottish capital with new routes.

Its investment pattern is to sell the asset on after about seven years.

Adebayo Ogunlesi, chairman and managing partner of GIP, said: “Edinburgh Airport is a high quality infrastructure asset. Its acquisition is a landmark deal for GIP and represents the first investment by GIP II.

“We see significant opportunity to apply our tested and successful operational expertise and our knowledge of the global airports sector to develop and enhance the performance of Edinburgh Airport in years to come.”

Colin Matthews, chief executive of BAA, said: “Edinburgh Airport and its team have been part of BAA for a long time and we are proud of its achievements.

“We wish the new owners every success and are confident the airport will continue to flourish.

“BAA will continue to focus on improving passengers’ journeys at Heathrow and its other airports.”

The Scottish Passenger Agents’ Association welcomed the news and said that GIP had improved the experience for passengers at Gatwick since it took over the airport three years ago and expected the same at Edinburgh.

Simon Calder, travel editor at The Independent, said: “What they have done is remarkable things.

“They’ve greatly improved the passenger experience so that people are tending to choose the airport ahead of others and secondly they are attracting airlines.”

He added: “It’s now going to get very, very interesting and the beneficiaries will be the Scottish travelling public.”

Meanwhile a spokesman for the unsuccessful bidders, JP Morgan Asset Management, said: “While we are disappointed at the outcome. We wish the new owners and all concerned with Edinburgh Airport well.”

GIP to snap up Edinburgh airport in £850m deal

Global Infrastructure Partners, the owner of Gatwick and City airport, is poised to acquire Edinburgh airport for around £850m.

The investment firm is in advanced discussions to buy the Scottish airport from Heathrow owner BAA and a deal could be announced as early as today, The Daily Telegraph has learned.

GIP, founded by former dealmakers from Credit Suisse and General Electric, has been vying with a consortium led by JP Morgan’s infrastructure fund to buy the asset.

Barring an eleventh hour hitch, City sources said GIP is now the clear “front runner” to win the contest following the second and final round of bidding last Tuesday.

The airport will bolster GIP’s position as one of the leading airport owners in Britain. The investment company bought Gatwick airport from BAA three years ago for £1.5bn.

Sources claimed Tiaa-Cref recently dropped out of JP Morgan’s consortium which may have weakened its tilt for the Scottish capital’s airport.

BAA, a division of the Spanish infrastructure company Ferrovial, has been forced to sell Edinburgh after regulators decided it controlled too much of the UK market. The company was ordered to off-load three of its airports.

Some of the other parties that looked at buying Edinburgh airport – which handled 9.5m passengers last year, caters for about 40 airlines and serves more than 100 destinations – included private equity firms, Carlyle and 3i.

The private equity groups dropped out, apparently because of the high price the asset was commanding.

The price tag is considered impressive by analysts since the airport currently generates around £50m before interest, taxes, depreciation, and amortization (ebitda) on sales of £110m.

But, unlike other airports, the price is not hampered by the “regulatory asset base” or RAB which is a proxy value for the asset set by the regulator.

Meanwhile,experts said the price is not unreasonable in an environment where infrastructure assets are in hot demand.

Gatwick Airport was sold for £1.5 billion in October 2009
http://www.telegraph.co.uk/finance/newsbysector/transport/6394265/Gatwick-airport-sold-for-1.5bn.html

In June 2006, a Ferrovial-led consortium purchased  BAA Limited, for £10 billion

How to BAA and GIP annual passenger numbers compare?

Looking at the situation once Edinburgh has been sold to GIP: