All BMI Baby routes from Belfast to go by 11th June, and Flybe moving into the gap

BMI Baby will stop all its flights from Belfast City airport from 11th June.  The airport said 420,000 of its passengers last year had flown with BMI Baby.   BMI Baby services from East Midlands to Amsterdam, Paris, Geneva, Nice, Edinburgh, Glasgow and Newquay, and from Birmingham to Knock and Amsterdam, will end on the same date. BMI Baby said it would not affect BMI mainline’s service from Belfast to London Heathrow.   Monarch said it would run services on 25% of routes operated by bmibaby from the Midlands.  A BALPA spokesman said: “The frustration has now turned to anger following the news that Flybe (which is part owned by BA) has moved onto many of these bmibaby routes without any opportunity for staff to look at options and alternatives.” Flybe is moving quickly onto some of the abandoned routes. 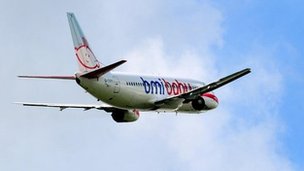 The holiday plans of thousands of customers could be affected

George Best Belfast City Airport’s chief executive has said he is hopeful that by next week another airline will take the place of BMI Baby, which stops flying from the airport in June.

The news has affected thousands of passengers’ summer holiday plans.

Brian Ambrose said he had suspected the firm might pull out of Belfast once its summer schedule had ended, but the announcement was surprising.

He said the airport would announce next Friday if a replacement had been found.

“We’ve had to go back to airlines in the last 24 hours and re-engage on the basis that the BMI Baby routes are going to terminate on 11 June,” he said.

“It’s a big ask to get another airline lined up for 12 June, and we’ll make an announcement in a week’s time on whether we’ll be able to backfill immediately or if there will be a gap.”

The budget airline was taken over last month by IAG, parent company of British Airways.

IAG said it had to act in the face of big losses, and promised to provide full refunds.

“Why did British Airways not give passengers sufficient warning that they were withdrawing BMI Baby from Northern Ireland? When did they take this decision?

“Why are British Airways withdrawing BMI Baby from Belfast in advance of the busy holiday season when other bases around the UK are to stay open until the autumn?

“Why will it take up to 21 days to refund the cost of flights? The CAA have indicated to us that the airline is obligated under EU law to make this repayment within seven days.”

“Why do BMI Baby say there may be a delay in getting through to their helpline? An inability to get through to the airline is causing even further unnecessary distress for consumers,” she said.

Economy minister Arlene Foster, who had been planning to travel with the airline next month, said it was “hugely disappointing”.

“A lot of people have booked for sun holidays and they will of course be worried about the extra cost that it’s going to mean for them, because they are going to have to book with alternative airlines,” she said.

“I think the timing was somewhat of a surprise. We knew that BMI Baby was in some difficulties.

“We knew that they were losing money and when (IAG chief executive) Willie Walsh was here just last week, I think the indications were not good.

“However, we are surprised at the fact this has happened so quickly and it has come as a shock.”

The airport said 420,000 of its passengers last year had flown with BMI Baby.

BMI Baby transferred to the ownership of IAG last month, and has entered talks with unions about its future.

BMI Baby said it would not affect BMI mainline’s service from Belfast to London Heathrow.

Peter Simpson, BMI interim managing director, said the company had lost £100m in the last four years and would have to be “realistic” about its options.

Monarch Airlines has unveiled plans to cash in on the looming demise of budget airline bmibaby
Saturday May 5,2012  (Daily Express)

MONARCH Airlines has unveiled plans to cash in on the looming demise of budget airline bmibaby. It said it would run services on 25% of routes operated by bmibaby from the Midlands.

Stansted: bmibaby flights to Belfast to be axed from next month

LOW fare carrier bmibaby is set to close later this year, it was confirmed today, with its Stansted-Belfast route among a number to be axed from next month.

Ownership of bmibaby, and sister company BMI Regional, transferred to International Airlines Group, the owners of British Airways, last month, when it completed the purchase of BMI from Lufthansa.

IAG had consistently said that bmibaby and BMI Regional were not part of its long-term plans and consultations have now started with unions about the closure of bmibaby closure in September.

“Progress has been made with a potential buyer for BMI Regional, but so far this has not been possible for bmibaby, despite attempts over many months by both Lufthansa and IAG,” said IAG today.

“bmibaby has therefore started consultation to look at future options including, subject to that consultation, a proposal to close in September this year.”

Peter Simpson, bmi interim managing director, said: “We recognise that these are unsettling times for bmibaby employees, who have worked tirelessly during a long period of uncertainty.

“bmibaby has delivered high levels of operational performance and customer service, but has continued to struggle financially, losing more than £100 million in the last four years. In the consultation process, we will need to be realistic about our options.

“To help stem losses as quickly as possible and as a preliminary measure, we will be making reductions to bmibaby’s flying programme from June. We sincerely apologise to all customers affected and will be providing full refunds and doing all we can with other airlines to mitigate the impact of these changes.”

All bmibaby flights to and from Belfast will cease from June 11, although this will not affect BMI’s services to London Heathrow.

bmibaby services from East Midlands to Amsterdam, Paris, Geneva, Nice, Edinburgh, Glasgow and Newquay, and from Birmingham to Knock and Amsterdam, will end on the same date.

Colin Whyatt, of the GMB union, said: “This is absolutely devastating news which puts 800 jobs at risk, almost half in the East Midlands.

“bmibaby had been reorganised last year and GMB members hoped it would be sold. Two potential bidders have pulled out and unless a new bidder comes forward in the next 90 days, these jobs will go, on top of 1,200 jobs lost from the reorganisation of BMI.”

Jim McAuslan, general secretary of the pilots’ union Balpa, said: “This is bad news for jobs. Bmibaby pilots are disappointed and frustrated that, even though there appears to be potential buyers, we are prevented from speaking with them to explore how we can contribute to developing a successful business plan.

“The frustration has now turned to anger following the news that Flybe (which is part owned by BA) has moved onto many of these bmibaby routes without any opportunity for staff to look at options and alternatives.  Balpa’s priority is to protect jobs; and we will use whatever means we can to do so.”

IAG warned last month that the takeover of BMI was likely to lead to up to 1,200 job losses. Positions facing the axe are at BMI’s head office at Castle Donington in Derbyshire and at regional airports, although IAG said that, without the acquisition, all 2,700 jobs at BMI could have been lost.

Flybe is trying to bring forward plans to start new routes from East Midlands airport from the autumn to early summer.

The move comes after Bmibaby’s new owner IAG decided yesterday to shut down a series of routes from the airport in June with the airline due to stop flying completely in September.

Flybe earlier this week announced the new routes from East Midlands to Amsterdam, Paris Charles de Gaulle, Edinburgh, Glasgow and Jersey, which it had originally planned to run from October. Bmibaby is due to stop flying on all these routes – except Jersey – from June 10.

Andrew Strong, Flybe UK’s managing director, said: “We have been surprised at Bmibaby’s decision to close some of its routes within just six weeks time. As a result, we are doing everything we can to work with our airport partners in ensuring that those passengers wanting to travel from East Midlands airport are not left stranded.”

Flybe is also planning to double its existing weekday flights from East Midlands to Belfast City airport to four a day while adding more capacity on its Birmingham-Belfast route as well.

“We realise that many passengers rely on East Midlands for their regional and European travel,” added Strong. “We are therefore pleased that we can offer them continuity of service with increased weekday frequency on our Belfast City service from June 11.”