The opening of Berlin’s new airport will be delayed by up to 3 months due to fire safety problems. This an embarrassing blow to the German capital’s flagship project less than a month before its planned launch, which had been due for 3rd June.  Berlin-Brandenburg Airport, which will also be known as Willy Brandt Airport after West Germany’s Cold War chancellor, may now open in the 2nd half of August, after the school holidays in Berlin and Brandenburg.  Flights were to have been transferred from Berlin’s Tegel airport, to the new one. The problem is that the fire safety installations – notably smoke extractors – were not ready, so a safe evacuation of passengers could not yet be acheived in the event of fire.  The delay will cost the two existing airports, and some airlines, money. The opening of what will be Germany’s third largest airport after Frankfurt and Munich, has been postponed once already. 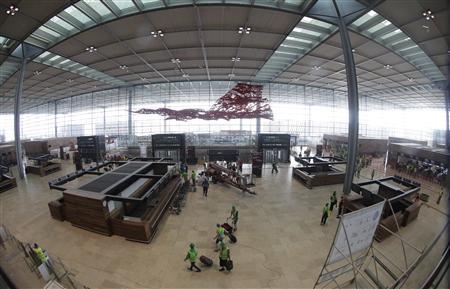 By Annika Breidthardt and Sabine Siebold

(Reuters) – The opening of Berlin’s new airport will be delayed by up to three months due to fire safety problems, authorities said on Tuesday, dealing an embarrassing blow to the German capital’s flagship project less than a month before its planned launch.

Nearly a quarter of a century after the Berlin Wall came down and 13 years after the government moved back to Berlin as the unified capital,Germany is still struggling to open an international airport to replace two from its Cold War past.

Berlin-Brandenburg Airport, which will also be known as Willy Brandt Airport after West Germany’s Cold War chancellor, had been scheduled to open on June 3. But the airport’s operator said the move from the city’s Tegel airport was suspended with immediate effect.

Matthias Platzeck, state premier of the neighbouring Brandenburg region, said he now hoped the airport would be open in the second half of August, after the school holidays in Berlin and Brandenburg.

The opening of what will be Germany’s third largest airport after Frankfurt and Munich, has been postponed once already.

Platzeck, who said he was “livid”, expects the airport management to set a new date by next Monday.

Keeping the two older airports open will cost about 15 million euros a month and airlines that have been selling tickets for flights from Berlin-Brandenburg for months face additional costs.

The 2.5-billion-euro airport initially aims to attract up to 27 million passengers annually, which will still make it about half the size of Germany’s main airport in Frankfurt and less than a third of the world’s busiest airport in Atlanta.

The airport’s technical chief, Manfred Koertgen, said fire safety installations – notably smoke extractors – were in place he doubted that they could be operational, or passengers evacuated safely in an emergency, by the June 3 deadline.

To avoid a repeat of the technical problems that hit the opening of Terminal 5 at London’s Heathrow airport in 2008, the operator of all airports in Berlin, Flughafen Berlin Brandenburg GmbH FBB.L, has been rehearsing for opening day for months.

It has recruited more than 10,000 local volunteers to try out the check-in and baggage handling – using suitcases filled with bricks to make the tests realistic – and report back on how easy it is for passengers to find their way around.

As recently as last Friday, when foreign journalists were given a tour, construction workers in hard hats were scurrying around a site with dangling cables and other building materials, but officials were confident of a smooth opening on June 3.

“We’ve gone through six months of testing with a total of 10,000 extras and 20,000 staff employees going through dry runs,” an airport spokesman told reporters then.

One of the first challenges for the airport was to be handling passengers travelling to Poland in June for the Euro soccer championship.

Mayor Wowereit said it would have been irresponsible to stick to the opening date, even if it could theoretically still have been reached.

Airport manager Rainer Schwarz would not comment on the costs of the delay but Wowereit said the delay would push the airport’s financing “to its limits”.

“We have noticed in test runs over the past days and weeks that there is still need for action on many matters,” a Lufthansa spokesman said in a statement.

Lufthansa cancelled plans to fly an A380 mammoth jet from Berlin to Frankfurt on June 3 to celebrate the opening of the new airport but stuck to its plans to offer more flights from Berlin from next month.

It said it was in talks with Tegel to secure more temporary slots. Germany’s second largest carrier, Air Berlin (AB1.DE), said the delay would cause “additional costs which are incalculable at the moment”.