Munich residents voted against development of a 3rd runway, in a poll by the City of Munich, which owns 23% of the runway (state and federal government own the rest). Though the city only owns part of the airport, this is thought to be a veto. Munich Mayor Christian Ude said he would accept the result “without ifs or buts.” Bavaria’s state government, however, said it still hopes the runway could eventually be built.Munich is Germany’s second-biggest airport. The vote has dealt another blow to airlines clamouring for growth in Germany. Just over 54% of polled voters were against the new runway and 45.7% in favour, according to preliminary results of the vote on Sunday. A German district government ruled in favour of the €1.2 billion Munich runway project almost a year ago. This vote shows, quote: “how difficult it has become to make clear the significance of important infrastructure projects in our country,’  according to the Munich airport chief.


This is an astonishing victory for the campaigners.  Most of Munich is not under the flight paths.  The people outside the city who are under the flight paths were not allowed to vote.  And they took on the entire political establishment (except the Green Party) which poured millions into the referendum.  It is a result for high-profile, high-class campaigning.

It does not mean that the runway is 100% off the agenda but the Mayor of Munich has accepted that it will be very difficult to go ahead with it now. 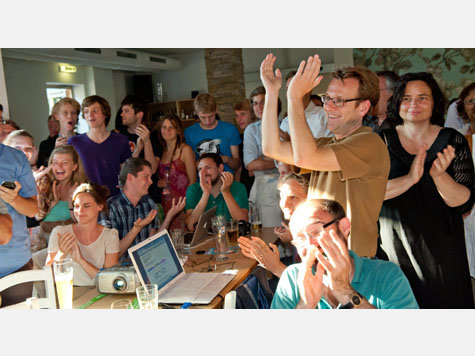 MUNICH,  (Reuters) – Munich residents voted against development of a third runway at Germany’s second-biggest airport, dealing to another blow to airlines clamouring for growth in Europe’s biggest economy.

Just over 54 percent of polled voters were against the new runway and 45.7 percent in favour, according to preliminary results of the vote on Sunday.

Airlines such as Deutsche Lufthansa and Air Berlin have already been hit by a ban on night flights at Germany’s biggest airport in Frankfurt and delays to the opening of a new airport in Berlin.

‘The fact that a relative majority of Munich residents voted against the construction of a third takeoff and landing strip shows how difficult it has become to make clear the significance of important infrastructure projects in our country,’ Munich airport chief Michael Kerkloh said in a statement.

Airport expansion is a major issue around the world as the interests of airlines and airport operators trying to meet growing demand for air travel are pitted against those of people who live near airports and see their property values diminished by planes roaring overhead.

Business leaders in Britain earlier this year urged the government there to rethink its opposition to the developed of a third runway at Heathrow airport, which is operating at almost full capacity.

Hong Kong has approved construction of a HK$136 billion ($17.5 billion) third runway at the city’s international airport, though there are lingering concerns over environmental costs.

A German district government ruled in favour of the 1.2 billion euro ($1.5 billion) project in Munich almost a year ago.

But the city of Munich, which owns 23% of the airport, polled residents on whether it should use its veto power to block the airport expansion, which the airport’s operator has said would create about 11,000 new jobs.

Munich airport has said the new runway is necessary to meet growing demand for air travel. Lufthansa said the outcome of the vote was ‘regrettable’ and reiterated its warning that it could shift investments elsewhere if it cannot add capacity in Munich, one of its two German hubs.

Munich airport handled almost 38 million passenger last year and expects that figure to rise to more then 50 million in 2015, thanks to a 650-million-euro expansion of its Terminal 2, some 40 percent of which is being financed by Lufthansa.

BERLIN (AP) – Voters in Munich have rejected plans to build a third runway at the city’s airport, the second-busiest in Germany after Frankfurt.

Authorities in the Bavarian capital said 55.4 % of voters in a referendum Sunday backed a motion calling on the city, one of three owners of the airport operator, to oppose a new runway.

The company’s rules call for unanimity on important decisions, and Munich Mayor Christian Ude said he would accept the result “without ifs or buts.” Bavaria’s state government, however, said it still hopes the runway could eventually be built.

Supporters, including the center-right state government and the center-left Ude, said it is important for the region’s economic development. But the Green party and other opponents dispute the need for it.

and recent Blog by John Stewart on the situation in Germany, with it numerous airport battles, at  Read the Blog

At the weekend there was a two day occupation in the centre of Munich, before the referendum for the people of Munich to give their views on a 3rd runway.  Local people, together with FOE Bavaria and Plane Stupid Germany, occupied a key site in Munich for two days from Friday until Saturday where they are putting on a programme of free bands!  Presumably they had some understanding with the police.

This Sunday at the Munich agree to build the third runway.Proponents and opponents are fighting to the last. Transport Minister Zeil advertises the project – Green Party leader, Janecek,  wants to stop it .

On Sunday, the Munich citizens are called upon to vote on the construction of a third runway at the Munich airport. Photo: AP

MUNICH. Before Munich referendum on the third airport runway this Sunday proponents and opponents are fighting with all his might and to the last second by the majority. While Transport Minister Martin Zeil, Bavaria’s (FDP) once campaigned vigorously for the controversial project, Green-land, Dieter Janecek said for the third runway completely unnecessary.

Approximately 1.032 million are eligible to vote on Sunday to Munich

Vote is called. Crucial to a victory by proponents or opponents of the majority of the valid votes – and this majority must be at least ten percent of the voters. If enough voters participate and vote against the construction of the project is stopped. Otherwise, the process continues. Then at the end, the courts have the word.

Zeil pointed out that the number of flights since the airport opened 20 years ago had more than doubled. “The Munich Airport is an extraordinary success story.It has been 20 years ago never thought in the wildest dreams did that it would develop so well, “he said. But now the capacity is exhausted the existing two runways – and will expect a further sharp rise in the number of aircraft movements. The third runway is therefore absolutely essential – especially if the airport wants to keep his position as an international hub and expand. In addition, good flight connections played all over the world in attracting foreign companies in the region a central role.

Janecek, however vehemently campaigned for a halt to the project. “We simply see no need for a third runway,” he said. The forecasts, which predicted the coming years, a strong growth are completely untrustworthy. “I think this is Luftikus forecasts,” stressed the head of the Greens. Given the ever-rising oil prices, he no longer believe in massive growth in air travel. “At the projected growth unchecked, it will not come – and I think the idea of ​​unbridled growth for yesterday,” said Janecek.

“We look at the evolution of the number of aircraft movements during the past few years and see where stagnation,” said Janecek.“On the other hand, we see the stresses that brings the airport for the region today with it. And we see the issues of climate and environmental protection. And if you take it all together, then we say that the two runways and sufficient that we can better manage well in the future, “he said.

Zeil also argued that the airport and the construction of the third runway has a positive impact on economic growth in the region. “A relationship between infrastructure and growth no one can deny seriously.” Also will make the third runway for a total of 11,000 new jobs.

ButKamacel does not accept the argument – by proponents of the runway – that  the airport is a job creator. ” We already have full employment In the region  even before the opening of the airport,” he said.

Specifically, the citizens of Munich on Sunday to decide whether the City should vote as a shareholder of the airport in the shareholders’ meeting for or against the construction of the third runway. And even if Munich with 23% of the smallest shareholder behind the Free State (51 percent) and federal (26 percent), the city is practically a veto. The directly affected citizens in the counties and Freising and Erding, however, can not co-decide about the third runway. (AP)