In a long and comprehensive article, (worth reading it all) economist Ann Pettifor sets out the reasons why Heathrow does not need to be expanded, merely improved. The article goes through the many arguments about why Heathrow is already a much larger airport than its rivals, with better connections to significant business destinations. It looks at airport expansion in relation to economic growth (GDP), and finds no correlation. It notes Germany’s economic strength in 2010 and 2011, “which no one has suggested results in any significant way from the steady growth of Frankfurt airport.” It comments “To the extent that Heathrow is a drag on London’s competitiveness, we argue that this relates far more to its poor facilities and problems around security and immigration services. Overall, the airport terminals seem more designed for the retailers than for passengers, and BAA have failed to upgrade the facilities adequately over many years” and says improving “the passenger experience would do far more at lower cost that a new R3”. 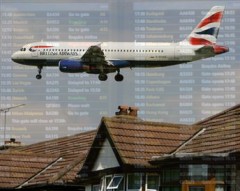 UK aviation makes up greater share of UK contribution to climate change than elsewhere. The world’s climate is changing rapidly (despite the army of powerful self-interested deniers), and we are experiencing more and more extreme weather events. Ironically, on the day the aviation industry launched a sophisticated, co-ordinated lobbying campaign for a third runway, scientists announced a record Arctic ice melt. As the Guardian reported, “the 2012 figure has beaten the previous record (2007)… [and] reveals that global climate breakdown is proceeding more rapidly than most climate scientists expected.”

According to a recent report published by the new economics foundation and the World Development Movement:

Yet it also receives enormous fiscal and financial advantages, including duty-free sales and tax-free fuel. If we are to have economic life, we first need a planet on which such activity can take place, which means that carbon-fuelled aviation cannot continue an exponential ‘flight path’ into the future.

Once this universal truth – that we have to control our use of finite resources and avoid greater damage to the atmosphere and to future generations – is recognized, a sensible policy for the future of aviation in the UK – and Europe – will be formulated. But that will not require or justify a third runway at Heathrow.

The arguments put forward for a third runway

Ms Duncan writes in the Times of 29 August that her “conversion” is the result of research she has done into London’s economy. She sees the city’s economy as healthy but fragile, with a real danger that London could “tip into another period of decline.” She argues that London has flourished because it is so international. Its success springs from its appeal to foreigners who invest here and “create the jobs that keep London’s economy working.” For this to continue, we need good flight connections – direct flights to more and more countries, including second tier cities.

Europe’s competitors with “bigger airports than London’s – Paris and Amsterdam” have increasing numbers of flights to such places, while Hong Kong, Dubai, Singapore want to take over London’s position as centre of international finance and have far better flight connections. The problem, says Ms Duncan is not London’s airport capacity, but its hub capacity – “airlines want to fly into airports that other airlines fly into”. And it is far simpler and cheaper, says she, to go for R3 than to build Boris Island Airport.

The big employers’ organisations back the airport expansions:

(Jon Cridland, head of the CBI)

“Every day, the UK is losing out to its European rivals on new routes to growing markets”.

Simon Walker of the Institute of Directors:

“The lamentable failure to increase airport capacity means that jobs are already being lost to our competitors”.

So with all that support, how can you be against? Well, let’s look first at some facts on airports, flights and passengers.

Before going further, it is also worth comparing London with New York, which is its main international comparator if not competitor. In 2011, JFK airport came 17th in the list of passenger numbers, with a total of 48 million passengers.

So the argument by the R3 lobbyists has to be that London’s and the UK’s economy is at risk despite the fact that it remains third largest airport in the world in passenger numbers, and with some 50% more passengers than New York, whose economy is also heavily dependent on FIRE (finance, insurance, real estate) services and tourism.
If we analyse the main European hubs in terms of direct connections to the BRIC countries – Brazil, Russia, India, and China, we find (as far as we could ascertain) the following for 2011:

Frankfurt, London and Paris are broadly similar, save for the German city’s links to Russia, which appears to reflect a different foreign policy approach to that country. Only Schiphol has in recent years built a considerably broader range of BRIC destinations. London remains far ahead in terms of connectivity to North America.
Our information complements (but has been separately researched) that summarised by AirportWatch – an umbrella grouping of environmental and community organisations – in a 2011 briefing entitled International Air Connectivity for Business.

This last point is crucial, and the briefing continues:

The vast majority of flights from all the European airports are intra-European, often covering relatively short distances. European governments need to decide whether to continue to permit most of the capacity at Europe’s airports to be taken up with short distance flights or whether to reduce the number of those flights – through fiscal measures, and slot allocation – in order to free up capacity for more intercontinental flights from key business destinations, particularly those in the fast-developing economies of Asia and South America. A carbon cap on aviation emissions will ensure that use of spare capacity does not result in an increase in overall emissions.”

No evidence that faster-growing hubs have a macroeconomic impact

But let us return to the question of whether having a major hub has a positive macroeconomic impact. Whilst Heathrow has grown only modestly in passenger numbers over the 11 years from 2000 to 2011, and Frankfurt not very much more, Schiphol and Paris CDG have both expanded by over 25% in passenger numbers. Can we notice any impact on GDP? The answer seems to us to be negative. Increase/decrease in GDP from previous year

Increase/decrease in GDP from previous year

If a decade of major growth in passenger numbers was to have any significant impact, it should be in favour of France and the Netherlands. In fact the differences are marginal and the variables so many that it is impossible to assign cause and effect – other than to note Germany’s strength in 2010 and 2011 which no one has suggested results in any significant way from the steady growth of Frankfurt airport. And so far in 2012, the economies of France, the Netherlands and the UK are all around or below zero, while Germany’s early-year growth seems to be ending.

We would not deny the importance of ensuring good air communications with emerging economies with whom commerce is increasing, or planned to increase. We therefore do not argue that the current pattern of destinations served by Heathrow is the ‘right’ one for the future. What we do assert is that – with over 100 million passengers using Heathrow and Gatwick each year – there are ways of addressing this without recourse to a major airport capacity increase. Government can and should regulate the airport industry in the national interest – the industry provides services of general (and genuine) economic interest, and should not be driven just by short-term market forces.

After all, the aviation industry receives enormous and unjustifiable fiscal and other economic advantages, which government can use to ensure that there are direct flights to ‘emerging’ destinations to enhance economic links as necessary. We note that some 75% of London’s demand is for leisure travel, and 25% for business, so there is room to ensure that business needs take priority where this is required – and leisure travel involves a net financial outflow as more Britons holiday abroad than vice versa.

The operator’s financial interest in expansion

We do not doubt that R3 at Heathrow would be to the great financial benefit of the operator, BAA, and its shareholders including the main one, Ferrovial, which is a Spanish infrastructure group. Earlier this year, Ferrovial divested itself of 5.88% of BAA, taking the company’s holding below 50%. According to the FT (23 February 2012):

The divestment of 5.88% of BAA, to take the company’s overall holding to below 50%, allowed Ferrovial to deconsolidate the subsidiary’s total debt from its own balance sheet, meaning net debt tumbled from €19.7 billion to €5.1 billion over the year.”

We can assume that, from Ferrovial and BAA’s perspective, building R3 would allow Heathrow to grow faster than is possible today. The status quo means that in effect, BAA can only collect a rent fixed by the current capacity limit; it requires a growth in capacity to enable its income to grow more rapidly, which would enable it to reduce the overall Ferrovial/BAA debt mountain.

Of course, major investment and construction at Heathrow would create employment over a period of years on a significant scale. If the overall cost was say £10 billion, this represents around 0.7% of annual UK GDP. That said, it would not come on-stream for several years, and would be spread over several years, so it would not help in the present crisis. But it is not an all or nothing issue. The same (we would argue, a greater) level of productive investment is required for more sustainable transport infrastructure projects – we support larger rail investment, for example, both in new highspeed routes that obviate the need for domestic air travel and enhance access to the rest of the country, and in upgrades to existing routes and facilities.

To the extent that Heathrow is a drag on London’s competitiveness, we argue that this relates far more to its poor facilities and problems around security and immigration services. Overall, the airport terminals seem more designed for the retailers than for passengers, and BAA have failed to upgrade the facilities adequately over many years (T5 notwithstanding). Despite (we read) a good recent performance during the Olympic Games, Heathrow has long suffered from excessive and frustrating queues – not just to enter the UK, but in particular for transfer passengers. So for London’s reputation as an attractive business centre, a joint programme and commitment by government, BAA and airlines to improve the passenger experience would do far more at lower cost that a new R3.

The future for Europe’s hubs – from competition to complementarity

Two final points on economic development of hubs. First, even in economic terms (let alone environmental) it is foolish to assume that air travel will continue to expand exponentially. There are limits, at least in the rate of increase of global air traffic, which will be reached within a relatively short period of a few decades at most – and maybe much sooner. Therefore, our second point, Europe’s hubs will not grow indefinitely; they will need to co-exist and look at how best to complement each other.

At present, everything is seen through the prism of ‘competition’ between hubs, but when one looks at the destinations each serves, there is a general logic related to the economies, politics and historic links of each country. If the concept of Europe as a single market is to have any sense, then we need to do away with the idea that every member state needs its own hub for all purposes – it is far more sensible to get agreement on cooperation which uses the strengths and roles of each hub to mutual
advantage.

By Ann Pettifor and Jeremy Smith. This article first appeared in a longer version in a Prime Position Paper with a summary of key points.

Ann Pettifor is a Director of PRIME Policy Research in Macroeconomics and a fellow of the New Economics Foundation, London. She is the author of books on sovereign debt and international finance. Wikipedia