MAG says it will make a bid to buy Stansted Airport, teaming up with Industry Funds Management (IFM) – an Australian group – to make the bid. The deal is understood to be worth around £1bn.  MAG owns Manchester airport, East Midlands and Bournemouth airports. MAG is currently owned by the 10 council authorities of Greater Manchester – the largest stakeholder being Manchester City Council, which owns 55%. If the deal went ahead, IFM would take a 35% stake in the group.  Under the plans, largest shareholder Manchester council would reduce its share from 55% to 35% of MAG. The remaining nine Greater Manchester councils would jointly have a 30% stake, down from 45%. Manchester council would have equal voting rights as IFM. 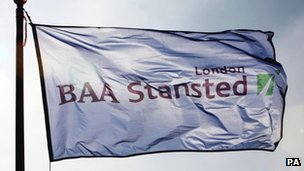 Stansted, based to the north-east of London, is the UK’s fourth busiest airport

The owner of Manchester Airport will make a bid to buy Stansted Airport, it has confirmed.

BAA decided to sell Stansted in the summer following a legal battle with the Competition Commission.

It had been fighting a ruling that it must sell because of the lack of competition between London airports.

MAG is currently owned by the 10 council authorities of Greater Manchester – the largest stakeholder being Manchester City Council, which owns 55%.

If the deal went ahead, IFM would take a 35% stake in the group.

Chief executive Charlie Cornish said: “Together with IFM, we can confirm that we will make a bid for Stansted Airport.

“Having conducted a strategic review of the group, we believe its addition to MAG will generate shareholder value in combination with our existing airports in the North, South West and Midlands markets.

“MAG has a proven track record in running profitable, growing airports through its successful approach to customer service, retail, car parking, property management and aviation development which would benefit passengers in the South East.”

It had been told to sell Gatwick, Stansted and either Glasgow or Edinburgh airports – but fought against the Stansted decision.

In August it decided not to take the case further and challenge the ruling in the Supreme Court.

Manchester Airports Group has confirmed it will sell a 35 per cent stake to Australian investors if it presses ahead with a swoop for Stansted Airport.

Last month, the MEN revealed Industry Funds Management had been selected as MAG’s investment partner, in a deal understood to be worth around £1bn.

Now, the agreement has been confirmed in papers set to go before Manchester council’s executive committee tomorrow (Wednesday).

They will then be put to the other nine councils over the coming weeks. The move will lay the foundations for a takeover of Stansted, which competition watchdogs have ordered current owner BAA to sell off. Analysts suggest the London hub could have a £1bn price tag.

A joint statement by the Association of Greater Manchester Authorities and Manchester Airports Group said: “In February 2012, MAG confirmed that it was inviting detailed proposals from private investors as part of a strategic review of the business. This phase of the review has now been completed with Industry Funds Management (IFM) selected as MAG’s preferred partner.

“MAG is continuing to consider opportunities to add a quality airport to the Group. An equity investment by IFM will only be triggered by the acquisition of another airport by MAG.”

IFM is an Australian infrastructure fund that has about $34bn invested in 26 different countries.

It has fought off interest from a Hong Kong billionaire and a venture involving the Abu Dhabi Investment Authority, which has already ploughed millions into Manchester City.

October 15, 2012    BAA has admitted that anyone else could run Stansted for at least £5m a year less, due to lower mangement costs. The information is disclosed in the “information memorandum” sent to bidders for Stansted, which is valued at around £1bn in August. The document is aimed at getting the best possible price for Stansted but one City source said it was bizarre to now be saying this. Stansted had £141.5m operating costs in its most recent year. Ryanair says the reason for the £5 million drop is that BAA has been lumping in expenses from its other 4 airports – Heathrow, Southampton, Glasgow and Aberdeen. The sale document makes out that another operator could get passenger numbers to bounce back to 24.6m by 2019, from 17.1 million this year. Some of the possible buyers of Stansted are MAG and a consortium led by Australasian investment manager Morrison & Co, Citi Infrastructure Partners, Macquarie and Deutsche Bank’s infrastructure arm, Morgan Stanley Infrastructure, JP Morgan and Li Ka-Shing’s CKI .  Click here to view full story…

10.10.2012 Ryanair has bowed out of the competition to buy Stansted airport after saying that owner BAA had indicated it would not sell the facility to any bidding consortium that included the low-cost carrier.  BAA and Ferrovial declined to comment. UK competition authorities would have blocked the airline from taking any more than a 25% stake. Analysts pointed out that any buyer of Stansted would eventually need to work with Ryanair to achieve growth – the airport has seen traffic figures fall by a quarter in the past five years. FT  see full story ….

September 22, 2012    The process of the sale of Stansted is believed to have started. A team that is headed by Morrison & Co, which operates in New Zealand, Australia and Hong Kong, is making a bid. The team also includes the New Zealand Superannuation Fund and Infratil. The interest of Infratil in Stansted has surprised some industry observers because it is currently trying to sell its two smaller British airports – Prestwick and Manston – which have both lost Infratil a lot of money. Infratil, which runs about £2.5bn of assets, has twice written down Manston and Prestwick in the past two years, with their carrying value almost halving from £70m to £36m today. The two airports lost around £6m last year. The Morrison consortium is believed to have held early talks with Ryanair, and is in competition with Manchester Airports Group, which is in a potential deal with Australia’s Industry Funds Management. And others. The sale is complicated by the Government’s review of airport capacity in the south east, led Sir Howard Davies. Click here to view full story…