September showed no increase in BAA airport passengers from September 2011, but a fall in ATMs

by contrast, the September 2011 figures for BAA airports are at  Sept 2011

Heathrow saw 6.3 million passengers pass through its terminals, a record for September and up 0.6% on the same month last year.

European scheduled traffic overall was up 0.2%. Within that passenger numbers to and from Spain were up 6.2%, but Greece and Portugal both saw their traffic fall 4.8%. North Atlantic traffic continued to perform well, up 4.5% on last September. Brazil and China passenger numbers increased 14% and 5.9% respectively whilst traffic to and from India fell 7%.

Overall, nearly 9.2m passengers passed through BAA’s five airports in September 2012, the same as September 2011 and an improvement on the falls of 4.1% in July and 2.0% in August.

At Stansted, passenger numbers were down 4.0% compared with September 2011, whilst traffic through Southampton declined 4.4%.

Traffic through Aberdeen was up 1.4% and Glasgow was up 5.6%, resulting in a total increase at the Scottish airports of 4.4%. [Edinburgh is no longer part of BAA, so they only have Glasgow and Aberdeen].

BAA Chief Executive Colin Matthews said: “Heathrow saw record passenger numbers in September. Traffic to and from the BRIC economies, other than India, demonstrates the on-going importance of hub capacity to connect the UK to growth markets. The Davies Commission must rigorously and objectively assess every option to meet our country’s economic needs.”

[BAA has plenty of spare terminal capacity at Heathrow – it could increase up to around 90 million passengers. See link . So getting in more passengers is no surprise.  Heathrow is nowhere near full!  AirportWatch comment] 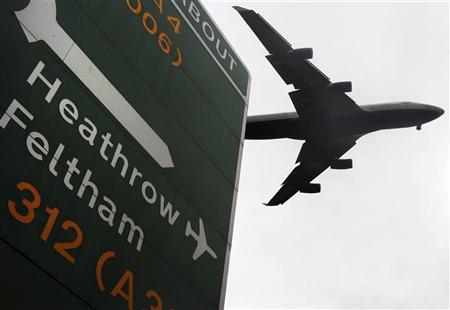 An aircraft comes into land at Heathrow Airport in London February 13, 2012. ( Reuters)

Strong traffic from Brazil and China counterbalanced a sluggish performance in Europe and a 7% decline from India, where India’s debt-strapped Kingfisher Airlines is facing possible shutdown and has been grounding planes.

BAA has complained it is falling behind rival European airports in Frankfurt, Paris and Amsterdam in the battle for lucrative emerging markets routes because of constraints on growth at Heathrow.

But Britain’s conservative-led coalition government has ruled out building a third runway at Heathrow before the next election in 2015, in part to appease its junior Liberal Democrat partners and boost its green credentials.

A commission chaired by former Financial Services Authority head Howard Davies charged with exploring ways to expand airport capacity in southeast England will report in the summer of 2015 after releasing an interim report next year.

“Traffic to and from the BRIC economies, other than India, demonstrates the on-going importance of hub capacity to connect the UK to growth markets. The Davies Commission must rigorously and objectively assess every option to meet our country’s economic needs,” BAA’s chief executive Colin Matthews said in a statement.

The number of passengers from Brazil and China at Heathrow rose by 14 percent and 5.9 percent respectively.

European traffic was up just 0.2 percent, weighed down by a 4.8 percent decline from Greece and Portugal.

Ferrovial shares were down 0.6 percent in morning trading.

(This story is corrected in ninth paragraph to show statistics refer to Heathrow, not all five BAA airports)

Heathrow and Gatwick are benefiting from an increase in passenger numbers to fast-developing countries in Asia and Latin America.

Both of the south-east’s major airports saw growth in overall travellers during September – Heathrow catered for 6.3 million people, which was up by 0.6 per cent on the same month last year, while Gatwick saw a 2.4 per cent rise to 3.4 million.

Heathrow was boosted by a 5.9 per cent rise in traffic to China while there were 14 per cent more travellers to Brazil. Although numbers to India declined by 7 per cent year-on-year, which is partly attributable to Kingfisher ending its flights from the airport earlier this year.

Colin Matthews, chief executive of Heathrow owner BAA, said: “Heathrow saw record passenger numbers in September. Traffic to and from the BRICBrazil, Russia, India and China – the major emerging economies of the world economies, other than India, demonstrates the ongoing importance of hub capacity to connect the UK to growth markets.”

Gatwick said that 20 per cent of its rise in passenger numbers in September had come from new flights by Asian carriers to Beijing (Air China), Seoul (Korean Air) and Vietnam (Vietnam Airlines).

“We remain committed to supporting those airlines to help them grow and prosper here at Gatwick and ensure London has the connectivity it needs today and in the future.”

Stansted, which is currently up for sale, saw a 4 per cent fall in traffic to 1.64 million in September, while Southampton passenger numbers were also down by 4.4 per cent to 168,000.