Work has started to extend the runway at Birmingham Airport in a bid to compete for long-haul flights.  It could be in use by spring 2014.  Planning permission was granted in 2009 and in February final approval was given for the £40m project to extend the runway by 400 metres. Chief executive Paul Kehoe said the extension would allow Birmingham to compete with Manchester for flights to the US and the Far East and double capacity.   Birmingham is currently England’s 2nd largest regional airport after Manchester, serving 9.6m passengers a year. David Learmount, from Flight International Magazine, said that although Birmingham could “theoretically” become a “hub” airport and fly to destinations like China, it was “very unlikely to”. He said not enough passengers would fly into Birmingham wanting to go on to those sorts of destinations, unlike Heathrow – and it would benefit largely local “pleasure passengers” who would be able to choose from more holiday destinations. [So not increasing business, and increasing the tourism deficit]. 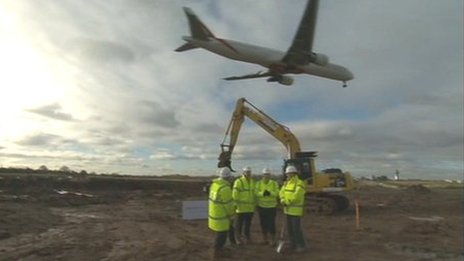 Work has started to extend the runway at Birmingham Airport in a bid to compete for long-haul flights.

Planning permission was granted in 2009 and in February final approval was given for the £40m project to extend the runway by 400 metres.

Chief executive Paul Kehoe said the extension would allow Birmingham to compete with Manchester for flights to the US and the Far East.

The runway extension is also part of a wider plan to increase capacity.

Airport bosses said an investment programme could allow it to double its capacity and increase the number of routes it serves.

They believe the runway extension could be in use by spring 2014.

The airport opened a new control tower in June, incorporating the latest technology, which managers hoped would help it attract airlines.

Paul Forrest, from the West Midlands Economic Forum, said having the runway extended would be “very significant” for the region’s economy and could potentially boost regional growth by 3-4%.

He said: “Birmingham is much more competitive than many other airports.

James Puxty, of the NEC Group whose base is next to the airport, said the runway extension was “really positive news” for the company.

However, he said work had to continue to improve the local transport infrastructure to make the airport development beneficial to the region.

British Airways and Virgin Airlines have said that even once the airport is able to take on the extra capacity, they will not consider moving any of their long-haul flights from Heathrow.

David Learmount, from Flight International Magazine, said that although Birmingham could “theoretically” – with its longer runway – become a “hub” airport and fly to destinations like China, it was “very unlikely to”.

He said not enough passengers would fly into Birmingham wanting to go on to those sorts of destinations, unlike Heathrow.

Mr Learmount said the greatest benefit would be to local “pleasure passengers” who would be able to choose from more holiday destinations.

It has taken more than 20 years of planning but finally work has started on Birmingham’s longer runway.

The airport says it is needed because it wants to offer routes further afield, but it can only do that if airlines decide to fly there.

Last week both British Airways and Virgin said they had no plans to use Birmingham.

So who would want to come?

The airport maintains that it is selling the benefits of flying into the West Midlands to airlines all over the world and not just those based here.

A connection to high speed rail is planned and if HS2 does get built, the airport would be just 39 minutes from London.

That’s faster by rail than to Gatwick and Stansted airports.

Airport bosses remain confident that a combination of packed south-east airports and the economic vitality of this region will persuade airlines to come once the runway extension is complete.

Some earlier news about Birmingham airport

November 22, 2012     British Airways and Virgin Atlantic Airways have hit out at Birmingham’s call for government intervention to encourage airlines to make better use of airports in the north and Midlands. They say Birmingham can never be a national hub airport, and that regional airports such as Birmingham could not provide an alternative to expanding capacity in the South East. BA and Virgin say Heathrow and Gatwick are full because people want to fly from them. Birmingham isn’t because people don’t. Also that Government should not intervene to force airlines and passengers to use airports they “do not want to fly from”. They also claim foreign governments are only interested in Heathrow in talks about opening new air routes and capacity. Birmingham Airport has launched a campaign to convince ministers that it can provide an alternative to expanding Heathrow without the need for a new runway – and it can double passenger numbers from 9 million today to 18 million without new infrastructure, and by extending its existing runway it will be able to serve 27 million people. The industry is fighting fiercely among itself on the capacity issue – and is likely to continue to do so for the foreseeable future.    Click here to view full story…

August 30, 2012     A letter in the Telegraph, signed by 35 MPs and 41 business people from the Midlands area, backs the expansion of Birmingham airport. The letter says the Midlands needs global air links to emerging markets, rather than just having the national hub airport in the south of England. They say airports in the great industrial cities in the Midlands, such as Birmingham, have huge spare capacity. They also talk of Birmingham having a second runway, and with that its capacity could rise from the current 8.6 million passengers annually (in 2011) up to 50 million. They are calling on the Government to support expansion of Birmingham’s airport to maximise regional growth. Back in September 2007 the airport abandonned plans for a 2nd runway, saying it was not needed and there would be enough capacity for up to 27 million passengers per year up to 2030.   Click here to view full story…

August 25, 2012    Those lobbying for Birmingham Airport to expand to become a regional hub are expecting their campaign will get a major boost when Liberal Democrats urge the Government to block new runways at Heathrow – and expand regional hubs instead at their autumn party conference in September. A motion by Julian Huppert calls for UK aviation to be based on accessibility from north and south; moving non-hub flights away from Heathrow, and making best use of existing airport capacity with improved transport links to Gatwick, Stansted, Luton,Manchester, Birmingham and Edinburgh.   Click here to view full story…

Vince Cable backs Birmingham, while Boris pushes for Stansted expansion (and the estuary)

June 19, 2012     The campaign to expand Birmingham Airport has gained a new ally – Business Secretary, Vince Cable. The airport recently launched a new London publicity campaign to persuade the Government to throw its support behind Birmingham at the expense of a third runway at Heathrow. Vince Cable said there was no resistance from residents to this expansion to Birmingham building up to being a “really serious international airport”, and this would be a “short-term, pragmatic solution that would bring an awful lot more flights to the country” while extra runway capacity at an airport in the South East could take years to deliver. So Boris has been suggesting a 2nd Stansted runway (opposed even by the aviation industry) and Vince is backing Birmingham, as interim “solutions” to an alleged problem of capacity.    Click here to view full story…

June 7, 2012    This is yet more publicity for Birmingham airport, to position itself as the solution to the airport capacity problem that is alleged for the south east. There are now roadside billboards in Northamptonshire, Buckinghamshire or Oxfordshire warning motorists of “Heathrow: congestion ahead” and questioning whether or not they are “Going in the right direction?” if heading to a London airport. And the strap-line of this high profile advertising campaign delivers the main message: “Birmingham makes more sense.” Paul Kehoe continues his campaign to boost his airport, saying that after a £200 million investment programme, they could handle an extra 9 million passengers a year. etc   Click here to view full story.

May 1, 2012     Paul Kehoe is lobbying for his airport again. He is calling on the Government to endorse the ational status of Birmingham Airport, and dismissed claims from BAA that Heathrow is the only answer to forging new air links with the country. He says, after a trip to China, that Chinese airlines are now considering Birmingham as a new destination once the runway extension is completed in 2014. He says there is a partnership between Birmingham airport and MG Motors, owned by Shanghai Automotive. There is a large Chinese community in Birmingham, and thousands of Chinese students come to Birmingham each year. Kehoe says since 2003, after London, Birmingham has attracted more Chinese investment projects than any other UK city. And he claims the number of passengers using Birmingham airport will rise from 9 million per year now to 36 million by 2030. !? 36 million ??    Click here to view full story…

April 28, 2012    Paul Kehoe, the CEO of Birmingham airport, is planning to start direct flights to China as an alternative to services from the south-east. He visited the Chinese city of Chengdu for the Routes Asia aviation conference last week and met with airlines to discuss possible direct flights between Birmingham and China. Birmingham is hoping to attract long-haul services from the airport once its runway extension is completed in 2014, and said feedback from the airlines had been positive. Kehoe says direct China flights from Birmingham will bring investment to the region, and giving airlines and passengers an alternative to battling with London’s congestion problems.   Click here to view full story…

Kehoe says BAA claims are a con, and Chinese companies are happy to fly to Birmingham, by-passing Heathrow

April 22, 2012      We have heard many aviation lobbyists claiming that if business people cannot get direct flights from Heathrow to a multitude of destinations, Britain’s economy is doomed. Now Paul Kehoe, CEO of Birmingham airport, publicly disagrees, wanting to persuade those in power that flights to or from Birmingham will be quite acceptable to commerce, and can bypass Heathrow. And Birmingham gets the profit. He says BAA is “trying to conflate the wider British economic interest with the interests of Heathrow”. Kehoe says the claims that Britain’s economy requires new runways in the south-east are a “con” that an industry dominated by BAA will not question. He says he was in Chengdu recently, talking to Chinese airlines that were considering any entry point into the UK. Kehoe says the Chinese he had spoken to would be happy to come to Birmingham: “they see the UK as an important market and don’t care how they get there.” So lots of in-fighting within the industry, like dogs over a bone … They all want the money …   Click here to view full story…