French First Lady Valerie Trierweiler,partner of Francois Hollande, is at the centre of a fresh political scandal after meeting opponents of a the planned Nantes airport, in defiance of the Jean-Marc Ayrault, the prime minister’s, support for the project. Ms Trierweiler is being accused of trying to undermine the PM;s authority by consorting with the protestors in Angers.   Ms Truerweuker was happy to chat to 3 opponents’ representatives, who also asked her to deliver a letter of protest to Hollande. Ms Trierweiler has caused various controversies, such as supporting gay marriage,  and is unpopular with the right wing. Her opponents also say her job as a journalist is ‘incompatible’ with her role as the President’s partner.


There is more, in French, about this at   link 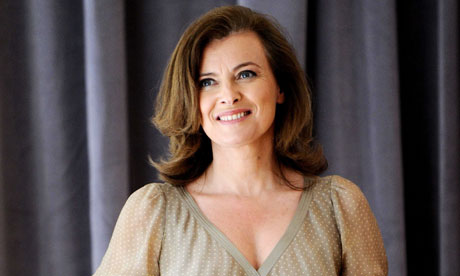 Approachable: Ms Trierweiler, 47, chatted with the protestors in Angers, western France, this weekend and was even asked to deliver a letter to her partner, President Francois Hollande

French First Lady Valerie Trierweiler is at the centre of a fresh political scandal after meeting opponents of a new airport – in defiance of the prime minister’s support for the project.

Ms Trierweiler is accused of trying to undermine PM Jean-Marc Ayrault’s authority by consorting with the protestors in Angers, western France, this weekend.

The new multi-billion pound airport in Nantes is due for completion in 2017 and has even been dubbed the ‘Ayrault-port’, a play on the prime minister’s name, because of his fierce backing.

But socialist President Francois Hollande’s 47-year-old partner was happy to chat to three opponents’ representatives, who also asked her to deliver a letter of protest to her boyfriend, activist group Greenpeace said.

It is the latest in a catalogue of blunders by Ms Trierweiler, who was recently branded a ‘meddler’ and ‘nothing more than the president’s mistress’ by one right-wing MP.

He added: ‘This was not an innocent gesture. What is she trying to do, further undermine the position of Jean-Marc Ayrault?

‘And if so, was it her idea or the president’s?’

He wrote on his website: ‘Madame Trierweiler, self-proclaimed First Lady, is nothing more than the President’s mistress.

‘What is she meddling in? What right does she have to speak out?

‘When one is in her position, after the blunders she has already made, it would be much better it she shut up.’

……..The rest of the article just continues about Ms Trierweiler and why her opponents don’t like her …………… Ayrault-port: Ms Trierweiler was accused of trying to undermine the authority of PM Jean-Marc Ayrault, pictured, who is fiercely backing the project

The 68-year-old MP for Paris also said her job as a journalist was ‘incompatible’ with her role as the President’s partner.

He added: ‘She might well want to get into politics, but she should stop being a journalist and define her position at the Elysee Palace.’

The First Lady has been the target of repeated media attacks since her boyfriend was elected president in May.

She was at the centre of accusations she tried to wreck the political career of Segolene Royal – the mother of Mr Hollande’s four children – by tweeting her support for a candidate standing against her in the parliamentary elections.

Ms Royal lost the election and later said she had been ‘stabbed in the back’ by Mr Hollande’s girlfriend.

The French leader’s former partner of 28 years went on to accuse Mr Trierweiler of costing her a place in Mr Hollande’s cabinet.

Ms Trierweiler also faced humiliation last month when her boss at a French magazine said she would be sacked at the end of this year. Unpopular: The First Lady has been the target of repeated media attacks since Mr Hollande, left, was elected president in May.

Glossy weekly Paris Match’s owner Arnaud Lagardere described her as ‘an unpinned grenade’ who has caused him ‘nothing but trouble’ and said he would not be renewing her contract in January.

Mr Lagardere’s comments were published in a biography of the millionaire media tycoon by journalist Jacqueline Remy.

Ms Remy said it was suggested to Mr Lagardere in June that having the French First Lady as an employee would surely help him get ‘the ear of the president’.

But he is quoted as replying: ‘Are you kidding? Up until now, she’s caused us nothing but problems.’

Paris Match would be ‘letting her go’ next year to avoid any ‘conflict of interest’, he added.

She is also demanding £70,000 in damages over a book that alleges she cheated on her husband with two lovers at once.

Ms Trierweiler was the shared mistress of left-wing President Francois Hollande and a right-wing minister while she was married, the biography called The Troublemaker claimed.

A separate book about Ms Trierweiler called Between Two Fires, by investigative journalist Anna Cabana, describes her ‘a cocktail of jealousy, vengeance and political calculation’.

In a third book about her called The Favourite, journalist Laurent Greilsamer writes: ‘As I see it, you have shown yourself to be not normal, snooty, infatuated, explosive, unpredictable. And visibly dangerous.’

At least 5,000 people according to the organizers, 2300 according to the police, marched Saturday, December 8 in the afternoon Nantes protest against the proposed airport at Notre-Dame-des-Landes, north of the city.

The demonstrators gathered behind a banner head marked “airport = capitalism immediate stop” , before beginning to march, to 15 h 30, the streets of the city center, chanting slogans like “No, No, not at the airport “ , “Vinci emerges resistance and sabotage” , “neither state nor plane, self” or “Ayrault resignation” .

In the procession, which was to go to the prefecture, signs also mentioned “no concrete yes mushroom” , “flights are canceled Vinci” , “Vinci emerges” , “We do not let go” , also found an AFP photographer.

“The procession is impressive, it is about a mile long” , said Dominique Fresneau , Co-Chair ACIPA, the leading association of opponents to the airport.

See portfolio: Notre-Dame-des-Landes transformed into the Sherwood Forest for a day

The event is also part of a European day of action against “harmful projects” .Between 300 and 400 people were also shown against Brest on Saturday morning at the airport, behind five tractors Confédération Paysanne.

The airport project Notre-Dame-des-Landes is intended to replace the existing airport in 2017 from Nantes Atlantique . His concession was entrusted by the State to the Vinci group.

Jean-Marc Ayrault, who was heavily involved in the defense of this project as Mayor of Nantes and continues to do as prime minister, is frequently challenged by anti-airport.

Valérie Trierweiler has received Angers opponents of the projectThe wife of the Head of State, Valérie Trierweiler, received Saturday in Angers, where she was visiting, three representatives of Anjou citizen group against the proposed airport at Notre-Dame-des-Landes, said Greenpeace member of the collective.The three delegates of the collective were originally meet the Chief of Staff of M meTrierweiler but “it is what we received” in a salon where she inaugurated cultural events, told AFP Cocuaud Nicolas, coordinator local group Greenpeace in Angers.“We did not demand” , he added.

Valérie Trierweiler, a native of Angers, “we heard a lot of our claims” against the airport project and “we gave him a copy of the letter now made ​​public by a (female) doctor present on the site at the for the prefect of Loire-Atlantique on all injuries can be serious, inflicted Activists (…) during attacks of 23 and 24 November 2012 “ , said Greenpeace in a statement. “We asked him to give this letter to the Head of State and Government “ , continued the organization. François Hollande’s partner did not, however, committed to deliver.