Birmingham airport’s runway extension was started in November, and is likely to be ready by early 2014. There is now a Birmingham airport consultation on new flight paths, that will be needed for the extended runway. The 3-month consultation has started over new departure routes which would need Civil Aviation Authority approval. The new routes have been designed using the latest  technology that allows aircraft to fly more precisely (a sort of aircraft sat nav). As the runway will be extended further south, there will be a change to the routeing of aircraft after taking-off to the south. This is due to the earliest point that aircraft can turn after departure also moving further to the south, affecting the routeing of aircraft which will mean a change for some communities. There are already some very annoyed residents, who will now suffer a lot more noise. They are not reassured that planes are theoretically a bit less noisy than they used to be, as they are now larger and heavier, and more frequent. No date is given for the end of the consultation, but is is probably around the end of March 2013 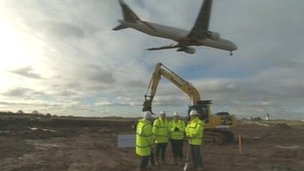 Aircraft would fly closer to some villages under plans to change Birmingham Airport’s flight paths.

A three-month consultation has started over new departure routes which would need Civil Aviation Authority approval.

Aircraft would go further away from Catherine-de-Barnes, Eastcote, Knowle and Meriden, but closer to some parts of Hampton-in-Arden, Barston and Balsall Common, the airport said.

“We’re very annoyed about this proposal and they will be in lots of parts of Balsall Common.

“The planes may be quieter than 30 years ago and they get up higher quicker. But on the other hand you get the big planes taking off and landing.”

Airport public affairs director John Morris said: “As a result of our flight paths being redesigned using the latest criteria, aircraft will be able to fly more precisely on the centre line of a flight path.

“By narrowing the corridor in which aircraft fly, and as more airlines introduce newer aircraft installed with the latest navigational aids, even fewer communities could be over-flown in the future.”

… There is a 3 minute video clip ….
Birmingham Airport is carrying out a series of roadshows in January and February to talk to its neighbours about proposed changes to its flight paths.The Airport is consulting over a three month period on the redesign of its flight paths needed for the opening of its runway extension in early 2014. The new routes have been designed using the latest criteria to allow aircraft to fly more precisely than ever and are a legal requirement set out by the Civil Aviation Authority (CAA).

Currently, aircraft departing from Birmingham are directed to fly within a 3km ‘noise corridor’, up to 3000ft to minimise the noise impact on local communities. However, after redesigning the flight paths using the latest criteria, aircraft will be able to fly more precisely. The Airport has therefore committed to reduce the existing 3km noise corridor to 2km to demonstrate its confidence in the changes.

The new flight paths mean that aircraft will fly further away from Catherine-de-Barnes, Eastcote, Knowle and Meriden, but closer to some parts of Hampton in Arden, Barston and Balsall Common.

John Morris, the Airport’s Public Affairs Director, explained, “As a result of our flight paths being redesigned using the latest criteria, aircraft will be able to fly more precisely on the centre line of a flight path which means that we no longer need such a wide noise corridor. By narrowing the corridor in which aircraft fly, and as more airlines introduce newer aircraft installed with the latest navigational aids, even fewer communities could be over-flown in the future.”

To give local people an opportunity to find out more about the proposed airspace changes, the Airport is holding a series of roadshows in Catherine-de-Barnes, Barston, Eastcote, Meriden, Berkswell, Hampton-in-Arden, Marston Green, Bickenhill, Balsall Common, Knowle and Sheldon. Full details for these roadshows can be found at:www.birminghamairport.co.uk/airspace or by calling 0121 767 7433.

Regardless of the runway extension at Birmingham, all major UK airports will have to redesign their flight paths to the latest design standard in the future due to ground-based navigational aids being withdrawn by circa 2018.

The CAA will make a decision whether or not to approve Birmingham Airport’s new routes once the results of the consultation, together with the Airport’s proposals, have been considered.

Further details can be found here

To inform our stakeholders of the possible changes to their communities, we will be holding a series of local Roadshows, which we would encourage our neighbours to attend to find out more and give the Airport feedback on the proposals.

The Roadshows details can be found by downloading the following document:

You can respond to this consultation in the following ways:

By filling in the airspace consultation feedback form.

Further information relating to the Environmental Assessment is available upon request.