Local campaign group HALE (Hertfordshire Against Luton Expansion) says that Luton Airport’s expansion plans are based on projections to increase flights at night by 50%. This is based on information in the airport’s planning application which shows that the number of take-offs and landings between 11pm and 7am is projected to rise to 52 by 2028, compared to 34 in 2011.  HALE points out that this is just the average figure – during the summer peak there could be as many as 80 flights each night.  There is a public  consultation on the application until 18th February. HALE is urging people to respond to this planning application by demanding that Luton Borough Council forces its Airport to reduce, not increase, night flights; to monitor and fine night arrivals as well as night departures; and to install a noise monitor on the approach to runway 08 for the purpose. Luton airport currently has very lax night noise restrictions.

Local campaign group HALE (Hertfordshire Against Luton Expansion) is claiming that Luton Airport’s expansion plans are based on projections to increase flights at night by 50%.

The claims are based on information in the Airport’s planning application (* see below) which shows that the number of takeoffs and landings between 11pm and 7am is projected to rise to 52 by 2028, compared to 34 in 2011.

HALE points out that this is just the average figure – during the summer peak there could be as many as 80 flights each night.

The data also shows that the main wave of early morning departures would start to ramp up at 5am rather than 6am.

“This is going to come as a very rude awakening to people – in more ways than one” said Tim Moss of HALE. “Just look at the rhetoric of the Master Plan, when the airport was keen to make us believe in its commitment to noise mitigation: they told us how much they wanted the airport to be the best neighbour it could be, and that they would ‘promote measures to minimise noise from aircraft operated at night’. How does that square with a proposal to increase flights at night by 50%, and to start the early morning departures at 5am? At the end of the day this expansion proposal is purely driven by commercial gain, regardless of community pain.”

HALE has also discovered assurances from the Airport to monitor noise levels and fine airlines which exceed noise violation thresholds are almost meaningless at night, because the fines only apply to departures, and yet according to Airport annual reports 72% of flights at night are arrivals.

“Arrivals often make even more noise than departures because although the engines are throttled back, the planes are that much lower” said Andrew Lambourne of HALE. “The commitment to fine night noise offenders is just ludicrous when the noisiest two thirds of night flights are actually being ignored.

“We urge people to respond to this planning application by demanding that Luton Borough Council forces its Airport to reduce, not increase, night flights; to monitor and fine night arrivals as well as night departures; and to install a noise monitor on the approach to runway 08 for the purpose” he added.

For those wanting to comment on the expansion plans, or to object, you can send an email including your name and address to developmentcontrol@luton.gov.uk quoting planning application 12/01400/FUL.

Objections need to be submitted by 18th February.  See www.hale.uk.net for more details and a summary of the expansion proposals.

.
(*) Graphs of the current and proposed hourly arrivals and departures are provided below, taken from the Environmental Statement Appendix H Noise Appendix N(3) accompanying the planning application. Adding up the hourly movements at night between 23:00 and 07:00, the timeframe used for the night noise contours, shows the 50% increase projected by 2028 compared to 2011.

The 250 documents associated with the airport’s planning application can be found at http://www.eplan.luton.gov.uk/plannet/search.asp?authentication=LBC191006-Wg&ID=12/01400/FUL&StartingRecord=141 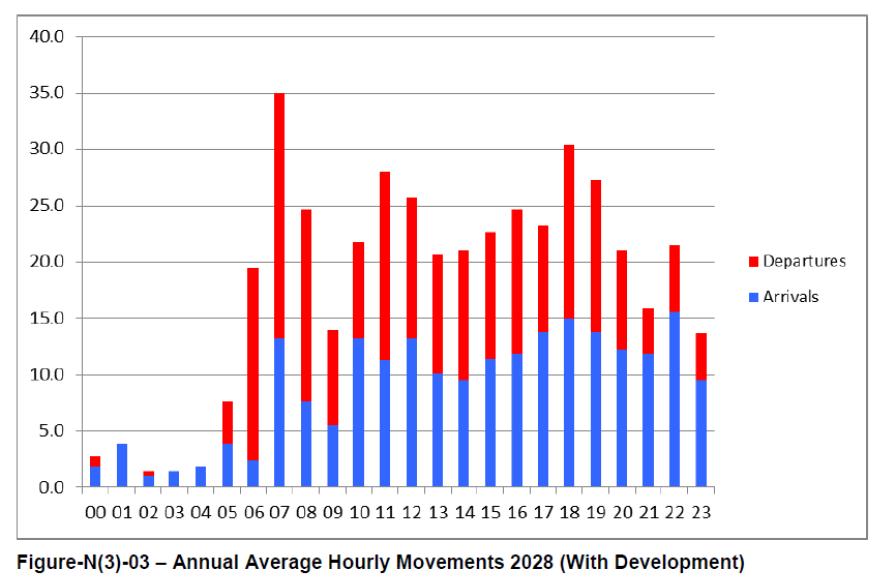 Local people in the Luton area made it very clear  -during the airport’s recent consultations – that night noise was top of the agenda of concern, and the airport Managing Director acknowledged this in a really good interview with the BBC on Sep 14th last year (see http://www.hale.uk.net/theyre-listening/), so it’s almost incredible to discover in the detail of the planning documents the projection that by 2028 flights at night (23:00-07:00) will be up by 50%.

Noise and night-flights are a major problem:

The Council’s Development Control Division has confirmed that the application is now valid and the consultation period can commence on this planning application.

The works proposed in the application are all contained within the existing boundary of the airport and include:

[They should appear on this page. These are the Associated documents ]

The first document to look at is the Summary of the Application (24 pages).

Paper copies of the application will also be made available to view at Luton’s Central and Wigmore libraries, as well as the Town Hall.

The consultation period for the application will run until 18 February 2013 and comments can be submitted:

No date has been set for when the application will be considered by the Council’s Development Control Committee.

The key documents for the communities around the Airport are the 82 making up the Environmental Statement (ES).

graphs showing the percentage of departures from Luton Airport which are noisier than 76dbA, by day and night, from 2005 to 2010:

In 2005 only 8% of departing daytime flights were above 76dbA – by 2010 this had doubledto around 16%. At night, 10% were louder than 76dbA but this had doubled to 20% in 2010. These figures clearly show that the flights are getting noisier over time – and the raw data has been available in the public domain for years. Did they miss it?

Why the additional noise? The airport are struggling to explain it. We believe it’s caused by the changing mix to larger, heavier aircraft, plus the fact that the flights are going further so are carrying more fuel. The effect of this is completely the opposite to what futureLuToN had said. “As passenger numbers increase”, Steve Heappey said, ”bigger planes will be used so that double the passengers does not mean double the flights.” But the last 5 years have shown that bigger planes mean more noise, hence they are completely misleading us by claiming that the aircraft will be quieter.

The annual noise figures for departing flights from Luton Airport can be found here: Annual Reports 2005-2010. You can add up the number of flights that are louder than a chosen value and calculate the percentage of the total. To save you the trouble you can download the results here: Luton Airport Noise Trends. These graphs will show you the real trend behind their tables of data.

Noise from aircraft is particularly and can have significant impacts on health: see our page dedicated to night noise at Luton.

In contrast with the main airports in the south east of England and a number of major airports in Europe, no controls are imposed on night flying at Luton. Heathrow, for example, has no scheduled departures between 23:30 and 06:00, an indirect result of controls imposed by Government.

Luton Airport’s voluntary Night Noise Policy comprises only measures which are calculated to prevent a massive worsening of the noise disturbance currently suffered by local residents but which barely affect current operations.

The controls on average night noise (23:00 to 07:00) imposed by the 1997 planning permission will not be triggered unless the hourly number of flights at night reaches 80% of the daytime rate, an intolerable situation and, in effect, no limit at all.

The key problem at Luton

The fundamental problem with Luton Airport is that it is located very close to south Luton. At night, this means that a large number of people experience high levels of aircraft noise which are likely to interrupt or disturb their sleep.

Based on a wide range of scientific studies, the 2009 World Health Organisation (WHO) guidelines for night noise propose that, to protect the public, outside noise should not exceed 40 dBA Lnight.

This is a very demanding target so the WHO recommends that governments mandate a limit of 55 dBA Lnight as an Interim Target while planning to meet the more demanding Protection Level. Much of the research which underlies the WHO guidelines indicated that the number of noise events is a key determinant of sleep disturbance.

The recommendations are based on an assumption that there are 8 noise events each night. Other research findings suggest that a doubling of the number of events is equivalent to an increase of 10 dBA Lnight so, at very busy airports, the limits should be lower.

LADACAN believes that urgent action is needed to curb night noise around the Airport principally to protect the large population in south Luton which is subject to very high noise levels. This action must be based initially on achieving the WHO Interim Target.