London Luton Airport Operations Ltd submitted its planning application to expand the airport, to the local authority (which is also the airport’s owner) Luton Borough Council, on  7th January. The deadline for comment is the 18th February. Luton Airport released its assessment of the recent Master Plan consultation, in which is gave the impression that some 65% of those consulted were in favour of the airport expansion. In reality, 612 votes were from airport employees, airlines, airport union members and businesses associated with the airport who, unsurprisingly, were 100% in favour of expansion. Only 450 responses came from the public, and those were 73% opposed.  There were 94 from responses that were undecided. The fact that 29 of the 47 responses from stakeholder organisations, a group which included local councils, were ‘undecided’ indicated that the plans “didn’t have enough information” as the master plan did not include an environmental statement or details of where the aircraft would be flying. It simply proposed they would be doubling the capacity of the airport from about 9.5 million passengers and increase the number of flights by 60%. 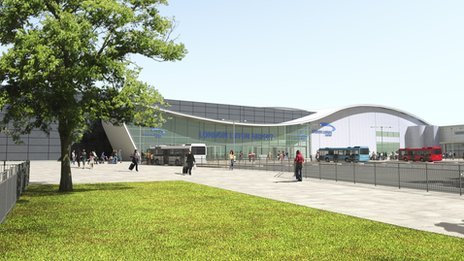 But Andrew Lambourne, of Hertfordshire Against Luton Expansion (HALE), said most of the responses came from people associated with the airport.

“The general public, who will be most affected, were 73% against”, he said.

Mr Lambourne, who lives about six miles away from the airport in Flamstead, said a breakdown of the responses showed only 450 came from the public.

“What they also included was 612 votes from airport employees, airlines, airport union members and businesses associated with the airport,” Mr Lambourne claimed.

“Unsurprisingly they were 100% for expansion of the airport.”

The concerns are that plans to increase the capacity from about 9.5 million passengers a year would create too much traffic and noise, significantly damaging residents’ “quality of life”.

Mr Lambourne said the airport’s promise of reduced night-time flights and a fining system for aircraft which breached noise limits, offered as a response to the consultation, was “spin”.

Noise levels at night would still rise, he said, and the number of flights deterred by the noise restrictions would be insignificant to the “160 extra flights a day” gained by the expansion.

“If you take the spin at face value you might think it’s something good;  it’s not,” he said.

Mr Lambourne said the fact that 29 of the 47 responses from stakeholder organisations, a group which included local councils, were ‘undecided’ proved that the plans “didn’t have enough information”.

“The master plan didn’t include an environmental statement or details of where the aircraft would be flying. It simply proposed they would be doubling the capacity of the airport from about 9.5 million passengers and increase the number of flights by 60%.

“What they didn’t say was what’s the environmental impact, the impact on roads and rail services and where the aircraft would be going, so you would know where the burden of noise will fall.”

LLAOL said the expansion, which would be carried out in three phases up until 2028, could create up to 5,100 jobs.

Luton Borough Council is carrying out its own consultation, until 18 February.

The Council’s Development Control Division has today confirmed that the application is now valid and the consultation period can commence on this planning application.

The works proposed in the application are all contained within the existing boundary of the airport and include:

[They should appear on this page. These are the Associated documents ]

Paper copies of the application will also be made available to view at Luton’s Central and Wigmore libraries, as well as the Town Hall.

The consultation period for the application will run until 18 February 2013 and comments can be submitted:

No date has been set for when the application will be considered by the Council’s Development Control Committee.

The airport does not attempt to make it easy to understand the application.

There are 250 documents in total.

This Summary of the Application (24 pages) sets out the basic information. Below are a few items from the Summary:

For anyone currently troubled by noise from Luton airport, the vague and general proposals on Page 18 may give little reassurance.

The work being proposed at Luton Airport is focused primarily on removing the bottlenecks which affect throughput of passengers and planes at peak times. By dualling the access roads and increasing the security check lanes, passengers can arrive and be processed more quickly. By extending the taxiways and adding more piers, planes can be filled up can get into position for takeoff more quickly. And by adding more customs and baggage reclaim facilities, arriving passengers can be moved more rapidly through the terminal.

All of these measures, coupled with the expected trend to larger planes, will mean that the passenger capacity of the airport will increase significantly. By definition, any planning application which increases the capacity of an airport by more than 10 million passengers per annum constitutes a Nationally Significant Infrastructure Project, and must be referred to the Secretary State for determination.

In Luton’s case, a detailed throughput report was produced last year by consultants Leigh Fisher, and based on these figures and on the proposed works, it’s not difficult to show that the removal of the bottlenecks would increase capacity by more than 10 million passengers per year, in which case the planning application should not have been submitted to Luton Borough Council but to the Planning Inspectorate overseen by Eric Pickles.