Al Jazeera reports that for the past several months, the French forest of Rohanne has been a battlefield as riot police and protesters from all over Europe have faced each other over a plan to cut down centuries-old trees and build a massive airport. Local residents and environmentalists seeking to protect the forest have set up vinyl tents, wooden huts, camper vans, and even tree houses to impede the airport’s construction. Some have brought families and lived in commune-style conditions. In November between 13,500-40,000 people arrived at the site to protest against the planned airport. A few hundred protesters remain at the site. A court ruled in December that French police could forcibly remove squatters from camps in the Rohanne. A judge’s ruling has postponed airport construction until June 2013 to allow a review to be completed. Dialogue between the two sides to end the stand-off is necessary, but that will not happen unless riot police are ordered to stand down.  There is lots more detail. 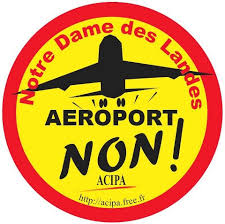 For the past several months, the French forest of Rohanne has been a battlefield as riot police and protesters from all over Europe have squared off over a plan to knock down centuries-old trees and build a massive airport.

Local residents and environmentalists seeking to protect the forest have set up vinyl tents, wooden huts, camper vans, and even treehouses to impede the airport’s construction. Some have brought families and lived in commune-style conditions; others have been involved in activism against the airport since it was first planned in the 1960s.

The Notre-Dame-des-Landes airport project near Nantes – France’s sixth-largest city – was scheduled to start in January. But a judge’s ruling has now postponed construction until June 2013 to allow a review to be completed.Envisioned is a 580m euro ($775m) airport to open in 2015 that will handle nine million passengers annually by 2050.

Proponents say it’s necessary because of increased passenger congestion at the current airport in Nantes. The Notre-Dame-des-Landes would also create many new jobs, they say.

“The law has to be respected and it’s not acceptable that people unlawfully occupy lands that do not belong to them.”

In October, the French government responded to the protesters by deploying 500 riot police to raze their settlements, tear-gas demonstrators, and haul the squatters away. Protesters claimed hundreds were injured. The following month, somewhere between 13,500-40,000 people arrived at the site to protest against the planned airport.

A court ruled in December that French police could forcibly remove squatters from camps in the Rohanne. Fabrice Roussel, federal secretary of Socialist Party in Loire-Atlantique region, said the court’s decision was a legitimate one.

“Why should anyone be surprised to see the police force intervening to ensure a court decision has been respected?” said Roussel. “Anyone is free to oppose this project [but] that being said, the law has to be respected and it’s not acceptable that people unlawfully occupy lands that do not belong to them.”

Today, a few hundred protesters remain at the site. They want to know why the government intends to push people from their land and destroy 1,600 hectares of ancient forest for an airport, when Nantes already boasts one.

The movement seems to have gained popularity among the French as a symbol of resistance to environmental degradation throughout the country.

“On a national level it’s hard to tell how firmly opposed people are,” said Erwann Lecoeur, a sociologist. “If there was a referendum today I am not sure what the outcomes would be. Yet this protest has obtained so much attention because the project appears anachronistic. In times when we talk quite a lot about the environment and preserving the planet, it sounds out of place to build a massive airport when it’s not entirely sure whether there will be any demand.”

The battle over the vast tract of forest is not a new one. Notre-Dame-des-Landes airport was first proposed in the early 1960s. It was abandoned but re-launched several times before being eventually finalised in February 2008.

The airport project is fully backed by the Socialist Party-led government, in particular by Prime Minister Jean-Marc Ayrault, the former mayor of Nantes.

“While it has not shifted the results of the local elections, you can tell from that Notre-Dame-des-Landes had an impact. The Green Party and the MoDem [The Democratic Movement, a centrist party], which have both opposed the project, obtained more votes in the region that in the rest of the country,” said Gérard Brovelli, a professor of administrative law at the University of Nantes. “On a national level, most of the ministers have expressed their concerns about this local matter that is perceived as yet another obstacle the government has to deal with. Jean-Marc Ayrault is thus left alone to defend this project.”

Jean-Philippe Magnen, a member of the Green Party, which supports the protest, said dialogue between the two sides to end the stand-off is necessary, but that will not happen unless riot police are ordered to stand down.

“Seventy police buses arrived on the site and the violence started. The fight against Notre-Dame-des-Landes should not be reduced to that,” Magnen said. Since then, homeowners and farmers in Rohanne have been forcibly evicted, while others have left because of the planned construction.

Notre-Dame-des-Landes struggle is comprised of a coalition of farmers, environmentalists and anti-globalisation crusaders who have come together in a common cause. “Quite a few arrived in the last few months. They mostly tend to be alter-globalists who joined the movement,” said Magnen.

Some farmers arrived at a protest on October 30 driving tractors to prevent excavators from destroying the squatter camps.

“The government, on the other hand, does not perceive farming as an industry worth protecting.”

Julien Durand is a retired farmer and the spokesman for the Acipa, an organisation that opposes the Notre-Dame-des-Landes airport. He has been fighting since the 1960s against the project and welcomes the new wave of opponents.

“When you see the people who have come to join the fight, you realise the gap between the politicians and the real people. The real people know that farming is an activity worth protecting: they understand the need to have local, healthy product near them and a sustainable way of living. The government, on the other hand, does not perceive farming as an industry worth protecting,” he said.

One of the problems plaguing the movement is a lack of cash. A farmer’s union launched an innovative approach to help the cause: locally producing organic beer and selling it for 2 euros ($2.67) a bottle. All proceeds will go to Acipa.

Protesters have come up with creative ways to advertise their cause to a wider audience, such as launching Radio Klaxon to create and release podcasts online. And a music festival benefiting the protesters gathered around 30,000 people to the site on the first weekend of January 2013.

The forest fight could have wider political ramifications for the socialist government of President Francois Hollande.

Prime Minister Ayrault agreed to postpone construction and establish a government committee to hold talks with both sides. A final report will be published in March.

But it remains to be seen how the six-month hiatus and committee will bring about an agreement: the demonstrators say the entire plan must be scrapped, while government spokeswoman Najat Vallaud-Belkacem has said there is “no way to overturn the airport project”.

While a heavy police presence remains at the site, the situation has quieted down since violence flared in early December.

While protecting the environment is at the core of the debate, some opponents also say the plan’s economics do not add up. “It’s a matter of common sense,” said the Green Party’s Magnen. “People are not going to travel around the world from Nantes. It does not make sense to build airports like in Paris, Amsterdam and Frankfurt.”

Opponents say the current Nantes airport could be revitalised to handle increasing passenger traffic, a move that would cost significantly less, save the Rohanne forest and famers’ fields.

Durand, the farmer, said the group hopes the economic argument will eventually put an end to the project. “We want Notre-Dame-des-Landes airport to be discussed by the commission that the government will start in January, which is meant to reconsider all the public projects in light of the economical crisis. In the 60s we started having this feeling that the government did not care about rural lands. Our space was shrinking as they built industrial facilities. Today, this feeling has been confirmed: there is hardly any land left.”

Acipa have organised a photo petition protest against the airport. See