Abertis, the Spanish owner of Luton, Cardiff and Belfast International airports, may sell them. According to The Sunday Times, Abertis has decided to sell the 3 airports as part of a review of its €1 billion transport division, and Citi and AZ Capital have been appointed to review the division. Luton airport has been surrounded by controversy over its development plans with the local council opposing Abertis’ plans for its development. The Welsh government is reported to be on the verge of buying Cardiff airport, which has had a large drop in traffic during the past few years. Albertis’ airport assets in Bolivia were nationalised by President Evo Morales last week, and it has lost money in Spain in recent years.  Campaigners at Luton said the timing of the sale was unfortunate, with the airport’s current planning application – for which planning permission has not been secured. The sale threatens the investment on which the airport’s hugely expensive expansion plans are based.


Luton airport operations “up for sale”

Abertis has asked Citigroup and AZ Capital to study options for its airports business, and is reportedly ”open to any option”, which could mean that part or all of the portfolio is sold. Abertis owns Cardiff and Belfast airports, though its interest in Luton is only in the operating concession, since the airport itself is owned by Luton Borough Council.

Andrew Lambourne of HALE said: “In terms of Luton Airport expansion the timing of this news couldn’t be worse, since it clearly threatens the investment on which their hugely expensive expansion plans are based. The airport has not yet secured its planning permission – and given the significant grounds for objection which range from apparent contravention of the local planning permissions and noise restrictions to huge concerns over public health and safety plus the unmodelled impacts on local road and rail infrastructure, this is not going to be an easy ride. And of course there is still uncertainty over whether the application is going to be called in, as it should be, for proper consideration as a national infrastructure project.
“In a climate where many business are consolidating rather than taking risks, particularly in an airport business so dependent on the future price of oil and on decisions by airlines who will be shopping around for the cheapest landing fees, a postponement of the planning application may well be in the best interests of Luton. The last thing Luton Borough Council would want is for them to overstretch and then go bust.”
Last year the Council initially announced that it would be terminating the operating concession and looking for a new operator prepared to invest in growth. The signs are that the hesitancy of LLAOL/Abertis to invest was based on the uncertainty over whether Abertis would continue to see value in its airport portfolio.

Spanish owner of Cardiff, Belfast and contract to run Luton considers selling UK assets in effort to drive down its debt 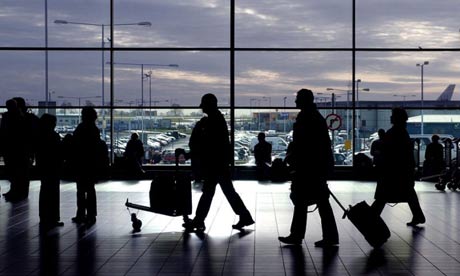 Luton airport is owned by the local council but operated by Abertis on a 30-year lease. Photograph: Kirsty Wigglesworth/PA

Three UK airports could change hands this year as part of a major review by their Spanish owners.

Cardiff airport is expected to be bought by the Welsh government next month, while Belfast airport and the contract to run Luton airport may also be sold.

Abertis, the company that owns the airports as part of a portfolio of 29 worldwide, is looking to pay down its €14.1bn (£12.2bn) debt pile by offloading its UK assets.

Bosses have already been negotiating with the Welsh government for the past three months over the sale of Cardiff airport and politicians are expected to make an offer in the next few weeks.

A spokesman for Abertis said: “We are conducting a review of all our airport businesses to see if a sale is possible. All options are open, including the sale of our UK airports.”

The company, which is the world’s largest toll road operator, has appointed Citi and AZ Capital to explore its options of selling off some non-core assets. Airports made up 8% of the group’s €4bn revenues in 2012.

The recent sales of Stansted and Edinburgh airports by Heathrow Airport Holdings for a combined £2.3bn are expected to be scrutinised by Abertis because both were sold for more than expected.

Last year Luton council, the owner of Luton airport which is run by Abertis on a 30-year lease and could be sold, threatened to scrap the contract unless the Barcelona-based company pledged to expand the airport.

That led to a £100m upgrade being agreed in August, with the hope of doubling passenger numbers to 18m a year.

Cardiff Airport has struggled in recent years, with passenger numbers halving in five years to 1 million. The Welsh government is planning to buy the airport for around £50m and is understood to have been conducting due diligence since November last year.

Belfast International has more than 4 million passengers and was purchased by Abertis in 1996 for £72m.

* Plans expansion in Mexico and U.S.

Abertis, which also controls toll road and telecoms assets, has hired Citigroup and AZ Capital to study options for the business, valued by analysts at about 900 million euros ($1.2 billion).

“We’re open to any option,” Reynes told Reuters in a telephone interview, while adding that the company would continue to study growth opportunities in Mexico and the United States without ruling out further investments in Spain.

The company’s airport assets in Bolivia were nationalised by President Evo Morales on Monday, though Abertis said that the widely expected move had no impact on its results.

The company has suffered from its exposure to Spain, where a deep recession and high unemployment have weighed on traffic and propelled its drive for international expansion.

Last year it bought highway concessions in Chile and Brazil from Spain’s OHL, with 60 percent of EBITDA now generated outside Spain.

The company runs 6,713 kilometres of motorways in Europe and operates more than a dozen airports in cities including London, Stockholm and Orlando. Abertis manages toll roads and parking garages, is owner of various television and radio transmission networks as well as of the concessionaire of London Luton Airport. (Wikipedia)