The Welsh Government is expected to complete its acquisition of Cardiff Airport next month in a deal understood to be around £50m with current owner Abertis.

A due diligence process is being undertaken by a team of advisers on behalf of the Welsh Government that includes law firm Eversheds and professional advisory firm KPMG – using personnel at the firms’ respective Cardiff offices.

It is understood that it will be a straight cash deal, with no earn-outs for listed Spanish infrastructure group Abertis.

Earn out clauses could have seen Abertis being entitled, for example, to payments based on the future performance of the airport – such as reaching an annual passenger number of three million a year (it is currently languishing at around one million).

The deal will not see the Welsh Government taking on any debt at the airport – which posted pre-tax losses of just over £300,000 in 2011.

The Welsh Government is keen to conclude a deal before the end of its current financial year at the ends of March.

In the short to medium term the Welsh Government would need to inject about £6m a year in capital expenditure and airline route development support – including agreeing to underwrite any losses in the first few years accrued by airlines establishing new routes out of Cardiff.

It is understood that representatives of the Welsh Government have already sounded out a number of low cost airlines over setting up operations at the airport post deal, including Ryanair.

However, Ryanair’s wish list of support is understood to have been too high for the Welsh Government – although discussions are continuing.

It is unlikely that the airport, post deal, would be an asset directly owned by the Welsh Government. It has been looking at establishing a special purpose vehicle to acquire the asset.

However, one option could be for it for it to come under the ownership of the Welsh Government’s banking subsidiary Finance Wales.

Such a move could potentially provide a financial bonus in that its enterprise value on Finance Wales’ balance sheet, could offset what was originally £97m charged to the Welsh Government’s accounts as result of its [Finance Wales’] £150m Jeremie Fund – which includes £75m of repayable finance with interest with the European Investment Bank.

As a result the amount was charged against the capital budget of the Department for Business, Enterprise, Technology and Science (Bets).

The published Welsh Government accounts for its last financial year show that Finance Wales borrowings had reduced to £73.9m. Further repayments of £15.5m are planned for 2012-13 as reflected in the second supplementary budget for this financial year.

If Cardiff Airport appeared on the balance sheet of Finance Wales, could its enterprise value effectively release all or part of the charge of £73.9m – which will be less than £60m at year end at the end of next month – from the capital budget?

With some 40 acres of land around the airport its enterprise value over time should be significantly higher than the amount it pays Abertis.

However, it would need Treasury approval. The Welsh Government and Finance Wales had unsuccessfully argued that the funding should not ever have been allocated as a charge on the Welsh Government’s balance sheet as the money was only intended to be lent to be invested in businesses, for which there is an element of security. It is unlikely that the Treasury would take a favourable view now on the enterprise value of the airport of the balance sheet of Finance Wales offsetting the charge allocated to the capital budget of BETS.

It could also argue that as Finance Wales is a wholly- owned subsidiary of the Welsh Government it would therefore have ultimate ownership of the airport.

Moreover, the Welsh Government has enough financial fire-power to use money from exiting funding resources – including making use of the £227m capital consequential as a result of George Osborne’s Autumn Statement – to pay for the airport.

A Welsh Government spokesman said: “The Welsh Government has appointed a core team of specialist advisers and contractors, which includes KPMG and Eversheds, to assist us through the period of due diligence. As we have said repeatedly, it would not be appropriate to make any further comments on the proposed purchase while we undertake that due diligence work.”

Having acquired the airport, the Welsh Government would put out to tender a contract for a company to run the airport.

This could potentially see the operator – having committed to capital investment at the airport – taking a minority equity stake in a public-private partnership ownership arrangement with the Welsh Government.

Cardiff Airport first moved into the private sector when it was acquired by TBI from the local authorities of West, Mid and South Glamorgan in 1995 for £37.65m.

The First Minister of Wales, Carwyn Jones, has said the Welsh government is close to signing a deal to buy Cardiff Airport from its current owners, Abertis.   He has told Welsh Assembly Members that checks on the airport’s finances had revealed “no concerns” though some experts had told him its commercial future as an airport was limited to a few years.  The deal would be subject to a final price being agreed and  due diligence being carried out on the finances of the airport. Cardiff had just over one million passengers in 2012, which is a drop of some 16% compared to 2011, which was itself some 14% lower than in 2010. The airport had two million passengers in 2007, and has been in decline ever since.  It has hopes of growing its passenger number by 5 – 8% this year, which appears unlikely with a continuing recession.  Ministers are considering a range of options on how to run the airport.  Assembly Members are concerned the airport does not become a drain on taxpayers. 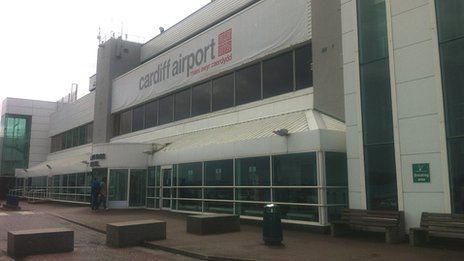 The Welsh government is close to signing a deal to buy Cardiff Airport with the two sides “not too far apart” on a price, the first minister says.

Carwyn Jones told AMs that checks on the airport’s finances had revealed “no concerns” though some experts had told him its commercial future was limited.

Ministers are considering a range of options on how to run the airport.

The airport was hit by the withdrawal of flights by budget airline bmibaby in 2011, but says it expects 5% – 8% growth during 2013.

Just before Christmas, the Welsh government confirmed it wanted to buy Cardiff Airport from the Spanish-owned Abertis group after a slump in passenger numbers from a peak of two million in 2007.

In an update on negotiations on Wednesday, Mr Jones said a deal would be subject to a final price being agreed and various checks and balances being carried out on the finances of the airport, in a process called due diligence.

AMs on the assembly’s business and enterprise committee were given more details about the talks that went on behind the scenes and what is likely to happen if the deal goes ahead.

Mr Jones told them: “We are not going to purchase something that is going to cause a problem to the people of Wales and in looking at the due diligence it appears that there are no major problems with the airport.”

He also revealed that no final price had been confirmed with the current owners except to say that the two sides were “not too far apart”.

The first minister set out a broad timetable of events should the deal be completed.

He said an interim team would be installed to run the airport while the Welsh government considered the best model for its ownership and operation.

The options include leasing it to a private company or entering into some kind of joint venture, possibly even shared ownership.

Once a decision is made on the model, a tendering process would get underway to choose a private sector operator to run the airport on a day-to-day basis.

Mr Jones said the current owners were not interested in a sale at first but changed their minds and approached the Welsh government a month or two before the pre-Christmas announcement.

He also said his initial priority would be getting new routes in and out of the airport, adding that during talks with the airlines they had shown no interest in the quality of road and rail links to the airport.

The first minister was also pressed on his claim that the proposed deal was being done as a way to secure the future of the airport.

In his response, Mr Jones said in talks with the airport owners he was left with the impression that it was in trouble.

He also said that several different sources, including aviation experts, had told him they believed the airport only had a few years left as a commercial operation.

February 16, 2013      Provisional figures for 2012 indicate that more passengers from Wales use Bristol Airport than Cardiff. Over 1 million passengers used Cardiff in 2012, down about 200,000 in a year, with nearly 6 million at Bristol. The statistics suggest the scale of the task facing the Welsh government in improving Cardiff Airport’s fortunes as ministers finalise a deal to buy it. It is estimated that it amounts to the equivalent of about 1.1m passengers over a year flying from Bristol, having come from or going to places in Wales. The Welsh government is expected to take over Cardiff Airport over the next few months after a slump in passenger numbers from a peak of 2m in 2007. It is negotiating a price with Spanish owners Abertis and carrying out various checks and balances on the airport’s finances. The Mayor of Bristol says both airports have their problems, and it would be better if they could work together.    Click here to view full story…

January 10, 2013     On 18th December the Welsh First Minister, Carwyn Jones announced that the Welsh government wanted to buy Cardiff Airport from its current owners, TBI. He said they would be working towards a purchase over the next few months. and hoped the airport would be run on a commercial basis by an independent commercial operator on behalf of the government. Conservatives are calling on the Welsh government to prove that buying Cardiff Airport would be good value for the taxpayer, and see it as Labour’s attempt to “nationalise” the airport. Cardiff airport has had declining passenger numbers, down 13% in 2011 to a little over 1.2m, while passengers at Bristol increased by 1%. There was a further fall in the first half of 2012 to 440,000 from 558,000 – partly due to the departure of bmibaby. Despite assurances that it will not receive subsidies or burden the taxpayer, there have been questions about whether public ownership will succeed in turning around the airport’s fortunes.     Click here to view full story…