Heathrow Airport has  produced its business plan for Q6 (which is the 6th period of 5 years, from April 2014 -2019). It plans to spend some £3 billion on infrastructure, like work on Terminal 2.  As Heathrow and the CAA over-estimated the number of passengers using Heathrow over the past 3  years, their income  has been lower. Therefore Heathrow plans to raise its landing charges per passenger, by as much as 30 -40% by 2019 – much more than inflation.  It said its prices “inevitably” had to rise in order to ensure a “fair return” to its investors. The CAA will publish its final decision on whether it has approved Heathrow’s proposals in January 2014.  Launching the investment plans,  Colin Matthews said the airport envisaged passenger numbers increasing from just under 70m now to around 72.6m by 2018-19.  Heathrow’s 5-year plan is separate from any decision on whether a 3rd runway is built.  Maximum airport charges allowed by the CAA are calculated using a complex formula taking into account the total value of Heathrow’s assets, return on capital invested and forecast number of passengers.


Heathrow’s full business plan for Q6 (the 5 years from April 2014 to March 2019 is at http://www.heathrowairport.com/static/HeathrowAboutUs/Downloads/PDF/Q6_Heathrow_Full_Business_Plan.pdf

Heathrow today announced £3 billion of investment in Heathrow airport in addition to the £11bn that has been invested since 2003.

The announcement forms part of the airport’s business plan for ‘Q6’ – the regulatory period which covers 2014-2019 – and it represents one of the largest private-sector investments in UK infrastructure.

The plans include the completion of Terminal 2 and the early works on extending the building; the development of a new integrated baggage system; and the construction of new taxiways and stands which will allow Heathrow to accommodate more of the most modern aircraft.

Heathrow is the UK’s only hub airport, accounting for 78% of all long-haul flights from the UK. Every five years the Civil Aviation Authority (CAA) scrutinises the airport’s capital expenditure plans, operating costs and commercial revenues to set the maximum amount the airport is permitted to charge airlines over the coming period. The publication of the airport’s business plan for 2014-2019 serves as an input to the CAA’s decision.

Like much UK infrastructure Heathrow historically suffered from out-dated facilities and decades of under-investment. Since 2003, Heathrow has invested £11 billion in the airport – one of the UK’s largest private sector investments. Investment includes the construction of Terminal 5, a new Terminal 2 due to open in 2014, new baggage tunnels, and the refurbishment of Terminals 3 & 4.

Operational performance has improved and passengers say they notice the difference. The proportion of passengers rating their journey as ‘very good’ or ‘excellent’ has increased from 48% in 2007 to 72% today. The airport has moved from the bottom to the top quartile of EU airports for passenger satisfaction, and in 2012 Terminal 5 was voted the world’s best airport terminal.

“Heathrow is the UK’s only hub airport and a strategically important national infrastructure asset. Heathrow faces stiff competition from other European hubs and we must continue to improve the service we offers passengers and airlines. We have invested billions of pounds in new facilities such as Terminal 5 in recent years and passengers say they have noticed the difference. Our plan for a further £3 billion of private-sector investment will further improve the airport for passengers. The plan represents good value for money for airlines and passengers and comes at no cost to taxpayers.”

Heathrow’s business plan also needs to deliver a fair return to shareholders to encourage future investment in the UK. Over the Q5 regulatory period passenger numbers have fallen 10% below the level anticipated by the CAA, resulting in Heathrow receiving around £650 million less than the allowed return from aeronautical charges. Heathrow cannot recover this cost now or in future. Correcting the passenger forecast for Q6 inevitably results in increased prices.

Our Q6 plan includes a capital investment programme of £3 billion, a tariff increase of RPI +5.9% and an average maximum allowable charge per passenger of £24.56 over Q6. The detailed figures in Heathrow’s full business plan are set out below. 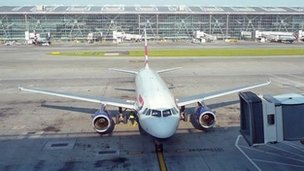 Heathrow forecasts it will serve around 72.6 million passengers by 2018-19.

Passengers using Heathrow could face a rise in ticket prices if a £3bn five-year investment plan proposed by airport bosses is approved.

Heathrow wants regulators to allow it to increase charges for airlines to use the airport, between 2014 and 2019.

The charges need to be approved by the Civil Aviation Authority (CAA),

Virgin Atlantic described the proposed price rise as “incredibly steep” and British Airways said it hoped it would not “penalise customers”.

The CAA will publish its final decision on whether it has approved Heathrow’s proposals in January 2014.

Heathrow said the increased charges would pay for investment including the opening of the new Terminal 2 in 2014 and improved check-in and baggage facilities.

Launching the investment plans, Heathrow chief Colin Matthews said the airport envisaged passenger numbers increasing from just under 70m now to around 72.6m by 2018-19.   [This contrasts with the January 2013 forecasts by the DfT for 75 million passengers using Heathrow by 2020.   See link ].

But he admitted Heathrow, airlines and the CAA had all got their passenger forecasts wrong for the period 2009 to 2014.

He said the CAA issued its ruling on the charges Heathrow could impose on airlines for that period, on the basis of the west London airport handling 78m passengers a year by 2013, more than 8m out.

Mr Matthews said this miscalculation had resulted in Heathrow receiving around £650m less money over the last five years.

“Heathrow faces stiff competition from other European hubs and we must continue to improve the service we offer passengers and airlines,” Mr Matthews added.

Heathrow’s five-year plan is separate from any decision on whether a third Heathrow runway – currently ruled out by the coalition government – is built.

The Davies Commission set up by the government to look at aviation strategy is not due to publish a final report until summer 2015, which will be after the next general election.

Virgin Atlantic said: “We are totally committed to improving the passenger experience at Heathrow.

“However, we believe this can be done without a repeat of the incredibly steep price rises we have seen in airport charges in the last few years.

British Airways said: “We hope the regulator (the CAA) will give a fair ruling in the months ahead, which doesn’t penalise customers and airlines.”

Heathrow will seek to complete and open the first phase of Terminal 2 by 2014, enabling it to close Terminal 1. But Heathrow Airport has confirmed it is delaying the construction of the £2.5bn 2nd phase of its Terminal 2 building in its latest 5 year business plan (Q6). This means building work starting at the end of the 2014 – 2019 period. The business plan says Heathrow does not now expect to complete the project until “late in Q7” – meaning it could be as late as 2024 before the building is complete. In 2010 BAA said the building, which will add capacity for a further 10 million passengers a year, would be complete by 2019. Heathrow Airport still expects to spend £3bn over the Q6 period, with investment reducing year on year over the period, from £660m in 2014/15 to £464m in 2018/19. “The next quinquennium at BAA will largely be about asset replacement rather than major new projects.” Launching the investment plans, Colin Matthews said Heathrow envisaged passenger numbers increasing from just under 70m now to around 72.6m by 2018-19 (compared with DfT forecasts of 75m by 2020 – see below). So no rapid need for space for 10 million more passengers.

Heathrow is at loggerheads with the major airlines after proposing to increase landing charges almost 6pc above the rate of inflation from next year.

British Airways, Lufthansa and Virgin Atlantic attacked the price increases, which could see landing costs jump from £19.33 per passenger at present to £27.30 by 2018.

The changes were announced as part of Heathrow’s business plan for the five-year period between 2014 and 2019.

The airport company said it intends to spend £3bn improving Britain’s only hub airport, marking one of the largest private sector investments in UK infrastructure.

Included in the £3bn investment will be some “start-up costs” for a new Terminal 2 building, due to open next year, and upgrades such as more self-service check-in kiosks and bag-drop facilities.

The group has also contributed £100m towards the Crossrail project, which will connect Heathrow to the City of London and Canary Wharf.

Heathrow, whose landing fees are regulated by the Civil Aviation Authority (CAA), said prices “inevitably” had to rise in order to ensure a “fair return” to its investors.

Maximum airport charges are calculated using a complex formula which takes into account factors such as the total value of Heathrow’s assets, return on capital invested and the number of passengers forecast by the CAA to pass through the airport’s doors over five years.

Colin Matthews, chief executive of Heathrow, said the regulator had “dramatically overestimated” the growth in passenger numbers between 2008-2013, resulting in income £650m lower than anticipated.

Passenger figures had been forecast to hit 78.2m but Heathrow has fallen more than 8m short of that target as fewer airlines than expected swapped their short-haul routes out of the airport for long-haul destinations served by larger planes.

Heathrow said investor returns in the past five years have, therefore, been “poor and unsustainable” and it has proposed to the CAA an increase in airport charges of 5.9pc on top of the retail prices index measure of inflation.

Mr Matthews denied any of the £3bn upgrades were in anticipation that the Government-backed Davies Commission on aviation would allow a third runway at Heathrow, though he conceded many of the changes would be “useful” for further expansion.

Both British Airways and Virgin Atlantic called on the CAA to force a cut in Heathrow’s charges at a time when airlines are having to slash budgets. Charges at Heathrow have tripled over the past decade, the airlines argued, making it the most expensive hub airport in the world.

Steve Griffiths, chief operating officer of Virgin Atlantic, said: “Virgin Atlantic is totally committed to improving the passenger experience at Heathrow. However, we believe this can be done without a repeat of the incredibly steep price rises we have seen in airport charges in the last few years.”

A BA spokesman pointed out Heathrow was proposing to cut its level of investment by a quarter from 2014. “The charges must be reduced significantly over the coming years,” he said. “We hope the regulator will give a fair ruling in the months ahead, which doesn’t penalise customers and airlines.”

Lufthansa said in a statement: “In the highly interdependent system partnership of airports and airlines, it is essential that airport operators take into account the business concepts and the economic capacities of their principle clients.

“An annual increase of the magnitude mentioned would clearly violate this logic and challenge the route economics of many airlines operating to London Heathrow airport, especially those, which operate high frequency services.”

Heathrow’s plans will be reviewed by the CAA, which will publish in April its own proposals for the maximum charges the airport should be allowed to impose.

Meanwhile, London Mayor Boris Johnson, who has ordered feasibility studies on creating an alternative hub airport to Heathrow, on Monday told the Commons Transport Select Committee that Britain had “an historic choice to make – does it continue to compound a mistake – the siting of Heathrow – or go forward with a better, long-term, suitable alternative?”

Heathrow could expect to receive a 15-year notice period before it would be forced to close, the Mayor’s aviation adviser, Daniel Moylan added.