Gatwick Airport has brought in Fishburn Hedges (a corporate PR agency) and the London Communications Agency on an integrated PR and public affairs brief, in order to try to drum up support for building a 2nd runway. Both agencies will work directly with the airport’s communications staff. They will be aiming to work at the local and regional level to “engage key stakeholders in London and West Sussex.” Gatwick is currently developing detailed expansion plans that could double the airport’s annual capacity to around 70 million passengers and will submit its case to the Airports Commission shortly.  Local campaigners have fought the threat of a second runway for years, as it would have seriously negative environmental and quality of life impacts for the area. Gatwick is legally prevented from starting a 2nd runway before 2019.


New book “Tangled Wings” on the history of Gatwick airport and its neighbouring village, Charlwood. By Brendon Sewill.

A brilliant account of the machinations and intrigues of how Gatwick got built, the history of the UK airport capacity story over decades, and a master class in how a local community has fought to defend itself.  And  how it is continuing the fight against a new runway.   Highly recommended.  £13.  Details ….

Gatwick Airport has brought in Fishburn Hedges and the London Communications Agency (LCA) on an integrated PR and public affairs brief, as it looks to gain support for building a controversial second runway. 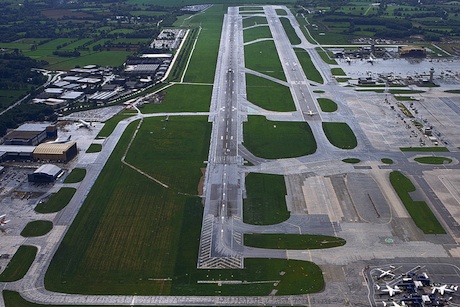 Both agencies will work directly with Gatwick’s comms team, with Fishburn Hedges providing strategic and public affairs support. LCA will work for the airport at a local and regional level as Gatwick engages key stakeholders in London and West Sussex.

Allowing a second runway at Gatwick is just one of several options for airport expansion in South East England, which has been a difficult issue for the Government.

After coming under pressure last year to reverse the Coalition’s commitment not to allow another runway at Heathrow, the Prime Minister set up an Independent Airports Commission, chaired by Sir Howard Davies, to look into options for expansion and report its findings after the 2015 General Election.

Gatwick is currently developing detailed expansion plans that could double the airport’s annual capacity to around 70 million passengers and is to submit its case to the commission over the coming months.

The airport was sold by Heathrow owner BAA in 2009 to a group of international investment funds, of which Global Infrastructure Partners (GIP) is the majority shareholder.

Rival options the commission is expected to decide on include expanding Heathrow or Stanstead and building a new airport in Thames Estuary.

Gatwick’s plans include evaluations of the environmental and economic impacts on the local area, which is likely to be fraught as campaigners have protested that the expansion will harm the environment and raise noise levels. It is legally committed not to build a second runway before 2019.

James Colman, corporate affairs and sustainability director at Gatwick Airport, said: ‘We believe a second runway at Gatwick could present the best long-term solution to the future capacity constraints in the South East.

‘We have the room to grow and our continued investment is proof that we’re putting passengers first. Fishburn Hedges and LCA are proving to be crucial partners for our team as we ensure we make our voice heard in this important debate.

This article was first published on prweek.com

Fishburn Hedges say they are:

“Straight-talking experts working with organisations across the world to build and protect reputations, shift attitudes and change behaviour.”

The  London Communications Agency say they are: