Children living under the Heathrow flight path are suffering two-month lags in their reading development as a result of aircraft noise. Hounslow council says pupils in the borough have to put up with “continual disruption”, and warned the problem will worsen if the airport expands to three or more runways. Around 40 schools are directly under the Heathrow flight paths with planes landing every 90 seconds or so much of the day. The council cites an international study by London University into aircraft noise which found it led to a “significant impairment” in reading development, as well as affecting long-term memory and motivation. As well as a 2-month delay in reading, the children’s education is suffering from the continual disruption from low-flying jets. If schools don’t have triple glazing the interruptions to lessons can be relentless. One school near the airport has had shelters installed in the playground so children can escape the noise. A 2010 ECRD study suggested that chronic aircraft noise has a deleterious effect on memory, sustained attention, reading comprehension and reading ability.

Children living under the Heathrow flight path are suffering two-month lags in their reading development as a result of aircraft noise.

Hounslow council claims pupils in the borough have to put up with  “continual disruption”, and warned the problem will worsen if the airport expands to three or more runways.

Around 40 schools are directly under the flight path with planes landing and taking all through the daytime. The council cites an international study into aircraft noise which found it led to a “significant impairment” in reading development, as well as affecting long-term memory and motivation.

The research, led by the University of  London, found that pupils under the Heathrow flight path suffered an  average two-month delay in reading.  Hounslow’s environment spokesman Colin Ellar said: “Our children’s  education is suffering from the continual disruption from low-flying jets and it’s up to the airport to be a good neighbour and ensure they do all they can to reduce the nuisance. The problem will only get worse if it expands with a third runway.”

Katharine Harper-Quinn, head teacher of Hounslow Heath Infants and Nursery School, said: “It’s extremely disruptive. Outside play for the  children is dominated by ear-deafening interruptions every two minutes as landing aircraft pass a few hundred feet over their heads.

“Inside, if you don’t have triple  glazing the interruptions to lessons can be relentless. It’s really difficult to keep the children focused. It can be really, really hard for the staff.”

The school, with 500 pupils aged three to seven, is two miles from the airport and has planes going overhead every 90  seconds unless runway alternation is in operation. It has shelters in the playground so children can escape the noise.

Heathrow has installed triple glazing in many local schools and homes.

The London Chamber of Commerce is calling for extra night flights into Heathrow to ease the capital’s aviation capacity crisis.

It says that allowing planes to land in the small hours would boost the economy. The chamber wants the measure included when the Davies Commission into aviation capacity makes its interim report in the autumn. In a meeting with the airports commission, the LCCI also backed more “mixed mode” flights — taking off and landing at both runways — during peak periods such as the summer holidays. Heathrow has up to 16 flights arriving between 11.30pm and 6am.

But John Stewart of anti-expansion group HACAN said: “Night flights are hugely unpopular with residents. There will be fury at the merest suggestion that the number should be increased.”

The head teacher of an infant and nursery school directly under a Heathrow flight path, close to the airport in Hounslow, has been speaking of the impact of the planes on the learning of children at her school. Kathryn Harper-Quinn, who runs Hounslow Heath Infant & Nursery School said a recent study had highlighted the dramatic impact planes thundering 600-feet overhead have on children’s learning. Asked to recall factual details from an outdoor lesson, she said, a class of 7-year-olds could remember about a third less than those hearing the same lesson in a specially built noise-insulated hut. When the study was repeated with a fictional story, there was no noticeable difference in performance – a result Ms Harper-Quinn put down to pupils being able to fill in the gaps more easily. Speaking at the official launch of Hounslow Council’s consultation on Heathrow, she claimed a 3rd runway would blight thousands more children’s education. The consultation questionnaire contain 11 questions, and the deadline for responses is May 16th. 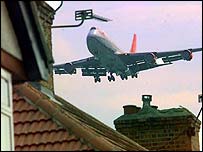 A team from Barts and the London NHS Trust looked at data on more than 2,800 children living near Heathrow and other airports in Spain and the Netherlands.

The Lancet study found each five decibel increase in noise level was linked to children being up to two months behind in their reading age.

A US expert said the study supported previous research findings.

The children, all aged nine or 10, attended schools near to London’s Heathrow Airport, Schiphol in the Netherlands and Barajas in Spain.

Aircraft noise might only have a small effect on the development of reading, but the effect of long-term exposure remains unknown

Professor Stephen Stansfeld, Barts and the London NHS Trust
But the researchers said their findings applied to the area around any airport.

Exposure to aircraft noise was associated with impaired reading comprehension, even after factors such as socio-economic differences between schools were taken into account.

Reading age was delayed by up to two months per five decibel increase in noise levels in the UK children studied, who attended schools in the boroughs of Hounslow, Hillingdon and Slough, and up to one month in the Dutch children.

A similar comparison could not be made for the Spanish children studied as there is no national data on reading age available.

Overall, the researchers found a difference of around 20 decibels between children exposed to the lowest and highest levels of aircraft noise.

This translates to a delay of up to eight months in a child’s expected reading age.

The researchers say that while this is significant, it is much lower than the two year reading age delay seen in children with learning difficulties.

They suggest that children exposed to noise learn to tune it out – but this can mean they also tune out other external noise, such as teacher’s instructions.

Increased levels of exposure to both aircraft and traffic noise was associated with additional stress in children and a reduced quality of life.

However, exposure to traffic noise alone did not have an effect on reading age and, unexpectedly, was found to improve recall in memory tests.

Professor Stephen Stansfeld, who led the research, said: “These exposure-effect associations, in combination with results from earlier studies, suggest a causal effect of exposure to aircraft noise on children’s reading comprehension.

“In practical terms, aircraft noise might only have a small effect on the development of reading, but the effect of long-term exposure remains unknown.”

He said the results were relevant to the design and placement of schools in relation to airports and to the formulation of policy on noise and child health as well as the wider consideration of the effect of environmental factors on children’s development.

Schools which already existed near to airports should be properly insulated to give children as much protection as possible from the effects of aircraft noise, said the researchers.

He highlighted one study which looked at children living near to the old Munich airport in Germany, before and after it was closed down.

“Children attending schools near the airport improved their reading scores and cognitive memory performance as the airport shut down, while children going to school near the new airport experienced a decline in testing scores.”

The London Borough of Hounslow said that, in light of the research, it had launched an investigation into the impact of aircraft noise on local schools.

This report is a literature review of the research into the effects of aircraft noise on children’s learning and cognition. The primary cognitive processes that are examined in relation to aircraft noise are episodic memory, semantic memory, sustained attention and reading comprehension.
The review includes early work in this area from the 1970s, to the most recent studies. Key
studies are described, along with suggestions for future research.

5.1 This review has aimed to describe the main contributions in the field of aircraft noise and cognitive ability in children. The results are not completely in agreement, but there is evidence to suggest that chronic aircraft noise has a deleterious effect on memory, sustained attention, reading comprehension and reading ability. Early studies highlighted that aircraft noise was also implicated in children from noisy areas having a higher degree of helplessness i.e. were more likely to give up on difficult tasks than those children in quieter areas. This motivational decrement was reported in various studies, and it was suggested that this should be an area for future research over a longitudinal study protocol.

.
5.3 It was suggested that language acquisition deficits may be related to the decrement in reading comprehension in children from noisy areas, but there is no agreement as to how these mechanisms are directly affected by noise.

.
5.4 It is largely recommended that future research needs to focus on longitudinal studies, to assess the long-term effects of chronic aircraft noise exposure on learning and cognitive ability in children. More detailed exploration of the mechanisms underlying the development of memory, attention and reading processes is needed, and how exposure to noise affects these. It would be useful to include measures of noise levels at home as well as at school. This would allow for the relative contribution of noise exposure at home to be assessed as well as at school, and allow for comparison between the two.

Background. Previous field studies have indicated that children’s cognitive performance is impaired by chronic aircraft noise exposure. However, these studies have not been of sufficient size to account adequately for the role of confounding factors. The objective of this study was to test whether cognitive impairments and stress responses (catecholamines, cortisol and perceived stress) are attributable to aircraft noise exposure after adjustment for school and individual level confounding factors and to examine whether children exposed to high levels of social disadvantage are at greater risk of noise effects.
Methods. The cognitive performance and health of 451 children aged 8–11 years, attending 10 schools in high aircraft noise areas (16 h outdoor Leq > 63 dBA) was compared with children attending 10 matched control schools exposed to lower levels of aircraft noise (16 h outdoor Leq < 57 dBA).