Virgin Atlantic has unveiled details of its UK domestic service, which is being called,  Little Red. It will launch on 31st March in Manchester, 5th April in Edinburgh and 9th April in Aberdeen, with a total of 26 daily services to Heathrow.  Little Red will be Virgin’s first ever domestic flights in the UK.  Virgin won key Heathrow take-off and landing slots after Bmi was taken over by IAG last year.  Virgin hopes these domestic flights will  feed traffic onto its international service. Virgin says Little Red will compete with BA on domestic air routes.  BA operates around 52 daily flights between Heathrow and Aberdeen, Edinburgh and Glasgow. BA also runs services to Scotland from Gatwick and London City airports.Apparently Virgin has partnered with a number of brands “to offer exclusive products on board including Irn Bru on Scottish flights, plane shaped Tyrells crisps and Bacardi Martini miniatures. It will later offer Krispy Kreme doughnuts, yoghurts from The Collective Dairy and Rude Health granola” !  Why ?! 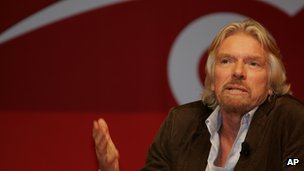 Sir Richard promised that Little Red will have a “rock and roll spirit”
Virgin Atlantic has unveiled details of its UK domestic service, including that the operation is called Little Red.

It will launch on 31 March in Manchester, 5 April in Edinburgh and 9 April in Aberdeen, providing a total of 26 daily services to Heathrow airport.

Virgin won key take-off and landing slots at Heathrow after the struggling carrier Bmi was taken over by British Airways’ parent company IAG.

Virgin Atlantic hopes that Little Red, which will use Heathrow Terminal 1, will help feed traffic onto its international service operating from Terminal 3.

Sir Richard said on Friday that Little Red will “go head-to-head with BA to provide domestic flights that deliver Virgin Atlantic’s rock and roll spirit as well as real value for money.

Virgin Atlantic is to call its soon to launch domestic airline services Little Red as it looks to take on BA in the region.

Little Red will be Virgin’s first ever domestic flights in the UK and aims to deliver Virgin Atlantic’s “rock and roll spirit,” the airline said.

Little Red will offer free check in luggage up to 23kg, pre-assigned seats and complementary food and drinks including snacks and hot breakfasts on early morning flights.

It has also partnered with a number of brands to offer exclusive products on board including Irn Bru on Scottish flights, plane shaped Tyrells crisps and Bacardi Martini miniatures. It will later offer Krispy Kreme doughnuts, yoghurts from The Collective Dairy and Rude Health granola.

Sir Richard Branson says the new service will challenge BA’s “monopoly” of UK flights from Heathrow since its acquisition of bmi by parent company IAG. It also aims to offer passengers more flexibility to connect with Virgin Atlantic’s international flights.

Sir Richard adds: “Virgin Atlantic has been on an incredible journey since we started with a single plane 29 years ago. Little Red represents the next step on that journey as we go head to head with British Airways to provide domestic flights that deliver Virgin Atlantic’s rock and roll spirit as well as real value for money.”

The launch will be the supported by press, social, outdoor, digital and radio activity.

Virgin to compete with BA’s Scotland to Heathrow links 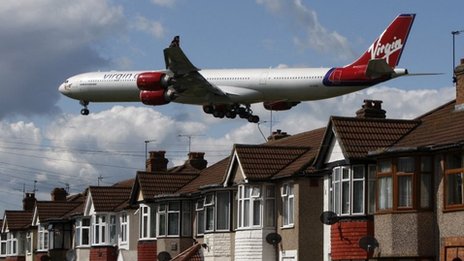 Virgin Atlantic has set out details of its plans to compete with British Airways on Heathrow links with Scotland.

It is to fly six round trips between the London airport and Edinburgh, with three round trips linking it with Aberdeen.

The airline says 150 people will be employed as a result of the move.

Virgin Atlantic will take over landing slots from BMI, after it was bought by British Airways owner, IAG.

From 31 March 2013, the planes are to be operated by Aer Lingus, but will be in Virgin Atlantic livery.

Scheduling is intended to appeal to business travellers wishing to spend a day working in either capital city, with departures from 06.40, as well as linking to international flights in to and out of Heathrow.

Having already committed to fly Heathrow to Manchester, this is the start of short-haul flights for Virgin Atlantic.

It has seen the opportunity to compete with its long-time British Airways rival, after regulators required it to give up slots to ensure competition is retained on Heathrow’s links to Edinburgh and Aberdeen.

As BMI had given up its Glasgow-Heathrow route, regulators did not insist on competition on that route. However, an assessment by the European Commission found there has been a significant increase in British Airways fares on the Glasgow route since BMI withdrew early in 2011.

“Virgin Atlantic will offer millions of passengers in Scotland and Manchester connections around the world through our and our partners’ long-haul network, with the additional benefit of providing direct services to and from London Heathrow,” he said.

“This is a robust business model that will protect competition to and from Heathrow for the long-term.”

Scotland’s Deputy First Minister, Nicola Sturgeon, welcomed the Virgin Atlantic plans, adding: “We are still concerned about the absence of competition on the Glasgow-Heathrow route, and will continue to promote its re-introduction, as well as our desire for better direct international connectivity.

“We also reiterate once again our calls for Air Passenger Duty to be devolved as quickly as possible to provide the means to incentivise new direct international services from Scotland.”

Scottish Secretary Michael Moore said: “These services operating from Edinburgh and Aberdeen will provide direct links to and from London Heathrow, as well seamlessly linking into Virgin’s long-haul network creating new links between Scotland and the rest of the world.

“Together, this will only benefit Scotland’s business and leisure travelers.”