A charity land use and transport think tank, the Independent Transport Commission (ITC), have produced a report – to be submitted to the Airports Commission, on airport capacity. The ITC report says one major hub airport is needed, in order to compete with European rival airports. Heathrow cannot be left as it is.  They say using two London airports to share the load will not do.  They also say that if that hub is not Heathrow, then Heathrow would need to close, in order to give investors confidence that airlines would move their business. Closing Heathrow would have immense implications, with 114,000 people directly and indirectly employed by the airport.  Its closure would have impacts on their families and the communities in which they live  – but release a huge area of land (some 1,200 acres for profitable re-development….. though a town the size of Peterborough would be needed for the new hub airport. Their report follows a call for evidence last summer.  The ITC’s key worry seems to be that “…we are losing that capacity to Charles de Gaulle, Frankfurt [and] Schiphol and the airlines will want to use those airports.”

The Independent Transport Commission (ITC) announces the launch of its report, “Flying into the Future: Key issues for assessing Britain’s aviation infrastructure needs.”

The report is based on the wide range of submissions received by the ITC in response to its Call for Evidence during Autumn 2012. The key findings are as follows:

First, the report identifies the crucial importance of good aviation connectivity for the
UK economy and jobs. The report concludes that investing in our aviation infrastructure is a
critical challenge that must be met if the UK is to maintain investment from growing
economies such as China and India. We face capacity constraints in both long-haul and
short-haul travel, particularly in South-East England.

Second, the report notes that short-haul connectivity can be improved by developing our regional airports, close to local and regional catchment areas.

But third, improving long-haul connectivity – and even maintaining the UK’s position in the
face of growing competition from rival European airports – means ensuring that the UK
continues to host a top-tier European hub airport. This means an airport with
significantly more capacity than Heathrow today.

The report rejects alternative suggestions such as 2 small hubs, or connecting different airports as a “virtual hub”: they would not compete effectively and would leave the UK increasingly dependent on connections via 3rd country hubs in order to reach global destinations.

The report suggests the most likely sites for an improved hub are Heathrow, Stansted or the Thames Estuary. It recognises that any decision will be contentious and that the Airports Commission and the Government will need to balance many factors.

But it highlights 4 major issues:

• Closing Heathrow: the ITC concludes that if a major new hub is developed at Stansted
or in the Thames Estuary, Heathrow will almost certainly have to close. This will have
major implications, and needs far more attention than it has yet received.

• Costs and charges: on the basis of preliminary, broad-brush, estimates, the ITC fears
that airlines and passengers might face charges at a new Estuary Airport more than
twice those for an expanded Heathrow, and two-thirds more than at an expanded
Stansted. It is essential that far more robust costings are produced for all options and
the implications for charges and international competitiveness clearly understood.

• A new town? Building a major new hub, whether at Stansted or elsewhere, could require
urban development including homes, schools, and local transport. The ITC estimates the
size of such development would be on the scale of a new Peterborough for a 4-runway
hub. This needs to be considered as much as the airport itself.

• Noise is the biggest local issue, particularly for Heathrow. But the report notes that
planes are getting quieter and proposes an assessment of whether a package of
measures – perhaps including moving the runways westward – would enable Heathrow to
provide the extra connectivity needed while also reducing the problem of noise for
Londoners.

.
The report is being submitted to the Airports Commission, chaired by Sir Howard Davies.

The ITC will consider what further research should be commissioned to follow up particular issues of importance, with a view to assisting policy makers on this vital economic and infrastructure decision.

The report will be published on the ITC website at: www.theitc.org.uk.
Independent Transport Commission  is Registered Charity: 1080134

Heathrow ‘would need to close’ under airport plans 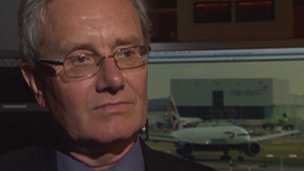 If the government decides to expand Stansted or build a new estuary airport to form the UK’s major air hub Heathrow Airport will need to close, a transport think tank has said.

The Independent Transport Commission said a major capacity airport is needed to compete with European rivals.

It said Heathrow would have to close to give investors confidence that airlines would move their business.

Its report will be submitted to the government’s Airports Commission.

The commission’s report, which a number of bodies – including airport protest groups and airport authorities – contributed to, concluded that one major hub is needed.

It discounted the idea of a dual airport dubbed ‘Heathwick’, developing competing hubs across the UK or keeping the status quo at Heathrow.

Stephen Hickey, from the Independent Transport Commission, said: “Heathrow has now been overtaken by many of its competitors on mainland Europe and that will be a loss to the UK and London.

“At the moment we have the benefit of one of Europe’s top hub airports.

“The risk is we are losing that capacity to Charles de Gaulle, Frankfurt [and] Schiphol and the airlines will want to use those airports.”

In September, the government launched a review of how the UK might expand its airport capacity in the South East.

Options included adding a third runway at Heathrow, adding a second runway at Gatwick and building a new airport in the Thames Estuary.

The report, Flying into the Future, stated: “In the event of a decision to develop a major hub airport at either locations [Stansted or the Thames Estuary], we do not see how the current Heathrow could continue to operate.

It said it does not believe enough consideration has been given to the possible loss of jobs or the potential cost of compensating airline businesses which have invested in Heathrow.

Closing Heathrow would have “major impacts on the 114,000 people directly and indirectly employed by the airport as well as their families and the communities in which they live”, it said.

But it added that releasing some 1,200 hectares of land – the size of Kensington and Chelsea – could offer “unparalleled opportunity for redevelopment for housing and other uses in a prime west London location”.

The commission is funded by a range of donors, Mr Hickey said, including airlines and the Civil Aviation Authority.

The Airports Commission will make its final report to the government in the summer of 2015.

Heathrow Airport would have to close if a so-called “Boris Island” Estuary hub were to be built to improve the UK’s airport capacity, according to a new report.

Far more attention needs to be paid to the consequences for the west London gateway of expanding elsewhere, an Independent Transport Commission study suggests.

The report, which is to be submitted to the government’s Davies commission on airport capacity, says development at Stansted may have similar implications – in both cases closure would be necessary to give investors confidence that airlines would move their business.

Charges at a Thames Estuary airport would likely be twice those at an expanded Heathrow, and 65 per cent more than at a developed Stansted, the study argues.

They add that the prospect of a new “Peterborough-sized” town being built up around a new four-runway hub airport should be taken more deeply into consideration.

The report is based on a range of submissions to the ITC, from respondents including Transport for London, Heathrow and Gatwick airports, and anti-Heathrow expansion campaign groups.

The government’s commission on airport capacity, chaired by Sir Howard Davies, is due to report in mid-2015.

In Summer 2012 the ITC put out a call for evidence on:

Aviation Futures: What are the strategic choices for aviation capacity in the UK?

This Call for Evidence was launched in July 2012 on the subject ‘Aviation Futures: What are the strategic choices for aviation capacity in the UK?‘ [Please see this linked page for information.] [No linked page is given … AW].   The consultation was designed to provide insights into the challenges facing UK Aviation Strategy, and to inform the ITC’s research on this subject. The submission was followed by a number of oral evidence hearings at Rothschild during November 2012.

The Questions on which submissions were sought included:

Submissions: We received many excellent responses and are grateful to all who contributed. A list of submissions may be requested from the ITC Secretariat, but due to the submission of sensitive information we do not intend to publish responses online.

First, is there a need for greater aviation capacity in the UK, and of what type?

Second, over what timescale do we need to solve our aviation needs?

Third, what are the risks of failing to provide additional capacity?

Fourth, what are the key criteria for determining environmental acceptability of any development?

And finally, if more capacity is needed, what are the main options to solve this and what are the issues they raise?

The list of commissioners of the ITC is at http://www.theitc.org.uk/dyn.php?page=3

The list of patrons of the ITC is at http://www.theitc.org.uk/54_Patrons.html

The list of funders (including many airports) of the ITC is at http://www.theitc.org.uk/5_Funding.html

The ITC say their mission statement is:

The Independent Transport Commission is committed to providing insight and analysis of long-term strategic issues facing the fields of transport and land use. Our mission is to explore the long-term consequences of current policy, consider new approaches and make recommendations on the way forward.