Balfour Beatty may sell Exeter airport due to financial problems

Exeter airport was sold by Devon County Council to the airports group of British infrastructure company, Balfour Beatty, in early 2007. Now Balfour Beatty has started looking for buyers for its 60% stake, according to Sky news. The price is not known. Balfour Beatty has not been doing well in recent years, and they issued their second profits warning in six months, blaming “extremely tough” market conditions etc.  The airport has not been doing well. The number of travellers using Exeter Airport topped one million in 2007 but has been falling since then, though the rate of decline has slowed since 2009. In 2012 passenger numbers were down to  697,074, following a drop of nearly 4% in 2011.   About 250 people are directly employed by the airport, with a further 50 working at car parks, catering and retail concessions on the site.  The remaining shareholding in Exeter airport is owned by Galaxy, a specialist fund which is backed by French and Italian investors and the European Commission. 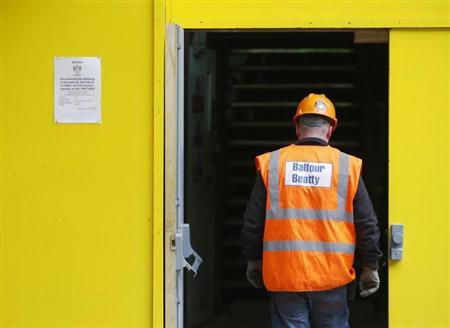 The price of the stake sale, which is at an early stage, is still unclear, the report added.

The group warned last month that its 2013 profit would be significantly below its expectations, hit by worsening market conditions and poor operational performance at its UK construction arm.

The FTSE-250 company sold stakes in five private finance projects earlier this month, as its management team is speeding up a revamp of its asset portfolio, Sky News said on its website.

Balfour Beatty could not be reached for comment outside regular business hours.

29.5..203 (TravelMole)
Balfour Beatty is looking for a buyer for its 60% stake in Exeter International Airport, according to Sky News.

The construction company led a buy-out of the airport from Devon County Council for £60 million in 2007, but according to news reports it has begun early talks with parties who might be interested in buying its share.

In August last year, Balfour wrote down the value of its holding in Exeter Airport from £12m to zero, saying that “whilst underlying trading has not deteriorated we believe that the timing for recovery of passenger numbers has gone further out, particularly in the light of the imposition of increased Air Passenger Duty rates”.

The remaining stake is held by Galaxy, a specialist fund backed by French and Italian investors and the European Commission.

TRANSPORT links to Plymouth have once again come under the spotlight as speculation mounts over the future of Exeter International Airport.

Majority shareholder Balfour Beatty is reportedly sounding out potential bidders for its 60 per cent stake in the airport.

And the group battling to reinstate Plymouth’s closed down airfield says it shows the city should have been at the hub of aviation to the region.

The news comes just days after Flybe, the West Country’s last remaining airline announced it had sold its arrival and departure slots at Gatwick Airport to Easyjet.

Plymouth City Airport closed in 2011 and campaign group Viable is now attempting to take it over from leaseholders Sutton Harbour Holdings.

Viable spokesman Raoul Witherall said: “Viable has been making the case for a long time that the aviation fundamentals in the South West are strongest in Plymouth, and Exeter and Newquay have question marks over them.”

Newquay Airport confirmed earlier this month that its passenger numbers had fallen by a fifth for five years running.

The Cornish airport has seen a drop of 25,000 passengers in the last two years, with city-based campaigners blaming the demise of Plymouth’s airport on its struggle.

Now it has emerged that Balfour Beatty is understood to be keen to offload its stake in Devon’s only airport, at Exeter, amid pessimism about the prospects for a recovery in passenger numbers.

About 250 people are directly employed by the airport, with a further 50 working at car parks, catering and retail concessions on the site.

The remaining shareholding in Exeter airport is owned by Galaxy, a specialist fund which is backed by French and Italian investors and the European Commission.

Devon County Council sold the airport in 2007 to a consortium led by Balfour Beatty for £60million.

The likely value of any deal to sell the FTSE250-listed group’s stake is unclear, as is the identity of any interested parties.

In August, Balfour wrote down the value of its stake in the airport from £12million to zero, stating that “while underlying trading has not deteriorated we believe that the timing for recovery of passenger numbers has gone further out, particularly in the light of the imposition of increased Air Passenger Duty rates”.

The number of travellers using Exeter Airport topped one million in 2007 but has been falling since then, though the rate of decline has slowed since 2009.

Last year passenger numbers were down nearly two per cent, to 697,074, following a drop of nearly four per cent in 2011.

Balfour Beatty declined to comment on Sky News reports that it is seeking bidders for its stake in the airport.

A spokesman for Exeter Airport said: “We cannot comment on any such speculation, which is an issue for the parent company.

“As far as we are concerned, it is business as usual for our staff and passengers.”

The sale process is reported to be at an early stage and follows two profit warnings from Balfour Beatty in the space of six months.

The loss of Plymouth’s airport coincided with heavy flooding in other parts of Devon which saw rail links to the city cut off during severe weather last year.

Network Rail, the state quango which runs the track, has drawn up a programme of ten projects to avoid interminable delays on the western route if heavy rain returns.

Action to reduce the frequency of flooding at Cowley Bridge is the most significant of the schemes, which will cost £31million in total.

The proposal is now with the Department for Transport, which will decide whether to sign off on extra funding for the 10 schemes after ordering Network Rail to carry out the post-flooding review.

The resilience of the rail network is now seen as even more important following the loss of Plymouth’s air link, and the region having just one fully dualled road into the far South West despite long-standing calls for improvements.

And a bit of history:

Airport Sold for £60 million to RCA

DEVON County Council has sold Exeter International Airport for £60 million to Regional and City Airports (Exeter) Ltd (RCA) in a deal described as good news for the airport’s future and the county economy.

RCA brings both the investment expertise and infrastructure development skills of Balfour Beatty, the UK’s leading engineering, construction and services group, and the airport operational skills of London City Airport to the task of building on the airport’s impressive growth record of recent years.

RCA say they want Exeter to become “the natural airport of choice for the region.” RCA was the unanimous choice of the County Council’s all-party steering group, chaired by Cllr Greenslade, which has overseen the sale process.

As part of the sale London City Airport will provide additional management expertise through a technical services agreement to support the further growth and development of Exeter International Airport.

The County Council will retain a “golden share” and a non executive seat on the board of Exeter International Airport. The golden share will protect the Council’s interests by requiring the new owners to provide and maintain airport facilities to a set of objective criteria based on Civil Aviation Authority regulations and Department for Transport security regulations.

Councillor Greenslade said “RCA were the unanimous choice of the all party steering group which has overseen the sale process.  I am grateful to the steering group and County Council officers and advisors for the work that has been done. The bid submitted by RCA was outstanding and we are confident that the future success of Exeter International Airport for the people of the county and the Devon economy will be assured. It is also very good news for the mployees of EIA and the airlines that use the airport. Regional and City Airports have an excellent track record at London City Airport not least in terms of the care they take to be good neighbours to the community who live around the airport. We are assured that they will take the same care with operating Exeter International Airport.

I would also like to pay tribute to the Exeter and Devon Airport Ltd Board, the management and staff of Exeter International Airport who under the ownership of Devon County Council have taken the Airport from a loss making position, which was subsidised by the County Council, to an operating profit position which has made it such an attractive asset for sale. In saying this I would pay tribute to our local airline Flybe who have shown confidence in Exeter International Airport and helped to grow the operations at Exeter to a level we could have only dreamed of a few years ago.”

Cllr Richard Westlake, Chairman of the Exeter and Devon Airport Ltd Board, said: “Exeter International Airport has gone from strength to strength under Devon County Council’s stewardship. I would like to thank the airport management and staff for the great contribution they have made to the airport’s development. I look forward to Exeter International Airport achieving even greater success under the ownership of Regional and City Airports.”

Commenting on the deal, RCA Director of Airport Management, John Spooner, said: “This is a great start to the new year for the airport, for RCA and for Flybe. Together, we have a vision for Exeter International Airport, in which it becomes the natural airport of choice for the region. We aim to deliver an efficient, high-quality service and offer excellent value for money.

Balfour Beatty, the international engineering, construction and services group, announced that Regional and City Airports (RCA), its specialist airport investment and development group, has completed the acquisition of Exeter and Devon International Airport Ltd, which owns Exeter International Airport, for a consideration of £60 million.

The acquisition is being financed through £31 million of equity, with Balfour Beatty as the lead investor. The remainder of the consideration will be satisfied by limited recourse borrowings, with HSBC as financial adviser and lead arranger. London City Airport, through a technical services agreement, will be Balfour Beatty’s operational partner at the airport.

Commenting on the sale, Balfour Beatty Chief Executive, Ian Tyler, said: “Exeter International Airport is one of the fastest-growing regional airports in the UK and it is anticipated it will handle over a million passengers in 2006/2007. We anticipate further strong growth in passenger numbers and have a clear operational and development plan for the airport over the long term, which takes our growth forecasts fully into account. Our vision for Exeter International Airport is that it should become the airport of choice for the region.”

Exeter International Airport is positioned within a strong local economy with a high propensity to fly and has significant opportunities to increase both its share of the regional market and the use of the airport by the population in the surrounding area. The airport will be substantially redeveloped with new terminal facilities, new aircraft stands and, in the longer term, further  terminal capacity, stand and taxiway development.
It is anticipated that a new departures building will be constructed by 2010.

The initial development phase will also include improvements to the airport’s surface access, stand and apron enhancements and an increase in car parking capacity. In the longer term, further terminal and ancillary facilities expansion is envisaged to be carried out over three phases.