Paul Kehoe, the Chief Executive of Birmingham Airport,  has commissioned research to back his campaign to get more long haul flights to his airport. The 400 metre runway extension at Birmingham (taking the runway to some 3,000 metres) should be in use by spring 2014.  The new report says that Birmingham is well situated for a large number of UK businesses that want to do business abroad and fly abroad. It says Birmingham has the second largest business catchment – within 2 hours travel – in the UK and the biggest number of manufacturers.  Therefore Kehoe argues (as he has done consistently for years) that if this government is to fulfil its promise to rebalance the UK economy towards manufacturing and exports, there have to be more long  haul flights from the Midlands and further north.  Business people don’t want to land at  Heathrow and have to treck up north by road or rail.  The report says “long-haul airports at Heathrow, Birmingham and Manchester could serve and support growth in economies of their sizeable catchment areas. But unlike Manchester Airport, Birmingham Airport is uniquely placed to ease congestion at Heathrow.”

Manufacturers need better flight links outside London if coalition is to fulfil vow to rebalance economy towards exports, says CEO 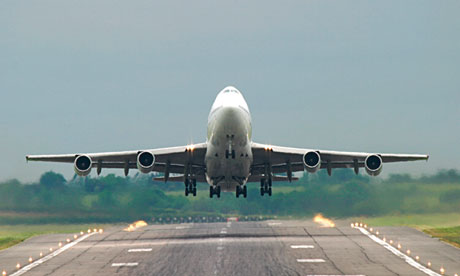 Birmingham airport has more than half a million businesses within the catchment, about a quarter of all Britain’s businesses, says a report. Photograph: Alamy

Britain’s manufacturers urgently need better flight links out of airports beyond London if they are to power the economic recovery, according to a report from Birmingham airport that seeks to shift the aviation capacity debate away from Heathrow expansion.

Kicking off a public campaign for a network of long-haul airports to serve the UK, Birmingham is releasing research [ Great Airports for Great Cities, ] that highlights its position in Britain’s industrial heartland. The airport says it has the second largest business catchment [generally regarding the catchment area of an airport as 2 hours travel time to it] in the UK and the biggest number of manufacturers.

Paul Kehoe, the airport’s chief executive, argues that if the government is to fulfil its promise to rebalance the economy towards manufacturing and exports the country’s aviation strategy needs to better serve businesses in the industrial heartland.

“This report shows that a surprisingly high proportion of the country’s potential demand for business air travel comes from Birmingham airport’s catchment area. But rather than flying from their local airport, we have ended up with an illogical situation where these businesses have to slog down the M1 or M40 to get to Heathrow – leaving them with huge time and cost implications and adding to the congestion at our London airports,” he said.

The report, carried out by Capital Economics, found that more than half a million businesses are within the Birmingham airport catchment – around one quarter of all Britain’s businesses. It highlights strong demand for flights to Asia and the Middle East from them, but says they are forced to travel from airports in the south.

Local businesses have argued that the aviation industry needs to operate more long-haul flights out of Birmingham, especially once a runway extension is completed next year.

Steve Brittan, whose manufacturing company BSA Machine Tools does 90% of its trade overseas, says with the domestic and eurozone economies struggling he is increasingly looking for business further afield. He travels out of Birmingham rather than Heathrow, but has to spend time changing planes in cities such as Amsterdam.

“Currently we have to fly via European hubs to connect with our customers that are located globally in Asia and the Americas. These difficulties can put off overseas customers visiting our plant in Birmingham,” he said.

“This is the heart of manufacturing here and if we are serious about things … we need an international airport.”

The report also highlights obstacles for business travellers coming into the UK, noting that Birmingham airport’s catchment was the destination for a quarter of all foreign direct investment that came into Britain in 2011.

Peter Mathews at Black Country Metals argues that the current focus of the aviation industry on Heathrow is costing companies outside London business.

“There are people who come to London and won’t travel up to Birmingham, and that is a problem. Manufacturing is not in London, it’s in the Midlands and further north,” he said.

The research was commissioned by Birmingham airport to help form its response to the Sir Howard Davies commission into aviation capacity, which is not due to report until June 2015, after the next general election.

Davies has promised, however, that his interim findings in late 2013 will significantly narrow down the options for potential airport expansion.

British Exports Best Served by a Network of Airports, Not a London Hub, Says Aviation Chief

The report, Great Airports for Great Cities, provides further evidence to show that expanding Heathrow is not a national aviation strategy because it will not best serve huge numbers of businesses outside of London, it will not help to support our manufacturing sector nor will it distribute economic growth across Britain.

The report, conducted by economic consultancy Capital Economics, looks at the economic value of the catchment areas of Britain’s long-haul airports [1]. It shows that Birmingham Airport has the largest number of businesses in its catchment, other than Heathrow, with strong demand for flights to Asia and the Middle East, but that these businesses are currently forced to travel from airports in the South.

The key findings in the report were:

• Over ½ million businesses are located within the Birmingham Airport catchment. This represents around one quarter of all Britain’s businesses and is the second largest business catchment after Heathrow.

• These businesses employ 6.4 million workers – over 25% of Britain’s entire workforce.

• There are more managers in Birmingham Airport’s catchment than for any other long-haul airport – 25% of Britain’s total. Managerial level workers have the highest propensity to travel for business than any other employment group.

• Over three million business trips were made from the Birmingham catchment in 2011 – second only to Heathrow.

• Birmingham Airport has the largest share of manufacturing activity out of any long-haul airport catchment – particularly high-value manufacturing including transport, machinery, motor vehicles and aerospace.

• Birmingham Airport’s catchment was the destination for a quarter of all Foreign Direct Investment that came into Britain in 2011.

• Businesses in Birmingham’s catchment exported more goods to Asia and the Middle East than any other airport’s catchment area.

The report was commissioned by Birmingham Airport as part of a series of publications to help inform its response to the Airports Commission and was launched at a reception in Birmingham on Monday evening attended by key business people.

“This report shows that a surprisingly high proportion of the country’s potential demand for business air travel comes from Birmingham Airport’s catchment area.

“But rather than flying from their local airport, we have ended up with an illogical situation where these businesses have to slog down the M1 or M40 to get to Heathrow – leaving them with huge time and cost implications and adding to the congestion at our London airports.

“The evidence in this report shows that a lot of these businesses specialise in high-value manufacturing and for manufacturers international connectivity is fundamental to their ability to export their goods.

“It is clear that UK exports are best served by a network of airports, not a London hub, and if the Government is serious about boosting growth across the UK and about encouraging a renaissance in our manufacturing sector then we need a complete rethink of our aviation model.

“Instead of building one mega airport in the South East, which is inconvenient for anyone beyond the M25, we need a network of great British airports that serve our great cities. We need to start putting the passenger, and the not the industry, first in the debate.”

Mark Pragnell, author of the report from Capital Economics, said:-

“The realities of the changing global economic landscape are that British businesses will increasingly require connections to long-haul destinations to be successful. We all know that Asia, South America, the Middle East and, eventually, Africa will be key markets for British exporters. But these long-haul locations are also growing in importance in the supply chains of British manufacturers, as investors into British firms and British infrastructure, and as the source of new ideas, innovation research and development.

“Few airports are equipped to help businesses make these long-haul connections – and most are concentrated in the already congested London area. Birmingham Airport has a population of 35 million within two hours travel time of it, which is the largest market of any airport with long-haul capacity. It is also the most convenient long-haul airport for 15½ million people.

“It is the best located airport to serve the long-haul needs of over ½ million businesses employing 6½ million people. A long-haul Birmingham Airport is the most convenient for not only the Midlands, but also much of Wales and the South West, taking pressure off over-crowded London airports.

Work has started to extend the runway at Birmingham Airport in a bid to compete for long-haul flights. It could be in use by spring 2014. Planning permission was granted in 2009 and in February final approval was given for the £40m project to extend the runway by 400 metres. Chief executive Paul Kehoe said the extension would allow Birmingham to compete with Manchester for flights to the US and the Far East and double capacity. Birmingham is currently England’s 2nd largest regional airport after Manchester, serving 9.6m passengers a year. David Learmount, from Flight International Magazine, said that although Birmingham could “theoretically” become a “hub” airport and fly to destinations like China, it was “very unlikely to”. He said not enough passengers would fly into Birmingham wanting to go on to those sorts of destinations, unlike Heathrow – and it would benefit largely local “pleasure passengers” who would be able to choose from more holiday destinations. [So not increasing business, and increasing the tourism deficit].https://www.airportwatch.org.uk/?p=1480