Gatwick Airport has appointed a leading architect, Sir Terry Farrell, to help in its plans to build a 2nd runway. Sir Terry will help Gatwick in its proposals for a “constellation of 3 London airports” with 2 runways each – 2+2+2. Gatwick hopes competition between it, Heathrow and Stansted was “the best solution for London”.  Sir Terry’s previous projects include the MI6 building and Home Office headquarters in London and Incheon Airport in South Korea.  Sir Terry’s firm, Farrells, will look at the impact on London of having competing airports of equal size compared to a single “mega-hub” airport.  He said: “The world city of London, with the largest aviation market in the world, is the hub and its airport infrastructure needs to evolve and grow around the city” and that “a single mega-hub airport is at significant odds with what London needs.” 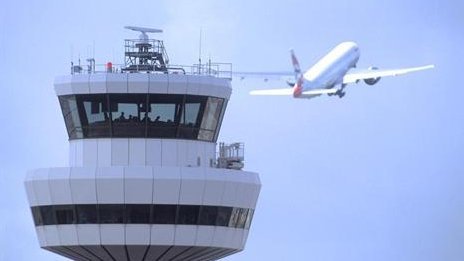 Gatwick Airport has appointed a world-leading architect to help in its plans for runway expansion.

Sir Terry Farrell will help in its proposals for a “constellation of three London airports” with two runways each.

Gatwick said competition between it, Heathrow and Stansted was “the best solution for London”.

Sir Terry’s previous projects include the MI6 building and Home Office headquarters in London and Incheon Airport in South Korea.Stewart Wingate, chief executive at the West Sussex airport, said: “Having designed major transport infrastructure around the world, including the hub airport in South Korea, he will bring to the airport a track record of delivering major transport projects whilst ensuring London and the UK gets the right solution.”

In September, the government announced an Airports Commission to look at aviation in the UK, including how to deal with the South East’s congested airports.

Sir Terry’s firm, Farrells, will look at the impact on London of having competing airports of equal size compared to a single “mega-hub” airport.

He said: “The world city of London, with the largest aviation market in the world, is the hub and its airport infrastructure needs to evolve and grow around the city.

“The concept of building a single mega-hub airport is at significant odds with what London needs.”

In June Heathrow bosses claimed a third runway would be “cheaper, quicker and better for the economy” than building a new airport.

Vision of the future? A view of the Isle of Grain plan favoured by the Mayor
By Matthew Beard, Transport Editor   (Evening Standard)
15 July 2013

A leading architect today attacked Boris Johnson’s “mad” plan to build a £65 billion airport on the Thames Estuary and compared it to a project that Adolf Hitler might have dreamed up.

Sir Terry Farrell, who has designed some of the world’s largest airports and rail stations, said the scale of the proposed four-runway project would be unprecedented in Britain and made the Government’s HS2 high-speed rail project “look like chicken feed”.

The Mayor today underlined his commitment to an estuary airport by naming Sir Norman Foster’s Isle of Grain plan as his first choice. Expansion at Stansted was his second choice with a “Boris island” in the outer estuary third.

He also wants to shut Heathrow at a cost of £15 billion and create a new London borough for 250,000 residents.

Sir Terry’s comments will escalate the tension between Heathrow, Stansted and Gatwick  as they go public with their plans to solve London’s aviation capacity crisis this week.

Sir Terry, who is working on Gatwick’s bid to build a second runway, told the Standard: “When people say that you have got to have vision, well Hitler had vision.

“Vision can be a madness where you get so obsessed you throw everything you have got on the roulette table and hope you got it right.” He said closing Heathrow and moving the predominant London airport to the eastern extreme would be “flipping London”, adding: “In that case people say you could make Heathrow a new town. It makes HS2 look like chicken feed. It’s going to be the biggest project the UK has ever done in its history.” Sir Terry was approached by the Mayor to work on his estuary airport plan but turned the work down. The architect was the chief planner of estuary regeneration scheme the Thames Gateway and has designed South Korea’s acclaimed hub airport at Incheon and the world’s biggest rail station in Guangzhou, China. His buildings in London include the MI6 headquarters, Charing Cross station and the Home Office.

Sir Terry, who is also a member of the Mayor’s design panel, added: “The obvious political solution is that he (Boris Johnson) wants the airport to go somewhere that is not in his constituency — out of his voters’ territory.” Last week the architect was hired by Gatwick to promote its proposal to build a second runway. It is part of a grand plan to link Gatwick to two other two-runway airports, Heathrow and Stansted.

The Mayor’s aviation adviser Daniel Moylan said: “An airport in the estuary works in surface access terms not just for London but for the whole country and our proposals prove it. There are better and cheaper connections from most parts of west London than currently serve Heathrow.”

The plan envisages rail links from Old Oak Common, near Paddington, and Waterloo in 26 minutes.

Sir Terry’s “constellation” plan would require two new rail lines linking Gatwick to London but would otherwise rely on advances in traffic management to create a “network” for passengers to move between airports.

A dominant four-runway hub airport is not suited to a metropolis such as London, he said. “Los Angeles, Tokyo and New York tend to have a constellation because you are serving a whole region. In a metropolis there is no ideal place to put one airport because no matter where you put it is the wrong place for a lot of people.”

Sir Terry said there would be an enormous “carbon impact” of moving to the estuary with the relocation of 100,000 jobs and 250,000 people. He said it was on the wrong side of London for much of Britain and would create an extra 100-mile round journey for air passengers.

He added: “An extra runway at Gatwick leads you to an approach to London and the South East that is much more flexible and is part of a network rather than a four-runway hub which is the wrong answer wherever it is. They would all put their eggs in one basket and this would result in an over-engineered, highly inflexible and vulnerable system.”

The Mayor proposes that Heathrow should be transformed into a residential and commercial neighbourhood which he claims would create 40,000 new jobs. Heathrow’s owners described the blueprint as “extraordinary” and would result in the biggest job losses since coal pit closures in the 1980s. Hounslow deputy leader Colin Ellar said: “Closing Heathrow is sheer lunacy. We and many sensible commentators don’t seriously think Boris Island will ever take off.”

February 5, 2013    Gatwick Airport has brought in Fishburn Hedges (a corporate PR agency) and the London Communications Agency on an integrated PR and public affairs brief, in order to try to drum up support for building a 2nd runway. Both agencies will work directly with the airport’s communications staff. They will be aiming to work at the local and regional level to “engage key stakeholders in London and West Sussex.” Gatwick is currently developing detailed expansion plans that could double the airport’s annual capacity to around 70 million passengers and will submit its case to the Airports Commission shortly.  Local campaigners have fought the threat of a second runway for years, as it would have seriously negative environmental and quality of life impacts for the area. Gatwick is legally prevented from starting a 2nd runway before 2019.    Click here to view full story…