In February Heathrow announced it was intending to increase its airline landing charges, from the current level of £17 per passenger to perhaps up to £25. This caused very negative responses from airlines that use the airport. Now Heathrow has moved to appease airlines by offering to reduce the rise it is seeking to charge between 2014 and 2019. Heathrow has submitted a plan to the CAA seeking approval to raise tariffs by 4.6% above inflation, as measured by the retail prices index (RPI), for the 5 years from April 2014. That is 1.3% lower than their earlier offer of a rise of 5.9%. It means a rise of £1 per  year, so a £5 rise by 2019. Gatwick has also agreed to scale back their planned fee increases. Earlier this year Willie Walsh called the airport “over-priced, over-rewarded and inefficient”.  However, the investors, including Ferrovial and the sovereign wealth funds of Qatar, China and Singapore, who have spent more than £10 billion on the airport over the last decade, expect to see a good return on their investment ie. they want high fees to airlines.


Heathrow looks to increase charges by  £1 a year

23 JULY 2013
Bosses at Heathrow airport have submitted a new, lower figure for the amount they say they should be allowed to charge airlines for using it from 2014 to 2019.

But the reduced figure, which will add about £1 a year to passenger ticket prices, is still much higher than that proposed by the Civil Aviation Authority.

The CAA initially said the increase in passenger charges should be capped at RPI minus 1.3 per cent. The authority will take a final decision on the charges, currently about £20 a ticket, in January.

Airport chiefs announced the revised figure as they published the results of a survey of 1,178 Heathrow passengers. This suggests passengers would rather have better services than see investment at Heathrow – which wants a third runway – cut back and air fares kept down. Under its alternative business plan, Heathrow’s charges to airlines are the equivalent of an annual increase of the RPI inflation rate plus 4.6%, compared with the original plan which would see passenger charges rising by RPI plus 5.9%.

The new figure would mean air fares go up by £1 per ticket per year, with charges making up just 5 per cent of the average ticket price, Heathrow said. 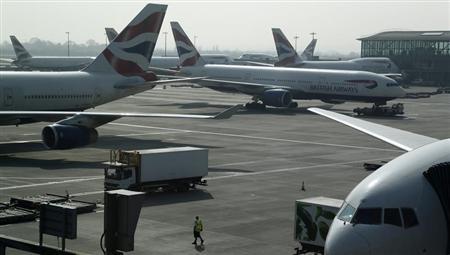 (Reuters) – London’s Heathrow airport has moved to appease airlines by offering to reduce a hike in landing fees it is seeking to charge between 2014 and 2019.

As part of a proposed new pricing regime, Britain’s busiest airport has submitted a plan to the UK’s Civil Aviation Authority (CAA) seeking approval to raise tariffs by 4.6 percent above inflation, as measured by the retail prices index (RPI), for the five years from April 2014.

This is 1.3 percentage points lower than an offer Heathrow bosses made earlier this year, which led to a backlash from many of the carriers

using the west London hub. The move reflects a similar move by Gatwick, Britain’s second-busiest airport, to scale back its planned fee increases.

Although the fees are charged to airlines, they may be passed on to passengers in the form of higher ticket prices.

Heathrow Chief Executive Colin Matthews said the airport’s investors, who have spent more than £10 billion on the airport over the last decade, rightly expected to see a fair return.

Heathrow’s investors include Spain’s Ferrovial and the sovereign wealth funds of Qatar, China and Singapore.

Heathrow plans to invest a further £3 billion to improve the airport between 2014 and 2019 and said it had identified £427 million of cost savings to help it cut landing fees.

“The plans seek to strike the right balance between continuing to invest for passengers and keeping charges at a level that is affordable for airlines,” said Matthews.

“The level of charges at Heathrow is also tightly linked to the historic level of capital investment in new facilities.”

In April the CAA recommended that increases in landing fees at Heathrow should be capped at 1.3 percent below inflation.

Gatwick said in June it was reducing its requested fee increase to RPI plus 1.5%, having previously sought an extra 4%, in the seven years through to 2021.

Simon Calder in the Independent says

Meanwhile Heathrow has stepped up its campaign to raise passenger charges above the rate of inflation. A survey conducted by Europe’s busiest airport claims passengers they would be willing to pay a mean increase in charges of £44 per journey rather than see investment fall. The airport is proposing a £5 rise over five years.

Colin Matthews, chief executive of Heathrow, said: “We’re making clear that passengers want these improvements and are prepared to pay for them”.

Robert Peston on the CAA and airport charges: Heathrow warns of investment threat

June 25, 2013       Robert Peston explains the rows about Heathrow’s charges. The CAA has calculated how much Heathrow should charge airlines, based on how much profit it should be allowed to make over the next 5 years. Heathrow wants high charges, and predictably, the airlines want low charges. Heathrow has invested £11bn in improving its airport terminals and facilities over the past decade and is telling the CAA that not allowing an increase in its fees would make its future plans to invest £3bn “economically irrational”. Heathrow says its shareholders won’t put up the money for future necessary investment if the charges are too low – their owners would have no interest in financing new runways on the proposed level of allowable return. Robert Peston says the dispute is not likely to be settled quickly and there may be an appeal to the competition authorities. At the heart of the dispute between Heathrow and the CAA is the extent to which Heathrow is subject to risk and competition. In recent years, Heathrow’s owners, led by Ferrovial, have made no money at all, largely because of regulatory intervention.      Click here to view full story…

June 23, 2013     Willie Walsh, chief executive of International Airlines Group, the owners of British Airways, has attacked Heathrow for applying to the CAA to be allowed to charge airlines 40% more to use the airport over the next 5 years. The CAA is expected soon to announce the new regulated costs of using the UK’s airports for the next 5 years. Heathrow has said it needs the large increases to pay for more capital investment and improving the facilities for passengers. Willie Walsh is complaining about this and making out that BA cares about lower fares for its passengers: “In the interests of air travellers, we believe it is high time these charges started to come down.” British Airways has its hub at Heathrow and has the largest number of flights and passengers there. Mr Walsh said the airport had failed to get to grips with costs and that as the only hub airport in the UK it was acting as a monopoly provider.    Click here to view full story…

June 18, 2013      Heathrow, which is currently enjoying 4 nights of BBC programmes this week on “Airport Live” giving hours of free publicity, has had a new report published. This is called “Heathrow: Best placed for Britain” (by AECOM and Quod) and its purpose is to set out Heathrow’s case that it is far better value to the UK economy and the UK taxpayer to expand Heathrow rather than to build a brand new airport in the Thames Estuary, or expand Stansted. Also that the UK must have one huge hub airport, and no other solution will do, as the airlines will only make enough profit by using the hub. Heathrow does admit that the taxpayer will have to contribute funds for expansion plans involving at least one new runway. However, it is coy on the matter and gives no indication of how much. The report says: “Financing additional capacity at Heathrow entirely from the private sector will be challenging and will need an appropriate investment framework. The recent difficulties in securing investment for new UK nuclear power stations are a reminder of the difficulty in securing commercial finance for major infrastructure projects without an attractive and stable return.” Heathrow makes out that rejection of its proposals could consign a generation to economic stagnation.      Click here to view full story…

February 19, 2013    Colin Matthews has defended steep rises in landing charges that will push up air fares by saying returns to investors now have to come first, despite a leap in revenues at Heathrow in 2012, due to record passenger numbers in 2012 and higher retail sales per passenger than in 2011. Spending on the airport facilities is to slow over the next 5 years while charges rise. Colin Matthews wants to “make a fair and market return to shareholders.” It s largest shareholder is the consortium led by the Spanish Ferrovial group, which bought BAA for £10bn in 2006, although it has sold down its former majority holding to just over a third of shares. The sovereign wealth funds of Qatar, Singapore and China own a total of over 40%, with the rest held by Canadian pension fund CPDQ and private investment firm Alinda Capital Partners. Investors had spent £11bn on Heathrow since 2003 and would go elsewhere without returns. The airport paid a dividend of £240m last year, its first since the 2006 takeover. Click here to view full story…

February 12, 2013    Heathrow Airport has produced its business plan for Q6 (which is the 6th period of 5 years, from April 2014 -2019). It plans to spend some £3 billion on infrastructure, like work on Terminal 2. As Heathrow and the CAA over-estimated the number of passengers using Heathrow over the past 3 years, their income has been lower. Therefore Heathrow plans to raise its landing charges per passenger, by as much as 30 -40% by 2019 – much more than inflation. It said its prices “inevitably” had to rise in order to ensure a “fair return” to its investors. The CAA will publish its final decision on whether it has approved Heathrow’s proposals in January 2014. Launching the investment plans, Colin Matthews said the airport envisaged passenger numbers increasing from just under 70m now to around 72.6m by 2018-19. Heathrow’s 5-year plan is separate from any decision on whether a 3rd runway is built. Maximum airport charges allowed by the CAA are calculated using a complex formula taking into account the total value of Heathrow’s assets, return on capital invested and forecast number of passengers.    Click here to view full story…

Heathrow to raise its airline charges, from current £17 per passenger, to raise £3 billion for huge modernisation

February 3, 2013    Heathrow airport will announce modernisation plans later this month. These will cost some £3 billion and cover the period 2014 – 2019. This follows a £5bn investment plan between 2008 and 2013. Heathrow is also intending to increase its airline charges, with rises in costs rising from the current level of £17 per passenger to perhaps up to £25. These rises are above the level of inflation. Heathrow says it is raising the charge because it has had 10% fewer passengers than originally predicted using the airport recently due to the recession. This means Heathrow now has to cover a £646m shortfall and it needs to make up the difference by higher charges. Heathrow airport is also still paying for investments made in the new Terminals 2 and 5. Colin Matthews, the chief executive of Heathrow, says the modernisation is needed in order to keep Heathrow as the UK’s leading airport. The investmentwill include investment in Terminals 5 and 2, as well as improving baggage handling facilities and building new stands for the Airbus A380.   Click here to view full story…